During a one-day special session, the Oregon Legislature passed a bill to add certain sole proprietorships to the list of businesses that can get more tax cuts. Was the effort worth it? 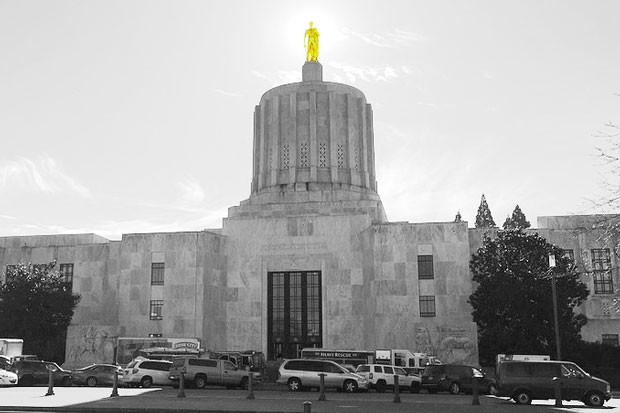 Dara Robertson is busy clipping hair in her northeast Bend salon, giving one of her customers a fresh spring 'do, while another sits in a chair—her head laced with tin foil, waiting for the dye to set. Robertson's Fringe hair salon is a sole proprietorship, and she's the only employee—which means Robertson won't benefit from the tax break passed on May 21 during the one-day special session, something she's not thrilled about.

"They're trying to make something that sounds good, but it's not really benefitting anyone," Robertson told the Source Weekly.

Gov. Kate Brown requested the Legislature pass House Bill 4301 to give specific sole proprietorships—businesses that have at least one part-time employee—a tax break similar to the 2013 tax break given to so-called "pass-through" businesses in Oregon, mostly partnerships and S corporations. Pass-through businesses are ones that don't pay corporate income tax or any entity-level tax, but instead pay taxes on profits that are passed through to the owners of the business, who add the profit to the rest of their individual income and pay taxes on all of it, explained Joe Rosenburg, a senior research associate at Urban-Brookings Tax Policy Institute, during a conversation with NPR's Robert Siegel.

In 2013, Gov. John Kitzhaber called a special session aimed at trimming public pension costs and raising taxes. What came out was a tax break that allowed people who owned pass-through businesses to pay just 7 percent tax on income under $250,000, the rate joint filers with income up to $17,400 paid, according to a story on Oregonlive.com. Non-business owners who make $250,000-plus per year pay 9.9 percent in state income taxes, according to taxbrackets.org.

Michael Addington, who owns Bend's Excellence in Taxes, said setting up a business as a Schedule C—the tax form sole proprietorships use—isn't ideal, except for businesses just starting out. Gov. Brown wanted to level the playing field for pass-through businesses by giving certain sole proprietorships the additional 2 percent tax break. Addington said for businesses that expect to make profits of at least $25,000 to $30,000 a year, he would recommend they set up as an S-corporation, and that LLCs or corporations are better because of potential liability.

Even though the measure passed the House 51 to 8 and the Senate 18 to 12, Sen. Brian Boquist, R-Dallas, said the tax break would only benefit about 6,000 mostly doctors and lawyers, and that he was filing an explanation of vote—a processing allowing members of the Legislature to verbally explain why they voted in a certain way. The explanation can't reflect on the honor or integrity of another member and must be relevant to the subject that was voted on. Senators Lew Frederick, D-Portland, and Kathleen Taylor, D-Milwaukie, also said they would file one.

Even though the idea of the bill was to help small businesses add employees by giving them a tax break, Robertson said she would change how her business was set up if she was to hire anyone.

"I would become a corporation, then I could declare the expenses of having an employee," Robertson said. "It sounds like you're doing something good, but if it only benefits 1 percent of the people, then go back to the drawing board."

The bill is expected to expand the tax break for pass-through businesses by $11 million, with most of the breaks going to the wealthiest sole proprietorships. According to data from the Oregon Legislative Revenue Office, over 40 percent of the non-farm sole proprietorships have income of $500,000 or more and another 30-plus percent between $200,000 and $490,000 per year. Of these businesses, nearly 15 percent are made up of healthcare and social assistant businesses. The next highest percentage is construction businesses.


"They're trying to make something that sounds good, but it's not really benefitting anyone." —Dara Robertson tweet this

Nearly 70 percent of the S corps and partnerships have income of over $500,000, according to the data from OLRO. Although the majority of pass-through businesses are small, some—like law firms or accounting offices—can be quite large, Rosenburg said on Siegel's show.

With some tax breaks, employees end up paying higher tax rates than the business' owners, even though the employees make less money. For instance, a part-time, minimum wage employee working in a medical office owned by a sole proprietor would make roughly $9,800 per year working 20 hours a week. The employee would be in the 9 percent tax bracket if filing single, while the owner would be paying 7 percent if they made under $250,000.

Not all of Brown's fellow Democrats were on board. Rep. Alissa Keny-Guyer, D-Portland, told Oregon Public Broadcasting she wasn't willing to vote for the proposed tax breaks when, "you're adding more people to a poorly designed tax credit without any sunset to evaluate it and you're taking money from schools, human services and housing."

Rep. Phil Barnhart, D-Eugene, chair of the House Revenue Committee, said there was no value in this tax break. "This is not one we should have on our books," he told OPB.

Sen. Tim Knopp, R-Bend, said during the special session, "We ought to reward the entrepreneurs that are hiring Oregonians. I urge your aye vote."