Motorcycles, Dogs and Horses, Oh My

Since "John Wick: Chapter 3 - Parabellum" raked in around $100 million across its opening weekend, it's obvious audiences haven't gotten tired of watching our man Keanu Reeves murder hundreds of faceless bad guys in new and original ways. Personally, I'm glad they haven't, because not only is this installment of the franchise the best one yet, it's easily the most jaw-dropping action film since "Mad Max: Fury Road." 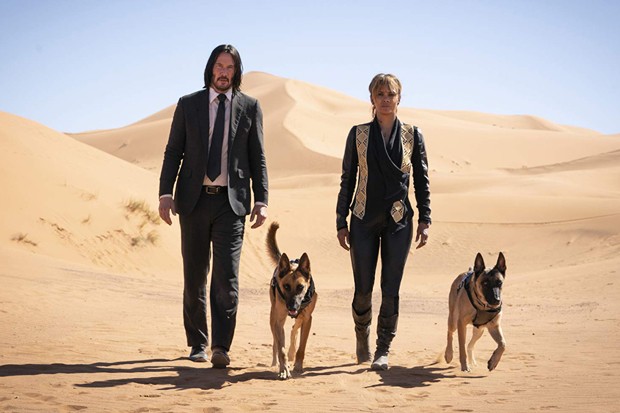 Pardon me for taking my hyper-violent action movies seriously, but the real star of these movies isn't the balletic action choreography or the perfect tough guy dialogue, but how screenwriter Derek Kolstad and director Chad Stahelski are deconstructing the myth of the anti-hero.

The first "John Wick" posed the question of what would the deadliest man on Earth do if he fell in love? And when that love is taken from him and he has nothing left to lose, how does a man like that know when he has left enough bodies in his wake?

"John Wick: Chapter 2" expanded the world of assassins, coins and mysterious hotels while simultaneously looking deeper into the black soul of Wick. As an assassin, his nickname is Baba Yaga, named after the legendary old crone considered to be a figure of malevolence, pain and worry. He half-heartedly retires from killing again, only to be pulled into the world even deeper than before. In the end he has a choice between letting go of his rage and walking away, or giving in to his murderous impulses and subjecting himself to a never-ending war.

He chooses to reap violence, leading to the events of "John Wick: Chapter 3 - Parabellum," which basically boil down to the movie being a 135-minute chase scene that still saves time for world-building and character moments.

There were definitely points in "Wick 2" which became a little exhausting. As good as Reeves looks firing a gun and judo chopping, the second film almost felt like too much of a good thing. Luckily, lessons are learned in "Wick 3," with varied and insane action set pieces featuring horses, attack dogs and a ninja fight on speeding motorcycles.

It's easy to overlook the "John Wick" franchise as brainless entertainment for action junkies, but it would be a shame to miss the nuance in Reeves' performance and the deconstruction of the heroic archetype. Wick starts the series as a man desperate for peace after the death of his wife, but after the death of his puppy, he becomes Baba Yaga again, a boogeyman who'll kill those who deserve it without hesitation.

These aren't "Fast and the Furious" movies. Wick changes, grows and eventually succumbs to the inherent violence of his upbringing. The dark thought that will keep this franchise going long after others crash and burn is whether he's happy to be forced back into a life of killing. He didn't want it, but now that he has it, maybe it's easier than trying to build a life without his wife.

"John Wick: Chapter 3 - Parabellum" is an instant classic filled with breathtaking martial arts, chases, killer dogs and a big, giant beating heart supplied by Reeves himself. In a just world, the Wick franchise would be the new Bond, only way less sexist and stupid. Doesn't that sound better?