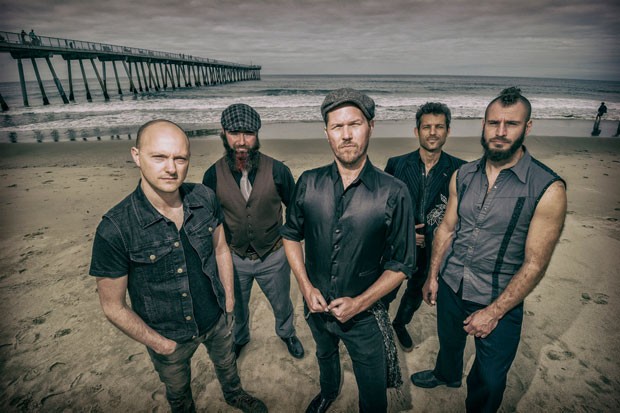 San Francisco's Diego's Umbrella has been pioneering its own brand of high-energy gypsy rock since 2001, and in the meantime have become touring favorites in Bend. A Diego's Umbrella show guarantees an evening of sweat-inducing dancing, with Jake Wood sure to join the crowd with his "party drum." The band oozes energy and knows how to rock the harder stuff—and while that's likely what you'll get when you go to the show this week, there's also a softer side of the band emerging.

Diego's Umbrella released a Christmas album earlier this month, taking on holiday classics as well as "The Christmas Revels," which showcase more intimate sounds. Dubbed 'Diego's Umbrella & Friends,' the Revels feature collaborations with multiple musicians. Contrary to what you may expect, this isn't a gypsy rock Christmas album.

"That soft underbelly has always been there, and we don't get a chance to show it off all that often because of the brand that we've fostered and we've worked on for almost our entire career. The gypsy punk, that's what people have come to expect and what they come for, why they love us," lead singer Vaughn Lindstrom says. "As our crowd is growing older and evolving as human beings, we can start bridging that gap of having a softer side and starting to show people that. People who maybe don't have such a big affinity with the harder stuff can identify with the softer stuff."

The album sounds softer and was also easier on the ears when it came to recording, editing and mixing. Lindstrom says this "Sunday afternoon" side of Diego's Umbrella was just easier to sit in a room and listen to—and to edit.

The idea of recording a Christmas album has come up every year for the band, but the timing never worked out until now. They recorded the album themselves, mostly while touring, reminiscing about going back to the garage style of self-recording they did on their first album nearly 20 years ago.

Of "Revels," Lindstrom describes, "... It blends our style and our sound. It's almost more of a folk, worldly sounding collection of songs."

There's also the collection of musicians, with the album featuring new voices not heard on other Diego's Umbrella albums. Kevin Souza contributes his huge, monster voice. One track is a poem that Lindstrom recruited an actor friend to read.

"We just had this wealth of talent around us, too much to not take advantage of," Lindstrom recalls. "I have a stepdaughter, and she sings along to everything I've recorded. Hearing her sing and be excited about these songs, I realized I want that energy—not only kids, but girls to add to that softness. It became more approachable as Diego's Umbrella and Friends."

Diego's Umbrella won't be playing songs from "The Christmas Revels" in Bend this time around, but Lindstrom says maybe next year they'll be able to take the softer side of Diego's Umbrella on the road. In the meantime, the album is available now.