Scientists detected that a 12-mile-circumference portion of South Sister was rising from magmatic phenomena 4 miles underground. It’s in the same area that scientists found uplift in the 1990s, and new technology is helping them better understand the phenomena. We spoke with Jon Major, Scientist-in-Charge at the Cascades Volcano Observatory, to learn more. 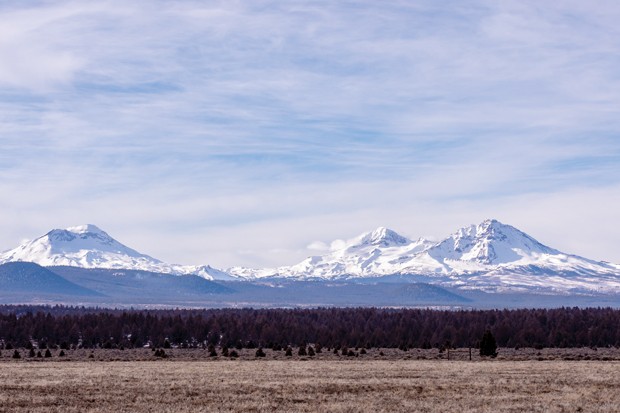 Source Weekly: What is uplift and how does it happen?

Jon Major: In very general terms, as magma moves from depth toward the surface of the Earth, it will break rocks and cause earthquakes, and it will cause the ground surface to lift up. Think of an inflating balloon, and the ground surface will lift and swell and the gases that are trapped within that magma will also start to come out of the, the magma will release the gases.

SW: When’s the last time you saw this much activity in the Sisters Complex?

In the early 2000s, the person who was analyzing these various types of radar images in the Cascades discovered that there was an area to the west of South Sister that showed some uplift, the ground service at uplifted by some number of inches. And so over time, we have been monitoring that. And in the in the late 1990s. The rate at which that ground was uplifting to the west of Three Sisters was uplifting at a rate of couple of inches per year. And then through time, the rate at which it was uplifting slowed down.

SW: What’s been the rate of uplift since then?

JM: The past decade or so, it had been up continuing to uplift but at a very small rates, like on the order of a millimeter or two a year. This past October, we had another very brief burst of really small earthquakes. And we had another brief burst happen in December and another one happened in January. And so we looked at that data, and the data was kind of noisy, but it seems to suggest that maybe the rate of uplift where a GPS station sits on the ground actually started to increase the rate at which it was moving.

On the basis of that we had the person whose specialty is looking at these radar images, pull some of the radar imagery, and what he discovered was that sometime between June of 2020 and August of 2021, so about a 14-month period, that indeed the rate of uplift in that area had increased slightly. And so, over that 14-month period for the maximum amount of uplift in that area was a little bit less than 1 inch. So that's what that's probably less than the length of your thumb. And this is over an area that's about 12 miles in diameter.

SW: That’s really incredible these satellites can be so precise.

JM: It’s pretty amazing to be able to check that. So think about that, it’s an area 12 miles in diameter, and we're detecting less than one inch of uplift. But noticing that that's a greater amount of uplift over that span of time than we had been seeing in many prior years. So that's, that's what that's kind of what got our attention.

When our geophysicists have examined the data, looking back into the 1990s, the interpretation is that that uplift was the result of some input of magma at a depth of about four miles below the surface. And prior to us even detecting that uplift, some other scientists had done some measurements of temperature and chemistry of spring waters in that area. And their analyses suggested that that the water temperatures and the chemistry of those waters had been influenced by the input of magma at some depth.

“What we don't know, because we've only got, 20-25 years of data is whether this is just part and parcel of the behavior of the Three Sisters area, or if this is something that's unusual.” —Jon Major tweet this

SW: Is this normal for the Three Sisters Complex?

JM: Inputs of magma in that area have probably been going on for centuries to millennia. And it's only with the advent of these newer technologies, in particular the satellite radar technology, that we've even be been able to detect this kind of activity around a volcano. What we don't know, because we've only got, 20-25 years of data is whether this is just part and parcel of the behavior of the Three Sisters area, or if this is something that's unusual, and, you know, we've never been able to really detect this before. So it's we're still grappling with trying to learn whether this has any meaning, and whether this is trying to tell us if sometime in the future, that that there will be an eruption in the Three Sisters, or this is just typical activity, and no, magma moves up to different depths beneath all our volcanoes in the Cascades. And in this case, we just happened to have a technology that managed to catch a manifestation of that input.