Before—or after—outdoor adventures, Matthew Williams offers a way to move stored-up pain out of the body

Matthew Williams has a goal: Helping clients move stored-up pain out of the body. As a board-certified structural integrationist, Williams says his work on the body can be intense at times. He calls the process, "movement re-education." 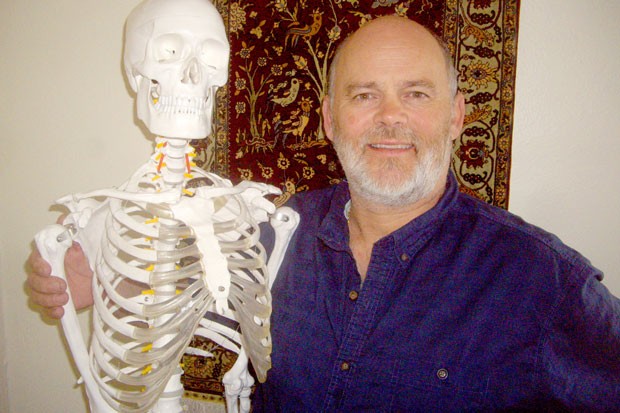 The goal is to develop a "recipe" for changing a person's habit of movements. "You can't fundamentally change someone right away," he says. "I'm not going to fix your pain, but I will show you a path, which always begins with awareness to make small adjustments." Slightly adjusting one part of the body leads to a different part of the body also moving, he says.

Williams' clients have included a 93-year-old woman who couldn't get out of bed at her rest home. After 30 minutes of work, she was able to get up on her own. He's also worked on a 15-year-old ballet dancer, a hemp farmer in his late 30s, and a landscaper in his mid 60s. All came to him with a physical pain or difficulty that they wanted to lessen and ideally, eliminate. The majority of his clients sign up for a 12-session series that he calls the "recipe." First, he offers a free consultation of a half-hour or so, "so that I can introduce them to what I do."

Williams says he wants to change habits that clients don't even know they have. This habitual movement helps form one's posture, he adds.

"It's kind of like a slow dance where we're both participating. I want them to find new ways to be in their body. The way that we work together is what's important. I move you and you move. Movements create habits and habits create your form, structure and your ability to function and do stuff. We might not be able to eliminate pain, but we can help people function better."

To help achieve his board-certified status, Williams did more than 500 hours of training with Thomas Myers in Maine. Myers, in turn, learned from Dr. Ida Pauline Rolf, who developed the "Rolfing" practice that is named after her. She died in 1979.

Recently, Williams—who also works with his hands as the drummer for local dance band, Chiringa—was in the process of rebranding his practice when a client's words struck a chord with him. While he was working along muscles and tissues, the longtime client looked up and told him, "Matthew, you sure are a merciful muscle masher."

Williams related this to his graphic designer, who saw it as M cubed. The new name took hold: M Cubed Structural Integration. The motto on his business card is, "Stand Taller, Feel Better."