Mt. Bachelor Opens Friday. Here's What to Have on Your Radar this Season | Local News | Bend | The Source Weekly - Bend, Oregon

Mt. Bachelor Opens Friday. Here's What to Have on Your Radar this Season

November 29, 2018
comment
With Mt. Bachelor set to open Friday, visitors will find the same chairlifts and runs they've enjoyed in past years—but they'll also find that a few things have changed at Oregon's biggest ski resort.

Here are some things to have on your radar as you dust off your winter gear and hit the mountain.

Dogs on the Mountain

Dogs are a common sight around Central Oregon—and also seen often at Mt. Bachelor. Bachelor's website now reminds people that pups are not allowed within the ski area boundary. Because Mt. Bachelor is on U.S. Forest Service land, they are required to follow Forest Service policies when it comes to dogs. According to Drew Jackson, director of marketing and communication for Mt. Bachelor, dogs that come to the mountain need to be on leashes except for the Mt. Bachelor Dog Park, located in the West Village parking lot. The dog park, now six to seven years old, opens after enough snow's fallen to plow it into a nice bowl, Jackson said.

RVs are another common sight in the West Village parking lot. Soon, RV users will be able to hook up to services like in a regular campground. Jackson said the 10 newly-added hookup sites are ready to go, but aren't online just yet. The cost per night will be released in the near future and Jackson said they will expand to 20 spots as soon as next summer.

Jackson said the RV hookup sites will be more expensive than the regular overnight camping prices, currently $20 per night, with additional vehicles costing $10 a night. Currently, people can buy a winter season overnight parking pass for $169. Jackson said people can camp or RV for seven nights in a row, but must leave for at least one night before they camp again. Jackson said the RV hookup sites are planned to have the same seven day restrictions, but people won't be able to purchase season passes and will have to reserve their spot on a night-by-night basis.

For people who skin up or hike to the Cinder Cone, know that the Winter Uphill Travel Policy is now in effect, with the Cinder Cone route the only uphill route open from now until the season closes. All other areas of the mountain are now closed to hiking. Even that route is only open when the sign at the start of the route says "Open."

Mt. Bachelor advises people check the uphill travel information and status online at mtbachelor.com/uphill before heading to the mountain. Also double-check the info available at the information kiosk, and read the signs while going up to be sure the portion of the route you're hiking is open at that time. Heavy machinery is sometimes out on the mountain doing grooming or other maintenance.

The Cone area is open 24-7 during the winter operating season, with the exception of times when grooming is happening, and during avalanche danger periods. 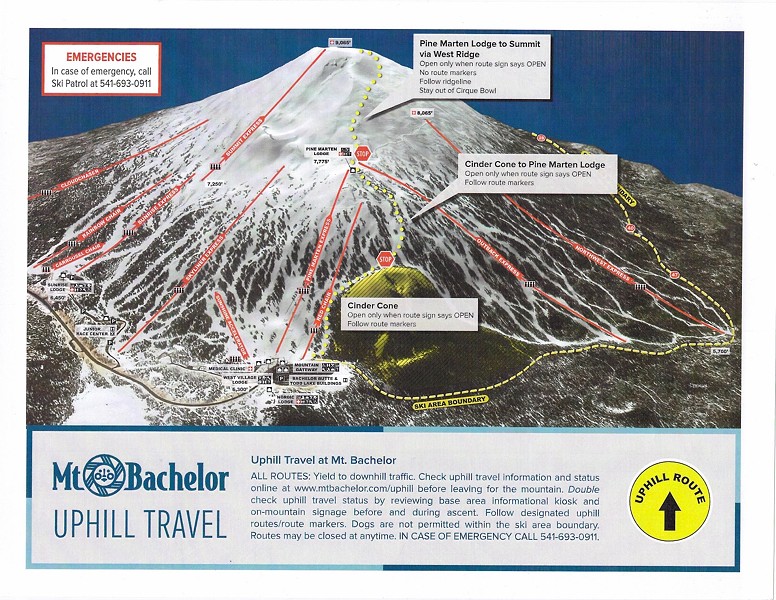 The Cinder Cone Route starts at the bottom of Red chairlift and ascends up the Leeway run to the saddle of the Cone. If you leave from the West Village, uphill travelers should stay to the right side of the bamboo poles marked with yellow discs running up Leeway. To get to the top of the Cone from the westside, uphill travelers need to stay north of Ed’s Garden run, in the trees off the groomed run. Bachelor says travel is permitted all the way around the Cone.

For the truly rugged, the Summit Route follows the West Ridge only—Bachelor asks people don’t ascend the cat track access to Northwest Express. The route is only open when Summit Express is running and the signs on the kiosks read OPEN.

Bachelor reminds people that routes can be closed at any time.