In honor of this week's Leaflet, we present these local meals that stoners love

In honor of our newest edition of the Leaflet, we set to work compiling a list of some of Bend's best munchie-friendly meals. From smothered burritos to loaded nuggets, we're convinced that this roundup will satiate even the strangest late night (or midday, or early morning) cravings. 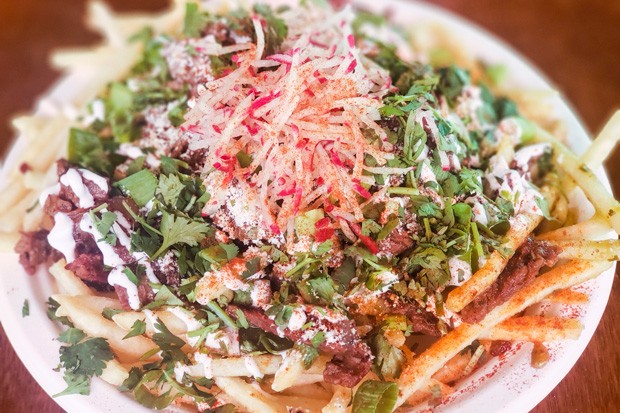 From homemade biscuits and gravy to freshly made bagel sandwiches, Rockin' Dave's breakfast menu is extensive and super munchie-friendly. One of the most decadent and extravagant menu items is The Spikoli, an inspired smothered burrito that has long-since been a local staple.

"Here's the story behind the Spikoli," explained Dave Flier, menu master and bagel shop owner. "Back in the day, when Rockin' Dave's wasn't open on Sundays, me and my girlfriend at the time were lounging around talking about what we wanted for breakfast. She wanted biscuits and gravy and I wanted a breakfast burrito. So, I decided to fuse the two; I added a diced-up biscuit and sausage to my breakfast burrito, which was already packed full of hash browns, eggs, cheese, caramelized onions and Tabasco sauce. Then I smothered it in sausage gravy! It seemed like a stoner's dream, so I named it 'The Spikoli' after Jeff Spicoli, Sean Penn's character in 'Fast Times at Ridgemont High.'"

When certain Bendites were asked about their favorite stony breakfast stop, more than a handful mentioned Los Jalapenos. Owner and chef Gonzalo Morales first opened the quirky turquoise taco shack in 1994, and has been masterminding authentic and tasty menu items ever since.

"Los Jalapenos is hands down one of my favorite places to go when I'm in da couch," said Bend local Whitney Cunningham. "They have some of the best breakfast burritos in town, and my absolute favorite is the Chorizo Burrito. It's stuffed with fresh chorizo, hash browns, eggs and cheese. You can add spinach to it, too, to feel like you kind of have your life together."

For those who are more inclined to throw a few back than burn a few down, happy hour was recently extended from 2 to 6pm daily, and features specialty margaritas and food specials.

Yes, you heard correctly. The Alley Dogz food cart recently found a new home at Midtown Yacht Club, but it is still serving up the same smothered, loaded goodness that Bendites have come to know and love. One of the most munchie-friendly menu items is undoubtedly the Loaded Chicken Nuggets: 10 chicken nuggets piled high with hot nacho cheese, ranch dressing, bacon and jalapenos. The food cart also serves up 100% beef chili cheese dogs, artisan grilled cheese sandwiches, hand-twisted pretzels and vegan bratwurst for the true herbivores in your friend group.

Smothered fries are people, too. Where to get them? Here ya go.

When I saw the price point, I thought to myself, "Hm, maybe I'll be getting a ramekin-sized portion." On the contrary. At Bangers & Brews, $4 gets you a giant portion of fully-loaded fries, complete with onions, sour cream and cheese.

A longtime staple of The Lot food cart pod, A' la Carte is known for its fresh Mexican cuisine and thin-cut shoestring fries. The Carne Asada Fries are topped with grilled steak, cotija cheese, salsa verde, green onion, cilantro and radish—and they hit the pot spot every single time. The Vladimir Poutine and Sweet Potato Curry fries are also worth checking out.