On May 15 the Bend City Council voted to move forward with the expansion of the city's mural code. This would mean that artists and building owners can collaborate to acquire permits to paint murals in any area of town—and not just in the Maker's District, as is currently on the books. 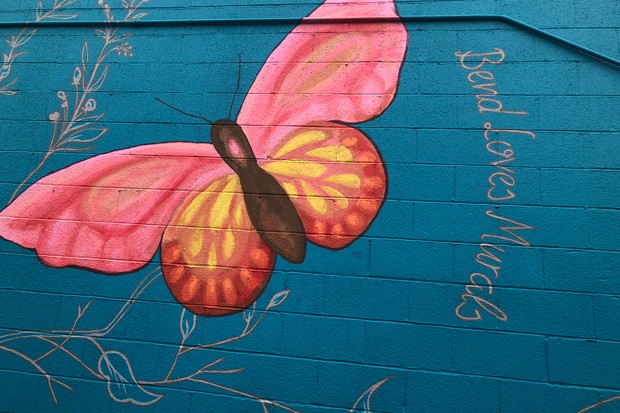 In April, Pine Ridge Elementary Assistant Principal Ned Myers approached the council, asking them to change the mural code after the project Pine Ridge fifth graders were working on was suddenly halted due to city codes.

City Councilor Barb Campbell made an emergency motion to allow the code to go into effect immediately, in order to honor the work the fifth graders have done, and so the mural could be completed without further delay. While they still won't be able to paint the mural this school year, as the code would go into effect July 1, they could complete it in the fall.

This also means Bendites could very quickly expand the beautification of the city. Murals give us a platform to speak to each other and to our visitors, telling the story of the people who live here and their dreams for the future. And how great is it that we have a city councilor who calls an emergency for art! The City Council will have a final vote on the matter June 5.

Figuratively Speaking, the five-woman exhibition currently on display at At Liberty, will be coming down at the end of the month. There is one more opportunity to creatively interact with this thoughtful and diverse show. Local poet and artist Krayna Castlebaum will host a Playful Poetry Workshop in the space on Friday, May 24, using the paintings as the prompts and inspiration for writing, including the work of Paula Bullwinkel, pulled from Franklin Crossing last month.

Castlebaum's approach to poetry is light and fun, allowing a safe space for reflection. If you've been wanting to write a little, but have felt shy, this is a great way to jump in, as Castlebaum's classes are warm and welcoming.

Editor's note: This version has been altered from its original version, which named artist Megan Myers as being part of the project Pine Ridge fifth graders were working on. We have found that statement to be erroneous. We regret the error.