A community mural project aimed at celebrating and bringing more visibility to Central Oregon's Latinx community is nearing completion in the Franklin Avenue railroad tunnel in downtown Bend. The project, titled Proyecto Mural, brought together local artists, a group of stakeholders from the Bend Central District and dozens of volunteers to complete the mural that now adorns the southern pedestrian tunnel under the railroad tracks along Franklin Avenue. The project is a complement to the mural in the northern pedestrian tunnel, "Two for Joy," completed by the late Kaycee Anseth in 2019.

Related The Artist Behind the Mural: The BCD's Franklin Avenue underpass project serves as a signal of hope; a bridge between two parts of Bend

The Artist Behind the Mural
The BCD's Franklin Avenue underpass project serves as a signal of hope; a bridge between two parts of Bend
By Laurel Brauns
Local News

As a community-created project, the images on the Proyecto Mural piece represent themes introduced by local people who live or work in the BCD and who hail from four Latin American countries, including Mexico, Cuba, El Salvador and Peru. The group selected two local artists, Carly Garzon Vargas and Melinda Martinez, to draw and paint the imagery. 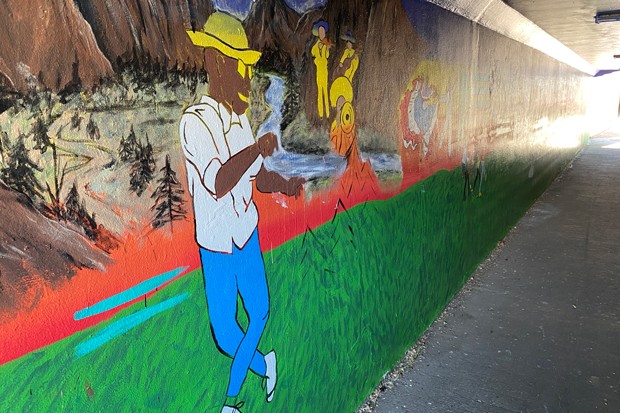 "It was important to bring in folks that were of a variety of perspectives and a variety of roles," said Janet Sarai Llerandi, founder of Mecca Bend, a local nonprofit offering resources for the Latinx community of Central Oregon. For the project, Mecca Bend partnered with Central Oregon LandWatch—the land use and policy planning organization that's spearheaded the Bend Central District initiative to foster an inclusive, vibrant mixed-use neighborhood east of downtown Bend.

The artists, stakeholders, and high schoolers from Central Oregon Community College's ¡AVANZA! program participated in a series of conversations about art, culture and place, all facilitated by an art therapist.

"What was really important to me and doing this with Mecca is that representation that needs to be brought forth," Llerandi told the Source Weekly. With the mural, its creators hope to bring more visibility and recognition to a portion of the community that is not often brought to the forefront. As the planning for the mural unfolded, more and deeper meanings for each of the themes began to emerge, Llerandi said.

“Part of this project is to bridge east and west, to bring attention to this really problematic area and to have a community-oriented way to re-envision it and really partner with the people on the ground.”—Moey Newbold tweet this

"The themes that you see in the actual art itself that were designed by Carly and Melinda were words essentially that we put together and helped guide and say, what is your priority, what matters to you, what do you love about your culture and how is that different than the culture that you're in now."

As Llerandi said, one stakeholder summed up the project perfectly by saying, "It's our stamp on Bend."

Adding more art to the area is just one element in an effort to bring not just beauty, but more safety to an area that can be unsafe for pedestrians and cyclists traveling to and from downtown to east Bend.

Related Big Town, Small City: The vision for the Bend Central District may get support through code changes and urban renewal revenues

Big Town, Small City
The vision for the Bend Central District may get support through code changes and urban renewal revenues
By Laurel Brauns
Local News

"Part of this project is to bridge east and west, to bring attention to this really problematic area and to have a community-oriented way to re-envision it and really partner with the people on the ground—including the unhoused people for whom sometimes it's their only shelter," said Moey Newbold, director of urban planning for COLW. 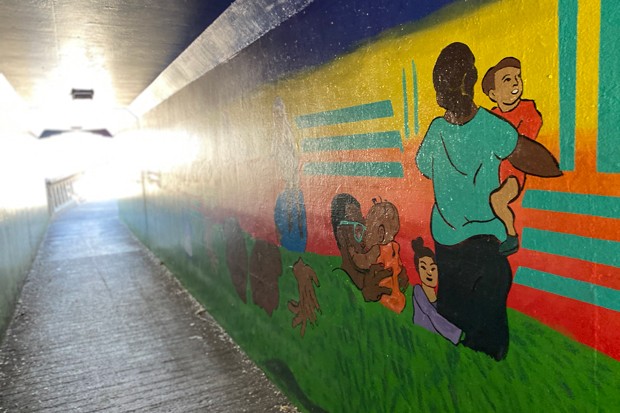 "It's been really positive," Newbold said of Proyecto Mural. "I personally love being down there and just being able to talk to the people who are walking or biking through. Many people do it on a very regular basis—people are excited to see some attention being paid to that area. They talk about how they would love to see the streets be safer."

Related Midtown Rising ▶ [With Video]: With Bend's "Zoom Town" status and its ongoing population boom, its scene needed room to grow. Enter Midtown, rising slowly but surely—and with a vision

Officially, the area around the Franklin Avenue underpass is part of the City of Bend's Core Area, a zone hugging the Bend Parkway that city leaders have identified as eligible for "streetscape improvements, public spaces, gateways, affordable housing, or art and beautification programs."

The people behind Proyecto Mural plan to have a grand opening celebration for the mural the weekend of June 12. People interested in attending can get more information at bcdinitiative.org.