Musicians in the Rear View 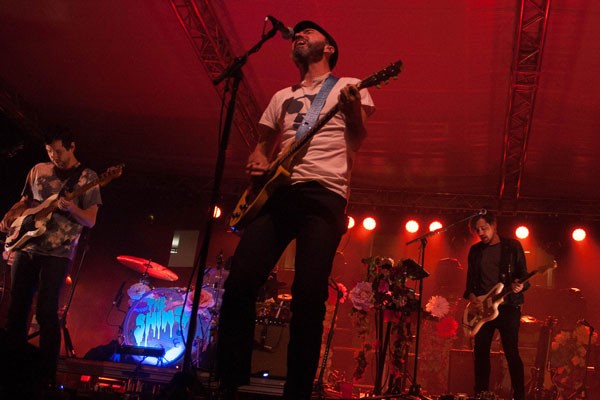 No matter how the year panned out for you from a personal angle, one thing becomes clear when reminiscing about 2017 — it was a damn good year for live music in Bend. After a couple year's hiatus, I returned to writing about music for The Source, giving me an awesome vantage point when observing and partaking in the live music scene. You guys. I talked to James Mercer, lead singer of The Shins, about one of my favorite movies of all time, "Garden State!" Talk about a dream come true.

Enjoy a few of my favorite quotes from throughout the year. Musicians in this town banded together to raise funds for victims of Hurricanes Irma and Maria, for local children in music programs and they all sharpened their skills to increase the level of talent in the Bend music scene. If you thought 2017 brought a wealth of talented musicians to Central Oregon, you haven't seen anything yet!

"The thing I love the most about being a performing songwriter is the connection you can make from yourself to a song and from that song to a person you've never met, never spoken to," Anna Rose said. "I think that's a powerful, impactful piece of our culture. Really human nature entirely. Connection is what makes us human, I believe. Music is one of the only things in this world that is truly universal, it has its own language that everyone inherently understands."

"Arts serve as an easy barrier or entry in terms of experiencing other cultures or identities and perspectives," Simon Young of The Slants said of using the arts to combat racism. "I think our music allows us to communicate those things through stories or lyrics. When people come to a concert, they're ready to be entertained, maybe ready to dance or to have a good time. It's kind of a great way to approach people on a deep level where they aren't necessarily defensive."

"For me, the big payoffs are just to be on stage and get to perform and play my songs and do what I love," G. Love said. "That's the payoff. That's the love. The work is the traveling and being away from home, but the music and the journey, like the journey of writing and making a record and physically journeying around the world, it's all something I really love. And honestly, the more I do it, the more I love it."

"There's a certain magic that happens sometimes while performing, where you're well practiced enough that you can put your intellect to the back of your mind and allow the feeling to come through," Evan Burton of Indubious says. "And you can channel things. Things come through. It's like this peak mystical experience where everyone's involved in this thing as it's happening, and the energy play back and forth of everyone in the room — it's a spiritual thing."

"You know what, I wanted to get to see the eclipse, but I won't get to see it," Karl Denson said ahead of his pre-eclipse bash in Bend. "I've been to Bend, but I want to see this group of people out in the desert who are out there to see this. That's the funnest part, the gathering of humanity."

"It's just an incredibly great community of people who are, what I call, soulrockers," Michael Franti said of Bend residents. "People who live from their heart, who have compassion for all and who have a tenacious enthusiasm for music, and for people, and for the planet. I really see that in the Bend community. People who have gravitated to live there love the outdoors, they love being physically active, they love living life to its fullest and sharing it with other people and at the same time protecting our beautiful wildlife and nature for generations to come."

"I love that stuff, that was one of the coolest things that ever happened to us," James Mercer said of being featured in "Garden State."

"Often in those situations, you already have a song recorded and you just need to say, 'Yes.' I love that crossover into other aspects of pop culture."

The Last Internationale - October 2017 - The Capitol

"Naturally, I gravitate towards music and so does Delilah, we love playing music," Edgey Pires says of The Last Internationale's use of music to express their beliefs. "If we have this platform to really be ourselves, because I think our band takes more of a genuine, authentic approach in the sense that we just want to say what's on our minds, whether it's a popular opinion or not. This is just how we feel as musicians. Certain topics aren't off limits because they may not be popular or it might jeopardize our career."

"I wanted to get them water and food somehow," Jamin Marshall says of the inhabitants of St. Thomas, affected by Hurricanes Irma and Maria. "A couple of my friends own a boat and make their own pizza on it. It's really neat. They were buying supplies in Puerto Rico prior to Maria. They were bringing water and food, taking people to Puerto Rico. When the second one (hurricane) hit, their whole operation became overworked. Now, they're looking for other people to help."

"My goal has never been to be a big famous rock star; obviously, I wouldn't hate the band being huge, but If I can play the songs I put myself into, that's what I want," Brandon Prinzing, lead singer of Riot on a Sunday, says. "I want people to come out and hear our music at our show, that's the dream. Being able to do this as a job. How I connect with what it makes me feel, other people are connecting too, it ascends to something better." .