The life and times of one remarkable creature

Editor's note: This story is the second in a two-part series chronicling how Jim Anderson became the human companion for a Great Horned Owl, found as a baby by a logger near Prineville in the '50s.

Wasn't he handsome? My feathered foster son, Owl, was just two years old when Bill Marsh made him the subject of his attempts to win awards at various photo contests, nationwide.

In all the years Owl and I knocked 'em dead at school assemblies around the Northwest, I think, in some owlish way, he knew he was good lookin'. When we'd walk into a school with him perched on my shoulder, the ladies in the office would exclaim, "Oh look! Isn't he handsome? Look at those eyes. Aren't they something to behold." Owl seemed to be holding his head in just the right way to give all the ladies his best profile.

I had made him a promise when we went to work with the Oregon Museum of Science and Industry: "Stick it out, old pal and behave yourself, and when we go back home, I'll turn you loose."

As I mentioned in the first part of this story, Owl imprinted on me when he was a baby and I became his mother, father and best pal for most of his life.

When John Gray hired me to come to Sunriver, my wife and I and our two sons moved into an old home on the banks of the Deschutes.

One night, after feeding Owl his nightly lab rat, I felt it was time to live up to my promise—so I left the door open and said, "OK, Owl, you performed your part of the adventure beautifully. My promise to let you return to the wild starts tonight. I'm leaving the door open. If you want to go exploring and look for a new home, there it is," and I walked away.

The next morning the mews were empty, but I left his breakfast sitting on his padded perch.

The rat sat there all day. The next morning it was still there and no sign of Owl. It went on like that for a week, even though I called him often.

Exactly one week later, Owl returned. When I came out that morning to check the mews, I heard him make a very quiet grunt behind me, and when I turned, I got the shock of my life: He had one good eye and one smashed eye.

You can imagine my concern. He allowed me to pick him up on the glove and that gave me a better look at his eye, which was worse than I thought. Nothing but a bloody mess.

The vet said the eye was so badly damaged he couldn't tell what was going on, or what to do. But he gave me a hint of how it got that way, "I have a hunch your pal got into a tussle with another owl. I'd like to know how the other guy looks..." Then added, "I'd have an ophthalmologist look at it." 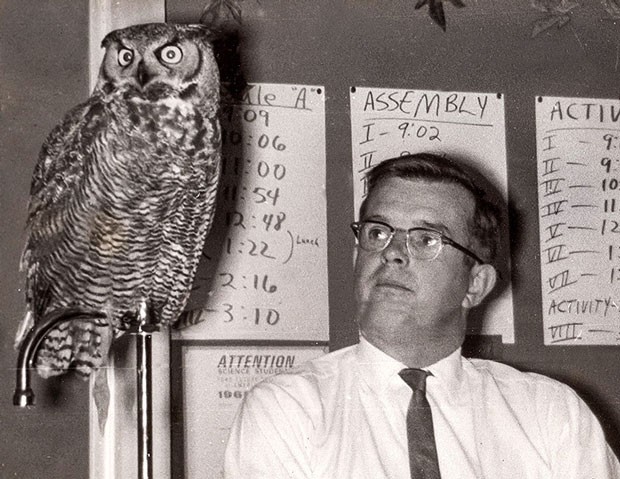 Three days later, that's what I did. I was scheduled to give a talk about the nature of Sunriver to the City Club in Portland and took Owl with me. An ophthalmologist in the audience came up and said if the owl behaved himself, he'd be able to give me a condition report.

We made an appointment for "Mr. Owl" to come into his office. I thought his receptionist was going to faint when we walked through the door with Owl on my shoulder.

Owl was well behaved and sat on the back of the examination chair quietly when the doctor placed the eye machinery over his beak. The prognostication was that the eye was ruined and couldn't be fixed.

Then the doctor placed the instrument in front of Owl's good eye. He spent several minutes looking into Owl's eye, then he slowly raised his head and quietly said, "This is like looking into the eye of God."

We went back home, and for years he and I continued to give numerous programs in Sunriver, and greater Central Oregon. He was also a regular fixture in my office.

When he was at the mews I fed him his lab rat and that went on without any more problems. Then we moved to a pole house adjacent to the main highway on the southern borders of Sunriver.

Owl was anxious to get out of his mews, but I kept him inside for a week and took him for walks on a leash to get him familiar with the new location. When I finally turned him loose, the first thing he did was try to cross the highway at night and was struck by a motor vehicle. I found him lying next to the house the next morning, alive but badly hurt.

His good eye didn't look all that good, so back into the mews he went to recover—which he did after several weeks of my soaking his eye with warm water. What I didn't know was his sight in that eye was ruined.

When I thought he was OK, I turned him loose again and he immediately flew to the top of a tree. He sat up there hooting and the response he received were three ravens who immediately started to maul him.

As he tried to get away, he floundered in the tops of the trees, making it all too obvious he couldn't see. I called out to him and he flew toward me, crashing into branches with the ravens hot on his tail.

I noticed when I called him, he immediately turned toward me, so I kept up a steady conversation going as he bounced off this-and-that limb, slowly descending my way. Following my voice, he landed on my outstretched bare hand, making small chittering noises as he gently got his feet under him.

What would you do if you saw one of your kids in a fix like that? I started to soothe Owl the best way I could, softly stroking his neck and back. He moved toward me, with what I would have said was a sigh if it came from a human. Suddenly I couldn't see him clearly anymore; my tears got the best of me.

That was the last time my Feathered Foster Son and I had a one-on-one personal moment. Life soon meant nothing to him anymore. I could see it in his attention span, his stance and in his breathing. Three days later I found him lying on the floor of his mews, his beautiful spirit having gone out among the stars.

Perhaps, if I've done things mostly right in this life, when I cross over that gulf between here and the Spirit World, I'll find it as my grandmother told us she saw it in her last breath, "Oh, it's so beautiful here..." and my feathered foster son, Owl will be waiting for me, perched on her hand.