From blending up gophers to owning up to the harvest of the neighbor's cat, our nature columnist recalls the days of having his very own Great Horned Owl

"Way back, when the Sun was a tiny thing and the Big Dipper was a little tin drinkin' cup," (thanks Reub Long) I was living in the Jones House in Bend with Dean and Lily Hollinshead. One evening the phone rang.

"This Jim Anderson, the wildlife guy?" a gruff voice asked. I said it was, and the voice responded, "I've got a baby bird. What do I feed it?"

Obviously, I couldn't answer that question without seeing the bird. "It looks like a tennis ball with a beak and big eyes," the caller said, adding, "It was in a pile of sticks at the top of a tree I felled over here by Prineville."

Adding all that up I responded, "I think it's probably a baby Great Horned Owl." He asked again what to feed it. 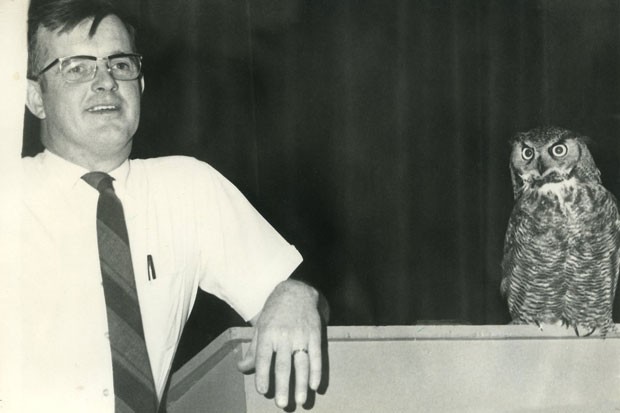 I told him he had to get a gopher, chew it up and swallow it, then spit it back up and feed it to the owl. I won't tell you what he said, but it was very colorful. Then he asked where I lived, and I told him.

His response surprised me, "Oh yeah, I know Dean and Lily. Dean and I logged together years ago and my wife knows Lily from her work with Tennessee Walkers."

About an hour later a pickup rolled into the yard and I went out on the back porch to welcome the visitors. There was mom, dad and two kids. Dad was carrying a small box.

The back door led to the kitchen, and we all went in. I placed the box on the kitchen table, opened it and there was that tennis ball with yellow eyes and jet-black pupils.

"Hot dog," I said, holding the owl up to see it better. "I was right, it is a baby Great Horned Owl."

"OK," my visitor said, "now look in the box." I did, and lo-and-behold, over in the corner was a dead gopher. I picked it up, held it up by the tail, and said, "By golly that's a pocket gopher."

I was in a pickle, but the Osterizer blender was sitting right there on the counter, so I tossed the gopher in, put the cover on and hit the switch. Ker-zamm! Gopher guts, bones and hide were splattered all over the inside of the jar. And I thought I was going to lose mom; she went white in the face and just stood there staring at the mess.

I removed the cover, and with my finger scraped off some guts, meat and bone and offered it to the little tennis ball. The minute the goop got in the owl's mouth it reached for more, and in a few minutes everything I could scrape off was in the owl.

"Well, that takes care of that," my logger friend said, adding, "Let's head for home," and went out the back door. The last to leave was mom. She kept looking back at the Osterizer and then at me.

I asked her if she was worried about the blender and she immediately exclaimed, "Yes! How are you going to clean it?" I told her I'd do it in the morning with the orange juice, and she put her hand over her mouth and ran for the pickup.

I was into wildlife rehab—hawks and owls especially—but I knew nothing about animals that imprinted on their keepers. And that's exactly what happened between that owl and me, who, by the way, I named, "Owl." 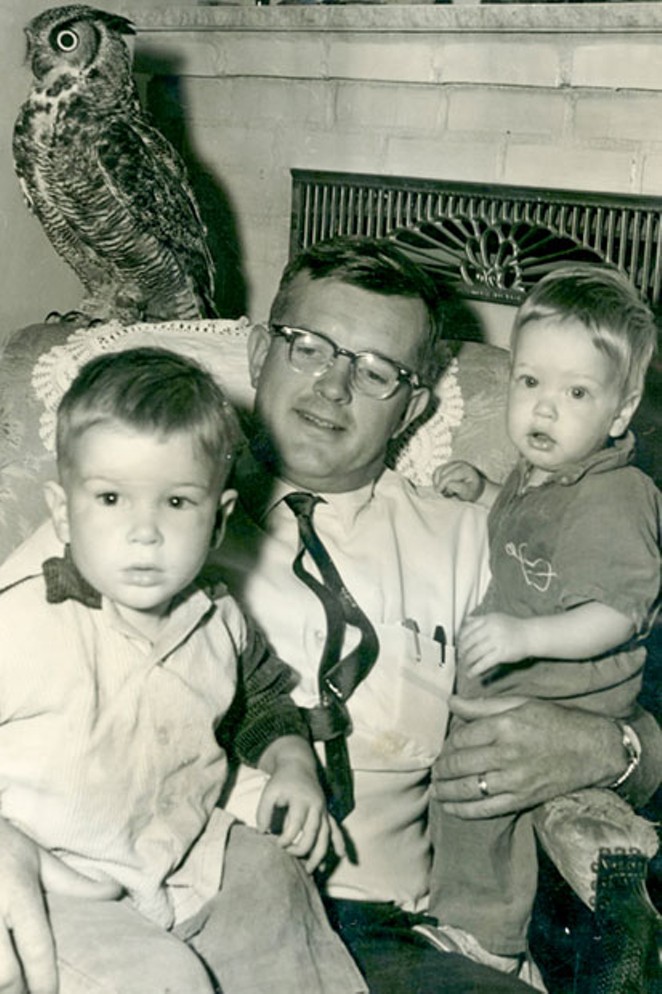 It stayed in a stick-and-straw-filled box on a shelf I built on the back porch and grew up there. I fed it in that location and it flew from that box on its own when it gained flight feathers. It stuck around and was there every morning and evening to be fed, and thanked me for very meal. I didn't realize it, but it became my foster son.

When I was hired to be the staff naturalist at the Oregon Museum of Science and Industry, Owl came with me. When I met and married Grant High School science teacher Harriet Randolph under the Big Pine on the Little Deschutes, Owl was my best man.

When Harriet presented me with first one son, Dean, and shortly thereafter another, Ross, Owl didn't give a hoot, but became their official babysitter and household companion.

Owl lived in the mews on top of my garage, and I'd often forget to close the door. One day as I was passing by, I noticed he was perched on the roof looking down at me. Just as I was about to pick up the ladder to put him inside, he opened his mouth wide and began to slowly rotate his head back and forth.

I'd never seen that behavior before and was very alarmed. Then he spit up a pellet. I automatically caught it in my hand and one glance told me I had never fed that animal to him; it was angora fur.

"Oh, no," I said again, and climbed up to the mews. Sure enough, over in the corner, under his padded perch laid a pile of angora fur. He had eaten my neighbor's cat.

About a week later my neighbor came over and asked, "Hey, Jim. I haven't seen my cat in a while. Have you seen him?" Not wanting to lie, I didn't.

"Yeah," I replied, "The last time I saw your cat he was over here for dinner."

Owl was also my partner when I gave wildlife lectures and conducted nature programs in the many, many schools and auditoriums we visited over the over eight years we spent at OMSI. One of Owl's favorite parts of those programs was flying around the room, auditorium, or whatever, and returning to land on my hand or microphone, where he would receive a delicious fresh-dead mouse, and then he'd thank me with a hoot over the microphone.

He had another stunt he loved when the auditorium had a balcony. He'd make a few laps beneath it, then zoom up over it, buzzing the audience. But instead of coming back to me on center stage, he'd perch on the railing in front of the balcony seats. I'd say over the microphone. "Don't look up! Please, don't look up...but if you do keep your mouth shut!"

Sure enough, after perching on the rail for a moment, he'd raise himself up and let go a load of mutes on the people below then fly down to me amid the rioting laughter.

When I became the first naturalist at the Sunriver Resort, our whole family, including Owl, moved back home to the dry side of the Cascades.