Just a few months before stepping into the Editor job a decade ago in 2012, I had seen Molly Ringwald present a confessional talk at The Moth; she talked about being a mom, and about recognizing that her middle-school daughter was a bully, and her abject frustration as that went against her entire life-philosophy and, as she saw it, all she had represented in the series of mid- ‘80s John Hughes films that had made her famous. She proclaimed that her roles in movies like “16 Candles” and “Pretty in Pink” and “Breakfast Club” were fundamentally about anti-bullying and about acceptance. Admitted, it was a much deeper reading and significance of Molly Ringwald than I had ever considered. 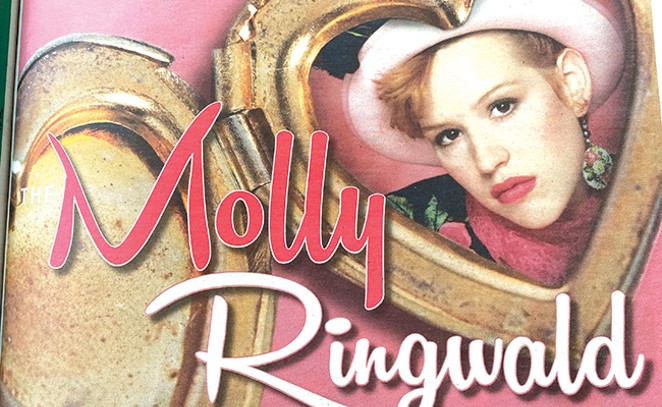 Coincidentally, Molly Ringwald was touring the West Coast with a jazz band, and scheduled to play the Tower Theatre the same month I was scheduled to start my job at the Source. Even before becoming one of the most recognizable faces of the silver screen in the 1980s, she had played stages as a kid as part of her dad’s traveling jazz band. Although she has since returned to acting (playing Archie’s mom in “Riverdale”), at the time, in 2012, she largely had been in celebrity hibernation for the previous 15 years or so—and her jazz tour and talks at The Moth were a half-step back to public life.

We were pleased to welcome her back—and to do so in as grand fashion as a weekly newspaper in Central Oregon could do. As one of my first acts as the editor, I decided to dedicate the entire issue to Molly Ringwald; some in earnest, some tongue-in-check. Our production manager at the time, Jen Hornstein, designed a captivating cover for the issue showing the freckled-face Molly Ringwald in an oversized gold locket. One of the staff interviewed her. We pointed out her contributions to music (mainly introducing American teenagers to Psychedelic Furs). We reviewed local eateries by matching menus to which character from “Breakfast Club” we thought would most enjoy the food (like, Ringwald’s Claire at the now-closed local sushi joint, Boken); and, we wrote about how Molly Ringwald and Generation X had grown up from disaffected MTV teenagers: “They are CEOs of companies that put community in front of bottom lines,” we wrote. “They recycle. They fret about and prioritize good parenting. They garden, and have ushered in a deeply sincere lifestyle of seventh-generation sustainability. They elected the nation’s first Black president, and, perhaps most spot-on to the Breakfast Club’s themes, have shifted a national attitude away from bullying and toward magnanimous acceptance of any creed, ethnicity or sexual orientation.” (Mind you, this was three-and-half years before Donald Trump’s presidency and nearly eight before the January 6 insurrection.)

In many ways, that Molly Ringwald issue set a tone for my three-year tenure; after all, the central function of the Source is, at one level, to provide information about civic and cultural happenings, but also at a higher level as a platform to test-drive new thoughts. To coin a phrase, the Source is about considering how Bend fits into the larger global culture, while doing so with a decidedly local flavor—and it has been doing so for a quarter-century, which is its own
cultural phenomena.