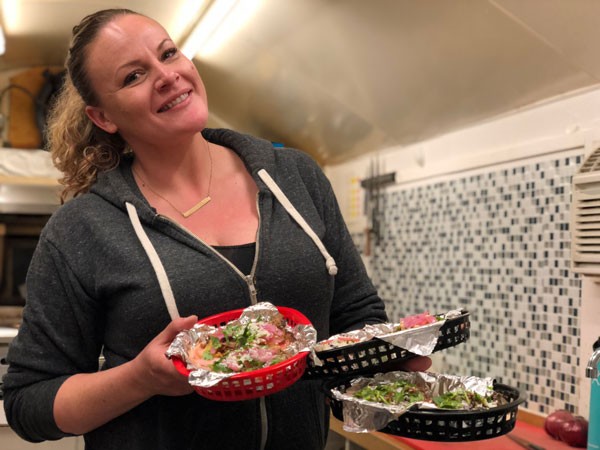 A reader, Jay Whitney, wrote in to tell us about eating at the Westside Taco Co., saying they were the "best tacos I have literally ever had." With that encouragement, I drove to Redmond to see if Whitney was right.

The Westside Taco Co. is parked at Kobold Brewing on 6th Street, across from the Sears. In the truck window, you can find the menu for the tacos and "other stuff," including chips and salsa. Almost everything at The Westside Taco Co. is made from scratch, with local ingredients, so the offerings change frequently based on what's available. There's seating on the patio with a fire pit, but we opted to place our order and sit inside Kobold to grab a beer. 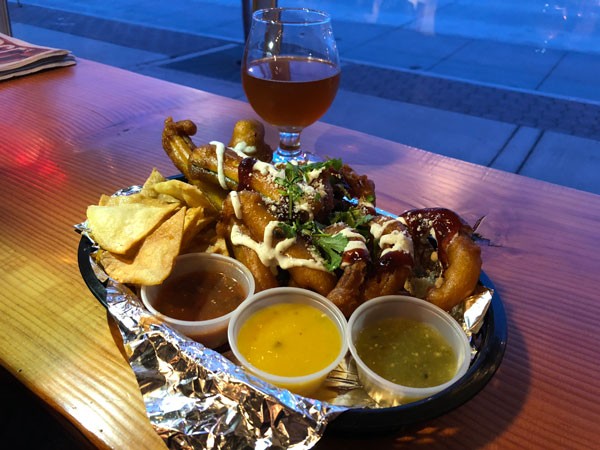 We started with a sampler of chips, salsa and stout-battered and fried zucchini and onion rings. The tortilla chips were freshly fried and thick, perfect for soaking up the three types of salsa. The hot red salsa was my favorite; roasted, smoky and tangy. The mango habanero salsa was on the edge of being too sweet but then it swung into spiciness on the back of my tongue—that sweet-hot combo that makes you eat way too many chips. The tomatillo verde salsa was the mildest, but it still had a good kick and a lot of tang. Drizzled on top of the zucchini and onion rings was a smoky barbecue sauce and crema. We could eat those sections on their own, but the naked ones I dipped in each kind of salsa. This was the perfect food to pair with my beer.

Before I get to those tacos, the Westside Taco Co. isn't new. Chef-owner Amber Amos started the restaurant in Southern California after having a successful catering company. She said, "Everyone always asked where to go for great tacos. After referring so many people, I just wanted to be that place." She aimed to make street food, but elevated. Amos was classically French trained at Le Cordon Bleu and says she's "done stuffy food, foam, nitrogen... it's not who I am. I like food that reminds me of vacations I've been on."

Amos had a really successful business on her hands, but didn't want to raise her two boys in California, so she let her staff continue to run the business and she returned to her home state of Oregon. Last July she opened the Westside Taco Co. food truck at Kobold.

Now, about those tacos. Amos makes her tacos from scratch, pushing masa, a corn flour dough, through a hand-cranked tortilla press. She added beet juice to the masa, resulting in marbled pink tortillas that she immediately places on the grill top. When the tortillas and fillings are cooked she builds the tacos with house-made sauces and escabeche, Mexican pickled vegetables. The final layer is crumbled cotija cheese and fresh cilantro.

In addition to those more traditional ingredients, the tacos are packed with creative fillings: blueberry brisket barbacoa, root beer carnitas, red Thai curry, poblano chicken and buffalo chicken. We tried them all. The fresh tortillas are thick, so unlike flimsy store-bought tortillas, they can hold a lot of toppings without falling apart. They also have a good bite to them. The barbacoa and carnitas tacos were rich and satisfying. The poblano chicken and the red Thai curry packed the most punch in tanginess and heat. Amos has a deft hand with her use of sauces and pickled vegetables, turning the tacos into perfect, filling, flavor bundles.

Amos had a second Westside Taco Co. truck in Bend at the Deschutes Brewery on Simpson for a while, but says the spot didn't get a lot of foot traffic. Amos is currently looking for a new permanent location in Bend. Until then it will be well worth the drive to Redmond to satisfy your taco cravings.