Name It; He's Probably Done It 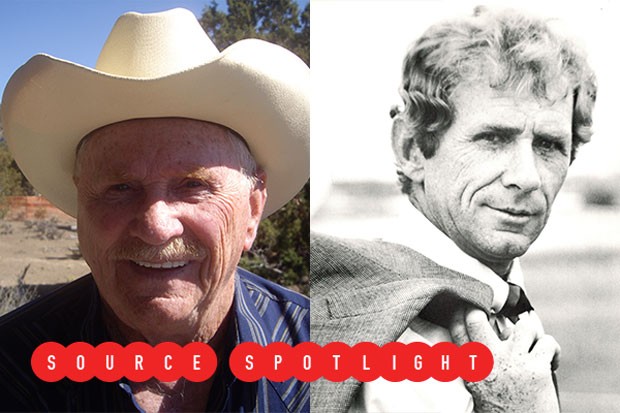 Jared McVay says a few weeks ago, his publisher told him that among Amazon's book sales worldwide, Stephen King is rated at number 19. McVay asked what that had to do with him. His publisher responded, "You're number 20."

But through 12 books and counting, it's doubtful that any of the fictional characters McVay dreamed up could have had as many thrilling adventures as he's had.

"I'm one of those guys who always want to see what's on the other side of the hill," McVay says. "People tell me that I've lived a whole bunch of lives."

McVay, 78, says he was born in a "shack down by the river" outside of Eureka, Kansas, delivered by a midwife, and grew up poor. He says he left home at 14—as soon as he could earn a driver's license at that time, working his way through high school and college.

He started hopping trains in 1951, when he was 11 and in the sixth grade. He remembers one engineer, a huge man named "Taillight Tipton," who at a slow spot on his run, would lean down and help pull McVay up into his cab. He told McVay, "If you're going to ride my train, I want to keep an eye on you."

This rail-riding habit enabled McVay to see all the contiguous states, as well as Canada and Mexico City by the time he was 18. McVay said when school let out for the summer, he'd just go "hobo-ing'" for three months.


On the other hand, McVay says that through his interactions with Charlton Heston, he learned "not to be a pompous ass." They both served on SAG committees and used to butt heads, he adds. tweet this

As a member of the Screen Actors Guild, he's appeared in more than 40 movies, 20 television shows and 100 commercials, including bit parts in popular shows such as "Gomer Pyle, U.S.M.C." and "Hill Street Blues." He's also worked as a screenwriter and director.

He says he was in about four hours of the 26-hour mini-series, "Centennial," playing opposite actors Brian Keith and former Detroit Lion Alex Karris. And he still gets residuals from TV shows including "Malcolm in the Middle" and "Ally McBeal."

About four months ago, he and his wife, Jerri, moved to Brasada Ranch from Lynnwood, Wash., where it had grown too crowded for their liking.

"We've met nice people here, and it's nice and quiet," he adds.

McVay started writing books about six years ago. His first book came out in 2012, a children's book titled "Bears, Bicycles & Broomsticks." He's written eight western books in the cowboy "Clay Brentwood" series that takes place in the 1800s. "I get emails from women who say they're in love with Clay Brentwood," he chuckles.

He's also half finished with the first book in another series, "The Adventures of Kathleen McClusky." It opens northeast of Redmond, Ore., where the heroine has spent three days climbing out of an abandoned well into which she'd been thrown.

The couple recently flew to Orlando, Fla., where McVay had a book signing. He has another signing scheduled for later this month at Herringbone Bookstore in downtown Redmond. Wife Jerri gets the first read of his manuscripts and helps keep his writing in line before it's sent off to the publisher.

With no formal acting training to speak of, McVay says he learned the tricks of that early career from watching "the pros" up close. One of those was Jimmy Stewart, who would become a close friend. "I felt very honored to be considered a friend. If I had a thrill about anything, it would be that. He was quite a gentleman." Stewart also offered him direction: "Know your lines and know your character. That's the best advice you can give to any actor. If you know your character, the lines come naturally."

On the other hand, McVay says that through his interactions with Charlton Heston, he learned "not to be a pompous ass." They both served on SAG committees and used to butt heads, he adds.

McVay says his acting earned him "good money," so much that he took a year and a half in the mid-1980s to solo sail around the world in a 34-foot sloop re-engineered to right itself in stormy seas.

These days, McVay gets up around 5:30 am six to seven days a week, writing until noon or so, aiming to write 2,000-3,000 words a day. He says he can get a book to his publisher in about three months.

When he's not writing, McVay enjoys reading, watching movies and fishing. "It's a fun life," he muses, adding, "or as Jimmy would say, it's a wonderful life."