Natural World: Once they're gone...

As a (sometimes extreme) conservationist, I find the idea of human-caused, species extinction, incomprehensible and unforgivable. In short, we know better. When a species is extinct, it's gone. Done. Kaput. Dead forever.

Our power to send a species into oblivion was first documented in 1598 when Portuguese sailors landing on the shores of the Southeast African island of Mauritius, discovered a previously unknown species of gigantic pigeon, the dodo, Raphus cucullatus, so named for its lack of fear of men who killed them. Another aspect of their demise were the confounded rats that deserted the ships and came ashore to help eat native animals and plants into extinction.

Having been isolated from contact with humanity by its island location, the immense pigeon waddled over and greeted the new visitors with a child-like innocence. The sailors, however, mistook the gentle spirit of the dodo, and its lack of fear for stupidity and dubbed the bird "dodo" (similar to simpleton in Portuguese).

Because the bird was larger than our Thanksgiving turkey — but far easier to catch — hungry sailors killed them by the tens of thousands and those that survived the sailor's appetite had to face introduced rats, cats and dogs.

Dogs, pigs and rats carried-on ships soon became feral after being released into the Mauritian ecosystem. Due to the sailors meat-hunting and predation by introduced animals, in a mere 83 years, the last dodo was dead.

The world was left worse with its passing.

As one of the earliest recorded examples of modern eco-vandalism, the impact of the Portuguese sailors on Mauritius not only wiped out the poor old dodo, but also further disrupted nature in unexpected ways. Soon after the dodo became extinct, the Mauritian "calvaria" trees seeds stopped sprouting and it appeared it would soon face extinction itself. Apparently, calvaria seeds would only germinate after passing through the dodo bird's digestive system.

You'd think with the story of the dodo bird as an example of our ability to wipe out a species we would have been more sensitive to our responsibilities. The fate of the passenger pigeon proved otherwise as they were perhaps the most abundant bird ever to live on the face of the earth. 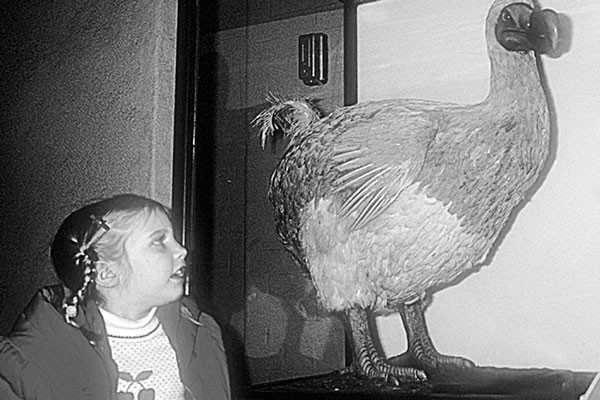 In the early 1800s they were estimated to be in the billions and could be found in forests from the east side of the rockies to upper New York state. Moreover, when they migrated to their southern haunts in winter, millions of them were seen in immense flights — over a mile-wide and 300 miles long — so many birds they blotted out the sun. The sun!

Passenger pigeons nested in colonies of such magnitude it is almost unbelievable — over 100 nests in just one tree. Multiply that by millions of trees in hardwood forests throughout the Midwest and East and you come up with billions of birds.

Unfortunately, it was those 300-mile long flocks of passenger pigeons that led to their demise; meat hunters selling their remains to the hotels in New York believed they were inexhaustible.

Passenger pigeons were a little larger than present day rock doves and flew just about as fast – close to 60 miles an hour. Hunters who didn't want to waste ammunition trying to hit such a fast flyer found it was a lot easier to kill them when they were nesting — as the plume-hunters discovered in the early 1900s when they slaughtered egrets, just for their feathers to put in lady's hats.

Pigeons killed at the nesting sites left eggs and young to die; consequently the fate of the passenger pigeon was sealed. Only one egg was laid normally, incubated by the female and fed by both parents, but only until the youngster could stand and had feathers. About two weeks after hatching the adults just up and deserted the chick, leaving it to fend for itself.

With the advent of the telegraph, meat-hunters knew exactly where pigeons were at all times, and exactly when they arrived at the nesting trees and then set about slaughtering them. Only the breasts were taken, packed in ice and delivered by train to expensive restaurants in New York and other eastern cities.

By 1910, there was only one female passenger pigeon left on Earth, Martha (named after Martha Washington, wife of the first president of our country), living in the Cincinnati Zoo. At 1pm, on Sept. 1, 1914, Martha died at the age of 29 years.

Looking at the growing population of American bald eagles flying around Oregon today, I'm so thankful that we have learned a lesson from the passing of the dodo bird and passenger pigeon. But as I look at the destruction of our greater sage grouse habitat, converted into cow pastures and the new dictate from President Trump cutting up our national parks, I wonder, "Have we really learned our lesson?"