Winter among the "lower animals" 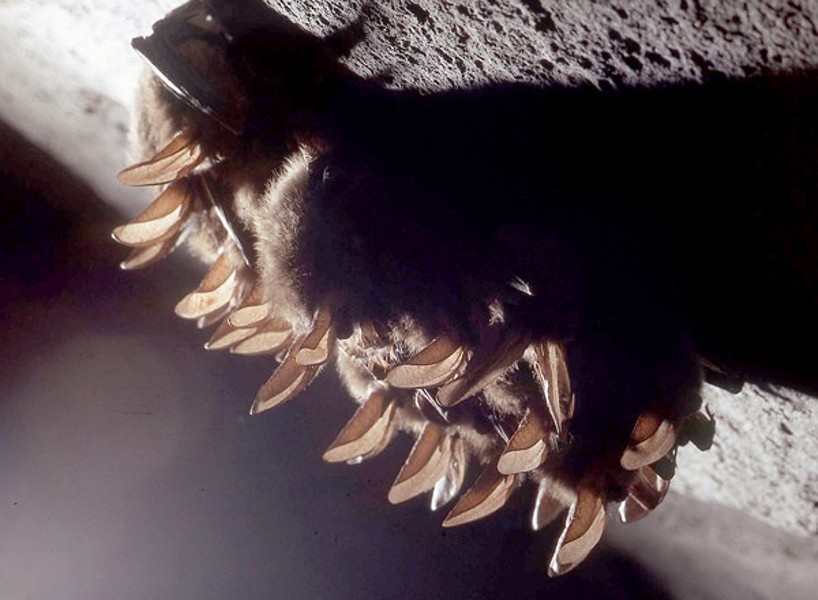 Jim Anderson A group of Townsend's Big-earded Bats waking up from their winter nap.

Did ya' ever stop to think...? Out there in that nice big woodpile you're consuming this winter there are any number of insects, spiders and other six and eight-legged creatures sleeping away the winter. (What a rude awakening it must be when they suddenly find themselves in the consuming breath of the old wood stove!)

When you walk across the grass in your front yard, please don't stomp your feet; there are hundreds of other creatures down there, sleeping away the winter. While out in the hayfields hundreds of ground squirrels are snoring away. (But not gophers, they're food for the beautiful Rough-legged hawks that come down from the Arctic Circle to spend winter with us.)

In summer, there's a very special bird we see on our forest roads that sleeps away winter: the Common poorwill, the smallest of the nightjars. If you were watching the road ahead of you on a night in summer, you may have seen its huge eyes shining back at you just before it flew up in front of you.

You could have mistaken the poorwill for another nightjar, our Common nighthawk, but poorwills are half their size. While "our" nighthawks at this moment are gobbling up nocturnal insects in Central and South America, the poorwills are actually still in North America, but sleeping it off in the southern parts of their range.

In 1948, Dr. Edmund Jaeger, a biology teacher from Riverside Junior College in California, was out birding with a group of students in nearby creek washes, when one of the group saw what appeared to be the back end of a nightjar protruding from the stream bank and roots of the willows and oaks.

Curious (as most teachers are), Jaeger took a closer look at the bird and noticed it appeared to be dead, but when he and his students picked it up to examine it they noticed it was warm. Lo-and-behold, they became the first humans to report a bird going into a state of hibernation, but not the first to see it.

However, the Native American Hopi people were aware of the poorwill's behavior long before anyone even dreamed of such things, as their name for this bird is, hölchko, which translates to, "The Sleeping One."

Even the great scientist and explorer, Meriweather Lewis didn't catch on that poorwills hibernate when he and his side-kick, Lewis Clark found them in the torpid state while going through the Dakotas in 1804. They did mention them in their journals, but didn't recognize them as something different from the whippoorwills of the East, or that they were hibernating.

Hibernation is the process that puts an animal into a deep sleep where breathing and heart rate slow down to a hairline between life and death. However, to hibernate, the animal going into that state must have a suitable layer of fat. The fat is metabolized to make food and (and water) for the animal's s-l-o-w-l-y circulating blood.

The larger burrowing rodents we see running around Central Oregon in summer sleep all through winter. Yellow-bellied Marmots, California, Belding's, Merriam's, Columbia, and Washington ground squirrels spend up to seven months sleeping. They appear above ground in March, while the new ones and survivors (Bald Eagles love to play football with them) have gone back to bed by late July.

During those short five months above ground, they reproduce and eat, eat, eat and eat. Believe it or not, the Belding's ground squirrel's favorite food is dandelions (and you thought it was hay). If, however, they happen to come across insects, birds' eggs, worms—or one of their dead brethren on the road—they will consume that as well.

We need water to keep our blood healthy; during hibernation that's taken care of with water metabolized out of the fat. "But..." you may ask, "what about elimination of waste water afterwards urine?"

Amazingly, the urea is recycled and turned back into protein, as packrats do. (Packrats—which do not hibernate and rarely drink water; they recycle water so many times the waste is almost pure urea; there's so much in the urine that it coats the rocks near the packrat's den almost pure white, instead of the characteristic yellow.) Which reminds me, don't eat yellow snow!

From my experience, bats are the deepest hibernators of all. When I was studying and banding bats in the lava caves near Bend in the '70s, I'd often remove a bat carefully from their head-down perch on the cave ceiling; photograph, weigh and band it, and it wouldn't wake up.

Some of the most interesting hibernators, however, are butterflies and moths. While our Monarchs have migrated to Mexico and California to escape winter, our swallowtail butterflies and moths are wintering over as either eggs, or wrapped in the silk of their chrysalides and cocoons.

However, Mourning Cloaks and California Tortiseshells winter over as adults. What's neat is that in all stages, insects possess an antifreeze in their "blood" that protects them from freezing, even way below zero! And here we are, freezing our what's it off... It makes one wonder who these so-called, "lower animals" really are.