Spiders on my keyboard

o, there I was, sitting at my desk with hacklemesh spiders in the forefront of my old, tired, almost-worn- out brain, when a hot-to-trot house spider suddenly ran down my face, onto my shirt, and vanished under my chair. Talk about being at the right place at the right time; it was followed by three more speedy little arachnids running across the keyboard of my old MacBook.

My wife, Sue, doesn't come into my office unless she really has to, because I will not destroy (as in clean up) the spiderwebs on my windows, walls, floor and ceiling. Not that she's afraid of spiders—but she's not a happy camper with all my litter, because I won't go along with "dusting" and other household chores that destroy spider webs and make things "neat" in my sanctum.

One day she caught me putting a bathtub spider in the clothes closet, and you can imagine how that went over. Now they get dumped out under the back porch.

You see, there are black widows under my house (and probably yours as well). Quite a few of them. They find plenty to eat to keep them happy down there with all the invertebrates—and vertebrates, such as disease carrying insects, white-footed mice and the occasional Pacific tree frog that occupy that cool, damp space. Plus, black widows would rather live in the dark. It's not uncommon to find dead, white-footed mice and occasional tree frogs sucked dry and suspended in a black-widow snare in the darkness under the house. 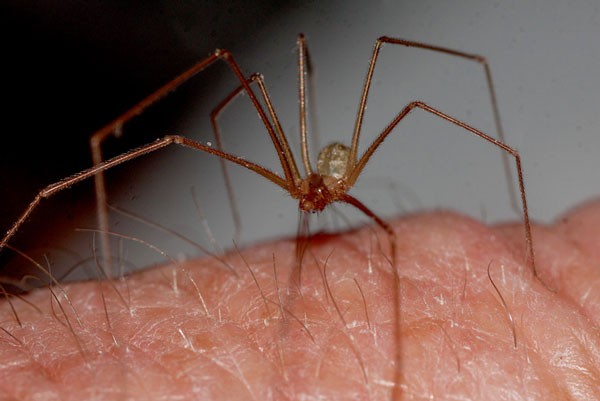 Which reminds me of my favorite spider story: Back in the mid-'60s I met a most wonderful man by the name of Ross Nicholas in Portland. I was working for the Oregon Museum of Science and Industry, and Ross called the museum to see if we wanted his boxes of bird's eggs and bird study skins. Having no family, he was going to a nursing home in Hillsboro.

He had collected the eggs and birds with William L. Finley and Herman T. Bohlman around 1906, and also had several of Bohlman's beautiful old bird photographs. During our delightful conversation about his adventures with Finley and Bohlman, he so thrilled my wife and I that we gave our #2 son the name Ross. At the time, he also mentioned he was a founder of the Multnomah Athletic Cub and built canoes for hauling freight around Cascade Locks. What a guy!

Ross told me he had some of his historic homemade paddles in his basement, and if I wanted them, we could go down and get them. When we opened the outside cellar doors, I heard the familiar breaking glass sound of black-widow webs crackling. As Ross started into the dark basement, probing ahead by waving his hands for the pull chain on the ancient light hanging from the ceiling, I could see all too many black-widow's egg sacks hanging in the silk webbing. Without hesitation he plowed right into them, crashing through the webbing, sending spiders and egg sacks flying in all directions.

It gave me the creeps watching him trashing around in that crackling webbing and ultimately black widows crawling all over us, so I said, very loudly: "Ross! Do you know what these spiders are?"

"Sure," he mumbled, pulling on the string that clicked the 40-watt bulb on. "They're black widows; they've been living down here long before my sister and I moved in over 50 years ago. They're happy down here, and don't bother me and I don't bother them." At that he arrived near the furnace where three beautifully hand-carved canoe paddles were stacked against the coal bin. "Here," he said, wiping black widow spiders, silk and eggs sacks off of the paddles. What a guy!

Back to now... Why all those spiders came wandering through my "office" while I was writing the piece on the hacklemesh spiders, I have no idea. I hope it was just coincidence, but you just never know...

Jumper spiders and cellar spiders do not spin a web, so just their presence on my keyboard was a lovely surprise; the jumper snuck in from outside, but the cellar spider probably got out of the crawl space under the house before it became food for one of the widows.

The cellar spider was a female, but the jumper is a full adult male. His pedipalps (mating devices, aka "boxing gloves") are below the spider's huge main eyes, located between his first pair of legs, and testify to his being an adult male.

So, with these thoughts in mind, may I suggest your life will be a lot more fun if you take the time to see and enjoy those tiny spiders that may occupy your home and office.

However, on the other hand, if you don't enjoy going out the back door in the morning and running head-on into one of the larger Charlotte's cake platter-sized silken orb webs, put out a bird feeder for chickadees. They and their sharp-eyed cousins, the nuthatches, have cleaned me out of Charlottes. Those little feathered spider-getters live up to the names: gleaners, as they plunder the eves of my house for anything with six or eight legs to gobble up.

Sheroes: Healing with Acupuncture and Herbs