Elephant Lessons: Expert coming to Sisters to share work on the troubled animal

On Nov. 28, the Belfry in Sisters will be echoing with the sounds of elephants trumpeting and stamping their feet in greeting. Don Miller, a wondrous photographer and lecturer—and also an outstanding humanitarian—will be there to tell us about his travels around the world, his help for people with medical issues and his work with elephants on the Namibian desert.

Perhaps unbeknownst to Miller, his program actually had its beginning back in the '60s, during the "Sputnik Era," when science was hot in the schools worldwide. We crossed trails when he enrolled in the various science activities at the Oregon Museum of Science and Industry in Portland, where I was the staff naturalist. We've been good pals ever since.

Perhaps that's what opened the doors to science for Miller—trying to stay warm in winters at minus-30 below. But whatever did it, he has become a wonderful spokesperson for helping people in need due to medical issues, and the welfare of the largest living land mammal on Planet Earth, our treasured and troubled elephants.

An elephant's skin color is grey, and it's similar to the texture of linoleum. The largest recorded elephant was shot in Angola in 1974. It weighed 27,060 pounds (13.5 tons) and stood 13 feet 8 inches tall. And that, dear reader, is the most horrifying thing elephants face today: being shot for sport, mainly for their ivory tusks.

At birth, an elephant calf will weigh around 225 pounds, watched over by every female in its close-knit family. The gestation period lasts around 20 to 22 months, longer than any other land animal. 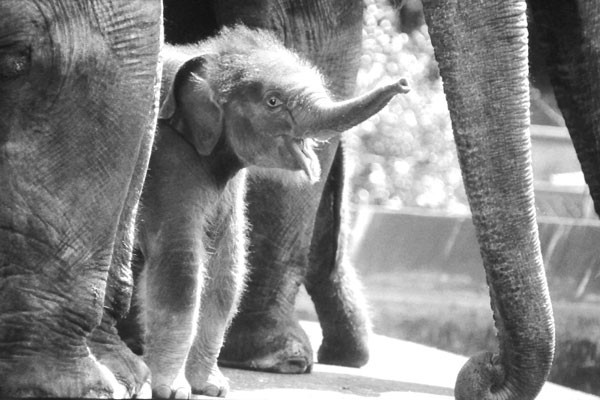 In the wild, elephants have strong family relationships, and their ways of interacting with each other have been difficult for people to understand. We know they "talk" to each other with sounds so low humans cannot hear them. Miller will share what scientists have learned regarding other methods elephants use to communicate.

Miller's a humanitarian and conservation photographer with a passion for enhancing appreciation of our biosphere, and awareness of the challenges facing our planet. He's titled his program, "Pachyderm Intrigue & Elephant Lessons." The presentation explores the sophisticated nature of elephant society and communication as illustrated by the research of biologists, Katy Payne and Caitlin O'Connell, and enhanced by the volunteer desert elephant conservation work Miller has done with the nonprofit: Elephant Human Relations Aide in Namibia.

Also trained as a registered nurse, Miller has done volunteer medical work in El Salvador, Haiti and China. He finds his travels contribute to the creation of his humanitarian images. "Invisible Gift" is the title of his recently completed print display, featuring images expressing goodwill—that non-material, seemingly invisible gift shared among people of the world.

Don Miller gained a special interest in elephants after first photographing them in 1983 at the Washington Park Zoo (now Oregon Zoo) in Portland. He will present his lecture under the auspices of The Friends of the Sisters Library and the Sisters Science Club's "Frontiers in Science" series.