On Oregon's coast? Take a look in the sand. 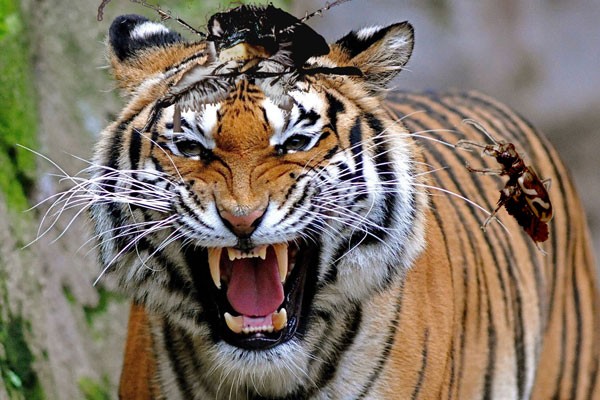 One of fastest and most aggressive beetles crawling, running and chasing other invertebrates on the surface of our planet can be found on the Oregon Coast: the tiger beetle. While tigers have hunting methods similar to tiger beetles, they're not normally found on the Oregon coast, or North America for that matter — thankfully, I might add.

Tigers, the big ones, once ranged widely across eastern Eurasia, from the Black Sea to the Indian Ocean and from Kolyma to Sumatra. However, over the past 100 years, they've lost 93 percent of their historic range, and have been extirpated from western and eastern Asia.

They range today from the Siberian taiga to open grasslands and tropical mangrove swamps. Major reasons for population decline include habitat destruction and fragmentation, and trophy-hunting by poachers. As a result, the remaining six tiger subspecies have been classified as endangered by the International Union for Conservation of Nature.

With apologies to my good pal, great artist and musician—and this week's cover artist—Dennis McGregor, I stuck my face-on photo of an adult tiger beetle on the head of the real tiger, and another crawling up its body, like he likes to do.

Tiger beetles and tigers are similar in appearance, and hunt for prey in the same manner. I doubt very much, however, if you'd ever find a tiger beetle sitting on a tiger's head in real life, but because of McGregor's influence on my imagination, I put it there—so we'll just have to blame him.

Be that as it may, while tigers are mammals, born into the world just like you and me, a tiger beetle begins life as an external egg, hatches into a larva, then proceeds to a pupa, then, after the miracle of metamorphosis, emerges as an adult. 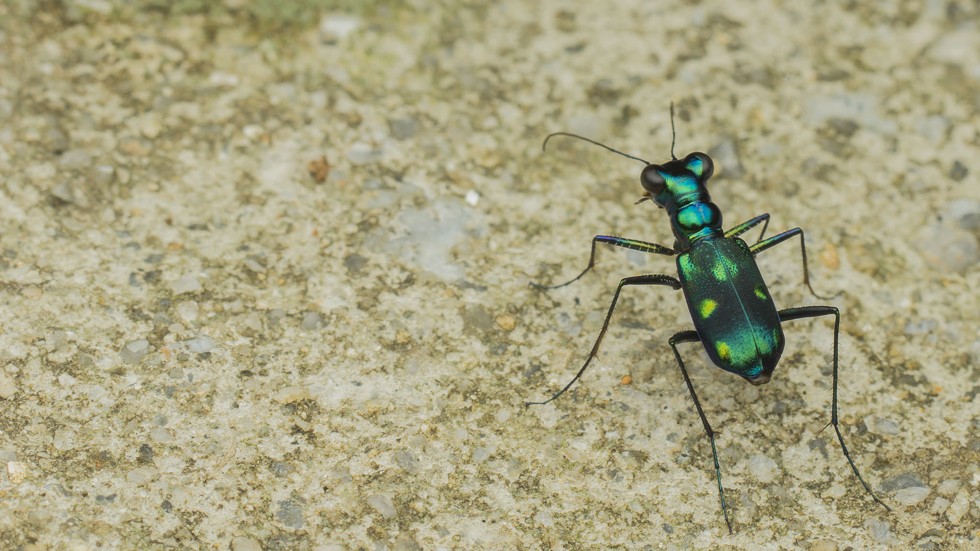 In the very early stage of life, mammals live and grow in a placenta—utilizing the nutrients in the mother's blood. The tiger beetle, on the other hand, grows and develops while it's in the larval stage, and even then, it's a supreme killer of other, smaller invertebrates.

They display an uncommon method of pursuing their prey, in that they alternatively dash quickly toward their victim, then stop, then dash after it again. This may be because while making those sudden sprints, the beetle's moving too fast for its visual system to accurately process in real time. Maybe it's like me as I get older, having to stop and say to myself, "Now, where was I headed...?"

Tiger beetles have another trait that may also be associated with their speedy, sprint-stop-sprint-stop method of pursuit. To avoid running into things, they hold their long, rigid antennae directly in front of them to mechanically sense what's coming, head-on.

In 1996, scientists in the Netherlands tested two species of Australian tiger beetle, (Cicindelseburmeola and C.hudsoni). Both have "vestigial" wings. Therefore, they cannot fly, but make up for it with running skills. They were clocked at 5.6 mph, capable of covering 8 feet in one second, which provides them with a speed their visual system probably cannot keep up with.

Tiger beetles have large bulging eyes, which gives them acute, wide-angle vision. Their long, slender legs and powerful muscles in the thorax provide them with their unusual speed. They also possess large, curved mandibles with which they grasp and crush their prey. (Sounds like the canines of a tiger, doesn't it?)

Tiger beetles, worldwide, are hot-to-trot predators, both as adults and as larvae. While most species are diurnal (day-moving), four genera are nocturnal, and most tiger beetles are brightly colored, while a few genera found living primarily in the dry regions of southern Africa are all black.

While there are many instances of adult tiger beetles glomming onto human appendages, there are no records of the larvae of tiger beetles attacking humans. The larvae live in cylindrical burrows as much as 3 feet deep,and are large-headed grubs with a muscular humpback, which they use to flip backwards to capture insects that wander over the surface nearby.

In researching these colorful, predatory beetles I discovered they are also—like tigers of Asia—considered a good indicator species, and have been used in ecological studies on biodiversity health. That is, if they are found in their normal numbers in habitat where they were once found, it would suggest the habitat for all species in that niche are in good condition.

As an example, several species of wingless parasitic wasps lay their eggs on larvae of various tiger beetles, which would indicate the ecosystem is operating well. In the same way we find paper wasps capturing Monarch butterfly larvae and returning to their nest with them to feed their young in the rearing cells. The more interacting activity there is within an ecoregion the healthier it is.

The next time you head for North Bend or Coos Bay for a day on the beach, take a look in the sand dunes among the grasses and other vegetation and you'll (hopefully) meet up with Oregon's tiger beetles. If you don't, please call me and we'll find out why. And if you go tiger-viewing, please be careful, and hurry home; I'd love to see your pictures!