The eagles are baaaaack! 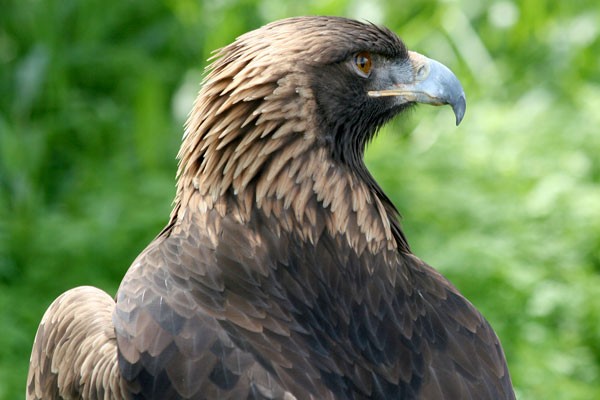 In the entire U.S. of A. there's only one Golden Eagle nest being monitored by webcam at this time, and it's right here in Sisters Country. And thanks to the East Cascades Audubon Society, which is paying to have the images streamed around the world, landowner Leslie Lawrence, who watches over the camera equipment, and Sisters Astronomy Club technician Jim Hammond, who keeps the equipment going, all you have to do is wiggle your mouse, go to goldeneaglecam.com and watch the live image. You'll see a very regal, noble-looking adult female Golden Eagle very quietly—and in a queen's pose she so easily occupies—incubating one or two eggs that, if all goes well, will hatch in about 35 to 40 days.

If you're watching when the eggs hatch, you'll witness just how tender a momma Golden Eagle can be. As soon as she hears (feels?) the young eagle starting to crack the shell that begins the process of hatching, she carefully rises, steps to the side of the nest and watches the process very intently...and now you can do the same sitting in your home.

If it hadn't been for the dedication of Janet Zuelke and her sidekick, Forrest Babcock, committed to the safety of the eagles that built a nest on the cliff overlooking Whychus Creek, none of what we are enjoying today would have been possible. In fact, Zuelke took personal ownership of that nest. From the time the female laid her first egg, Zuelke was on pins and needles, worrying about the welfare of the nestlings and parents.


I thought I was going to lose Zuelke; her tears, suffering and anxiety were so sad to witness. tweet this

One year a youngster was blown out of the nest in a powerful windstorm, and really, I worried abut Zuelke's health and welfare. That dear woman was beside herself as she watched helplessly the attempts of the alarmed female eagle trying to coax the baby back into the nest by offering it food. I had the honor to be with Zuelke as she went though the pain and sorrow of that event.

She wanted me to go over there and place the baby back into the nest, but that wasn't in the "rules." If the youngster had been blown out because of human causes I guess it would have been legal to butt in. But this was all in Mother Nature's bailiwick; we humans had nothing to do with it. Unfortunately, the baby wasn't any more than a few days old when the windstorm blew it out and tumbled it down into the outer parts of the nest. Again and again mom offered the tiny nestling food to entice it back into the nest, but time and time again the weak and helpless chick fell back exhausted, until finally the wind sapped away all the warmth and strength of the nestling and it died.

I thought I was going to lose Zuelke; her tears, suffering and anxiety were so sad to witness. If there had been two nestlings perhaps it wouldn't have been so hard on her, but in time she healed and accepted the unfortunate incident as part of what is actually fairly normal and regular in Nature.

The female kept coming back each spring, each time making the nest bigger, stronger and safer for her little ones. And each time she came back, Zuelke and Babcock said, "What if we had a camera..." Then one spring day the light came on. Babcock had the answer and the beginning of what we see today began to happen.

A tent, staked to the ground was protecting the camera system back in 2011—crude, shaky and far from weatherproof. But anyone who knew and worked with Babcock also knew he was good at solving challenges, and his first gazebo solved the problem of stability and weather protection. As an optical engineer, applying his skills to challenges was right up his alley. What a thrill it was the first time the two called me to come out and see the first images of the eagles on the TV in their living room.

From that day on, the images became more steady, better focused and more reliable, and the crowning glory came when Babcock, all by himself, poured a concrete pedestal in his beautifully built gazebo to support the camera. From that day to this, the images streaming out of the optical and electronic equipment now housed in their beautiful old gazebo are rock-solid and are being viewed around the world.

I'm sure many people held their breath when Zuelke and Babcock sold out and left Sisters Country, but Leslie Lawrence, the wonderful lady who purchased the place, took to the eagle cam like a duck to water.

Gary Miller and the Sisters Photography Club jumped right in to keep the cam up and running, and Lawrence herself plunked down the money needed to keep the streaming going. But it was Kevin Smith of East Cascades Audubon Society who took over all the financial needs, and Jim Hammond of the Sisters Astronomy Club who not only solved all the mechanical and optical issues, but is still mothering it today.

It's free to watch, but costly to keep going. Jim has to keep tuning it up, as it's sitting right out there in weather, even under the shelter of the original gazebo. It also costs money to pay the streaming costs, and the equipment isn't free, either. If you'd like to help defray the costs, you can make a donation right on the Golden Eagle webpage, goldeneaglecam.com.

As you watch life unfurl for the young eagles in the nest, give a thought to how well the love of nature works when combined with a lot of people cooperating and working together for the good of all, and what that will mean in the years to come.