The arrival of a new trumpeter swan in Sisters 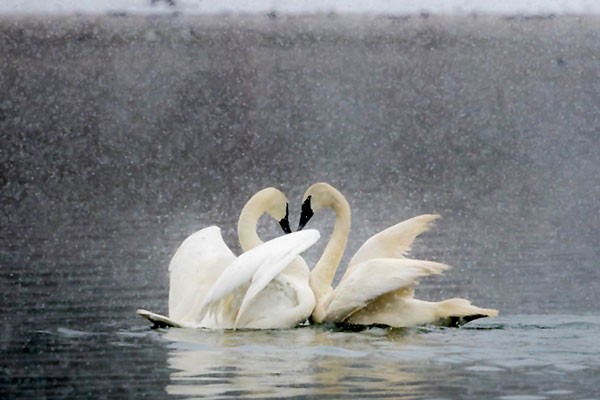 Aspen Lakes, on the Cyrus family property near Sisters, is involved in an exciting wildlife project. The project is in cooperation with the Trumpeter Swan Society, Oregon Department of Fish and Wildlife, U.S. Fish and Wildlife Service and the benevolent people at Aspen Lakes.

There are only three trumpeter swans in the breeding program in the state of Oregon, and of the these, only Eloise now has a mate. Other swans include the Sunriver female—whose mate was recently shot and killed, and a lone female on the Deschutes River in Bend. Aspen Lakes resident Robin Gold says, "Since swans are typically sold in pairs, we were extremely fortunate to find an unpaired male for Eloise."

Eloise, purchased with three other swans by the Cyrus family several years ago, has been joined by Pete, a newly-acquired young male trumpeter. Gold and the other residents of Aspen Lakes collected enough funds to purchase Pete, and the pair will—hopefully—become part of the trumpeter swan recovery program.

According to Gold and the Cyrus family, the success of the program will result in a vital contribution to the growth of the species throughout the bird's range. Plus, Aspen Lakes residents and visitors can enjoy observing the adult swans and offspring. The adults' wings are clipped so they're permanent residents, but the offspring will not have their wings clipped, so they can eventually be released to the wild.


Swans need to swim nearly constantly to reduce pressure on bones, joints and vital organs, since they are such large birds. tweet this

The Cyrus family purchased two pairs of swans at separate times when the Aspen Lakes Community was originally developed. Unfortunately, three of the four swans are now deceased, and the surviving swan, the Cyrus's beloved Eloise, is estimated to be in her late teens. The Cyrus family has graciously allowed the use of the large pond to be the nesting site and have allowed Eloise to be a part of the program.

Pete was successfully released into the pond on a recent Friday morning, where he and Eloise seem to have hit it off. They may have offspring this year, but it will more likely be next year before everyone can hope/expect to see a family of swans.

Trumpeter swans are the largest waterfowl species in North America, with a wingspan of 7 feet and standing about 4 feet tall. Most trumpeters weigh in at about 21 to 30 pounds, with the males tending to be the larger. The male is called a cob, the female is a pen and the babies are cygnets. They may live 20 to 30 years in the wild.

Hunting for meat, skins and feathers reduced the once-widespread trumpeter swan population to 69 known individuals in 1935. Hunting them is now illegal throughout the United States. Trumpeters have rebounded and their numbers are increasing. However, they're still officially a fragile species, classified as a Conservation Strategy Species, a Sensitive Species and a Protected Wildlife Species in Oregon.

Continued threats to the species include habitat loss, lead poisoning, striking power lines and the occasional shooting, such as the shooting of the Sunriver male and the killing of trumpeters last year in the ODFW's Summer Lake Wildlife Management Area. The swans are also extremely sensitive to human disturbance at their breeding sites and may abandon nests and cygnets if disturbed.

In addition to the Cyrus family, the Sisters program will be overseen by Gary Ivey, a wildlife biologist and past president of the Trumpeter Swan Society, and Simon Wray, conservation biologist with the Oregon Department of Fish and Wildlife. Cygnets will remain with their parents for 10 to 11 weeks and then be transported to Summer Lake Wildlife Area for release to the wild.

Swans need to swim nearly constantly to reduce pressure on bones, joints and vital organs, since they are such large birds. The Sisters group has purchased and installed a bubbler in the north end of their pond to ensure there is an ice-free area all winter.

Wild flighted swans are quite capable of caring for themselves, however, Pete and Eloise are pinioned (the wrists of their wings surgically removed). They're unable to get to other food sources if the natural supply is reduced in the pond, therefore they are supplemented year-round. The swan feeder is designed to let the swans self-feed on demand, but doesn't give visiting geese and ducks access to supplemental food. Also, the automatic feeder reduces the association of food with humans for the swans.

In order to achieve optimal results, the trumpeter swan recovery program relies heavily on the cooperation of neighborhood residents and visitors. Both Gold and the Cyrus family urge visitors to follow these guidelines:

The swans are not pets. Please do not attempt to befriend them to become human companions. To enhance their chance for survival, it's particularly important to keep any cygnets as wild as possible.

Do not feed the swans, ever. They'll be on a specially formulated diet and fed through an automatic feeder to prevent association with humans for food. Do not let dogs near the pond. The swans (adult and juvenile) have an acute fear of coyotes to ensure survival. Your pet dog may not be a threat to the swans, but it may look well like a coyote to a swan.

When asked how they think things will go, Connie Cyrus gives a big smile and says, "We are looking forward to partnering with the Trumpeter Swan Society, and hopefully, we will have some cygnets swimming around the pond soon."