The beetle with headlights 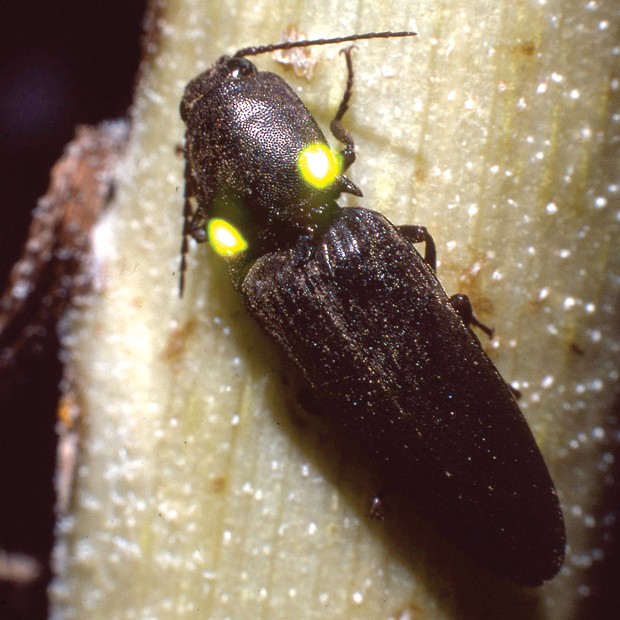 It was a young and eager naturalist in Sierra Vista, Ariz., Leonard Taylor, who brought this bioluminescent click beetle into my life, on a night I'll never forget.

My wife, Sue and I were running Ramsey Canyon Preserve, just outside of Sierra Vista, Ariz. in the late '70s and early '80s. Ramsey, in those glorious days, was known as The Hummingbird Capital of the U.S., and for a good reason. People from all over the world came there to glory in the hummers.

The more serious birders—those who kept a Life List of the birds they knew—came there ostensibly to see a particular hummingbird, the Berylline, along with the ho-hum, beautiful blue-throated, gorgeous Magnificent (now known as a Rivoli's hummingbird), and 13 others. The Berylline was known to nest in only two locations in Arizona: Ramsey and the Southwest Research Station.

No one ever mentioned a lighted click beetle, and what a shame so many visitors missed it. But I'll tell ya, no one missed it after Taylor showed it to me.

His phone call came just as I as sitting down to a bowl of vanilla bean ice cream. Now, there's not very much that will get me to leave a bowl of vanilla bean ice cream—especially Umpqua Vanilla Bean Ice Cream, but it wasn't Umpqua's that Taylor interrupted. I couldn't have turned him down anyway; the excitement in his voice as he described what he was looking at would have gotten me off my death bed.

"Jim!" he shouted. "You won't believe what's on my rose bushes! It looks like a click beetle with two glowing eyes on its thorax!" That did it. I dropped my spoon, grabbed up my camera, jumped in my old VW camper and headed down the road to Taylor's house, just below the preserve.

As I stepped out the VW, Taylor grabbed my arm and led me right to the beautiful beetle with its glowing thorax. And you know? I think that was the beginning of something for Taylor, too, He went on to introduce people to the beautiful Huachuca Mountains towering behind his home by writing a beautiful hiking guide to southeast Arizona that includes maps for Bisbee, Benson, Sierra Vista, Tombstone, Fort Huachuca, Ramsey Canyon, San Pedro River, Kartcher Caverns, Dragoon Mountains, the Huachuca Mountains and more.

As we stood, almost reverently, watching the beetle, we discovered it didn't just have bioluminescence going for it. Like other click beetles, it also could produce sound, go into an instant clicking leap of about 8 inches, and had wings with which to fly. What a beetle. What a sensational insect!

"As far as the eye reached, the crest of every wave was bright, and the sky above the horizon, from the reflected glare of these livid flames, was not so utterly obscure, as over the rest of the heavens." —Charles Darwin tweet this

No, you can not call it a "bug!" A "bug" is another special insect, but not a beetle. Bugs and beetles are the apples and oranges of the insect world. If you want to see a bug-that-is-a-bug, wait til you come into contact with the giant water bug that lives in the depths of Suttle Lake. Now, that's a bug!

And then there's that beetle that lights up on its own. How and why insects got into the light production business is beyond me. Our old pal Charles Darwin mentions bioluminescence not in land organisms, but in the sea while on his voyage on the boat, the HMS Beagle:

"While sailing in these latitudes on one very dark night, the sea presented a wonderful and most beautiful spectacle. There was a fresh breeze, and every part of the surface, which during the day is seen as foam, now glowed with a pale light. The vessel drove before her bows two billows of liquid phosphorus, and in her wake she was followed by a milky train. As far as the eye reached, the crest of every wave was bright, and the sky above the horizon, from the reflected glare of these livid flames, was not so utterly obscure, as over the rest of the heavens."

I had a similar experience back in the late '40s while in the Navy serving on the minesweeper, USS PCS 1384, patrolling the Straits of Florida for Russian submarines. My job was to keep the machinery running on that sweet little vessel, and one night while getting off watch in the engine room, I came out on deck on a night filled with stars. The sea was calm, so I went over and leaned on the gunwale to enjoy the night sky. As I put my weight on my forearms I began to notice a glow in the sea. Suddenly, a submarine surfaced about 50 yards off the port side.

I stood there transfixed, watching the glowing sea swishing about as the conning tower of a submarine split the sea around it. Then a hatch popped open and a man pinned me in a powerful light, shouted in a language I couldn't understand, gave a big laugh, dropped the hatch and the sub disappeared beneath the waves, stirring the glowing sea as she went down.

In the words of Wikipedia: Bioluminescence is the production and emission of light by a living organism, a form of chemiluminescence. Bioluminescence occurs widely in marine life, as well as in some fungi, microorganisms including some bioluminescent bacteria and terrestrial invertebrates such as fireflies. In some animals, the light is bacteriogenic, produced by symbiotic organisms such as Vibro bacteria; in others, it is autogenic, produced by the animals themselves.

As far as I know, there are no lighted click beetles or fireflies in the Sisters Country, or anywhere else in Oregon for that matter, but there may be some kind of animal or fungi that lights up, so, if you have the time and the kids to lead you out of the house to look for glowing animals, please take the time to do so. I've never seen a glow worm, firefly, lighted click beetle or any insect glowing in the dark here, but that doesn't mean there aren't any.

If you discover something glowing in the dark, please, please send me an email! jimaturalist@gmail.com.