A Cleanup at Arnold Ice Cave 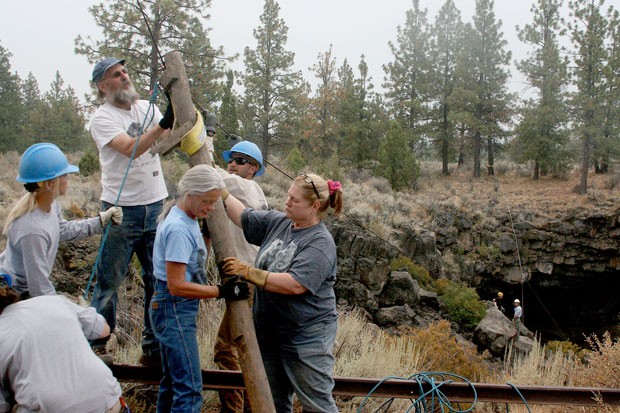 This month, Arnold Ice Cave—located about 12 miles down China Hat Road from Bend—was the site of a whole bunch of good people helping to remove the old, defunct stairway in the cave. The stairway was installed by the U.S. Forest Service in 1963 to provide safe access to the floor of the cave. Mother Nature didn't like that ugly thing in the cave, and buried it in ice shortly after.

Back around 1958, this writer and his cave partner, Phil Coyner, were (or so we thought) the first humans to go into the ice-choked area of the cave—an exciting slide down a huge, round wall of ice. When we got to the ice floor of the cave we could see into the rear portion, but the ice floor was too close to the lava ceiling for us to get through. Phil chopped a ditch in the ice large enough for us to slide through, which gave us access to the cave extension.

We walked on ice all the way to what we presumed to be the end of the cave. Ice embedded in the walls of the lava tube winked and reflected the gas lights we wore on our hard hats, but we saw no sign of bats, other cave visitors or cave life.

Had we explored more carefully we would have found ice crickets—which we discovered in South Ice Cave a few months later. Just recently, because of a lack of ice, cavers of the Oregon High Desert Grotto explored into the cave's extension and walked on the lava floor, instead of ice. 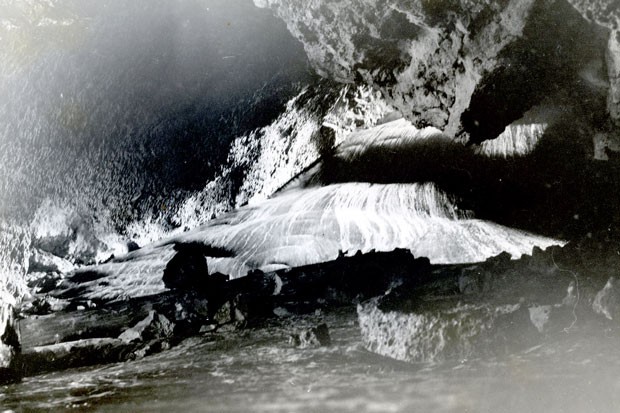 Eddy Cartaya discovered a group of small lava rocks arranged like a box on the floor of the cave. When he carefully moved the rocks, he discovered a small glass jar, and inside the jar, slips of paper with names of cavers who visited that spot in 1920.

Arnold Ice Cave has an illustrious history. Some 80- to 100,000 years ago the area southeast of Bend was a fiery maelstrom of pahoehoe lava flowing across the landscape like boiling hot, muddy water. One of the local lava cones, Lava Top, is so named because it's surrounded by an aa aa lava flow—the source of most of the pahoehoe lava that created the Arnold Ice Cave.

(Pahoehoe and aa aa are two Hawaiian terms to describe types of lava that flow from volcanoes.)

Over time, Arnold filled with ice. When the ancient residents of Oregon began to settle in and call the land home, it yielded water. Archeologists have found evidence that some 10,000 years ago, people released water from the ice by thawing it with burning pine logs.

Later, early pioneers who settled into Central Oregon—especially those who made money cutting timber—found keeping their food from rotting in summer a big problem. That's when Arnold Ice Cave and others of its ilk proved dandy for starting an icebox business.

One early saloon owner thought he could corner the ice business by making his own road to Arnold Ice Cave, keeping others from using it. But the competition over who would be "boss" didn't stop the people who wanted the ice from building a rough road from Bend to Arnold Ice Cave—eventually taken by the railroad that transported logs to the Brooks-Scanlon mill.

This month's great turnout to do a cleanup of Arnold Ice Cave didn't yield any more historic tools from the Bend Ice Age, but it did provide a great many wonderful workers from several local agencies the opportunity to clean up—and have a lot of fun doing it.

It was wonderful to see the efforts all the volunteers and USFS employees went to to make the Arnold cleanup a success. Eddy Cartaya, an outstanding member of the OHDG, rigged ropes and cables that made removing the debris from the ice cave somewhat easier.

"It was a smoky morning at Arnold Ice Cave," said Ginger Sanders, longtime member of the OHDG.

"There's excitement in the air as the long, long line that snakes up from inside the cave all the way over the breakdown piles and up the steep hill, starts to vibrate and sing. Everyone up top grabs the lines and starts hauling up old wood in a massive combined effort. As it sees the light of day, it smells like a lava cave. 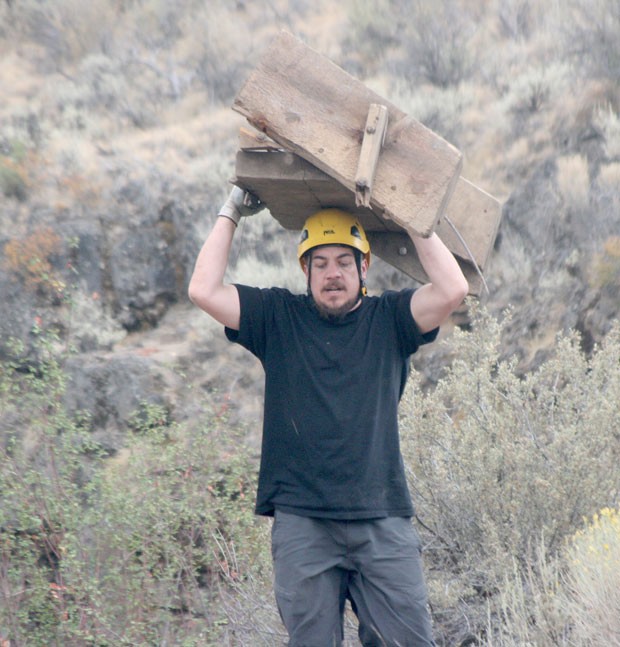 "Some of us pick out random bits to make something cool for ourselves, so it won't just go to the dump and be forgotten. It means something to us. Each cave holds our own personal stories, the stories of our children, our friends. This one, in particular, holds special history of our town," Sanders says.

"At the end of the day, the cave is rid of its large pile of old wood and wire. It seems to breathe a sigh of happiness. So do we. It's an honor to be a part of this day. And my car, filled with very dirty old wood, smells like the cave. How can I save this smell forever?"