The Beaver That's Not 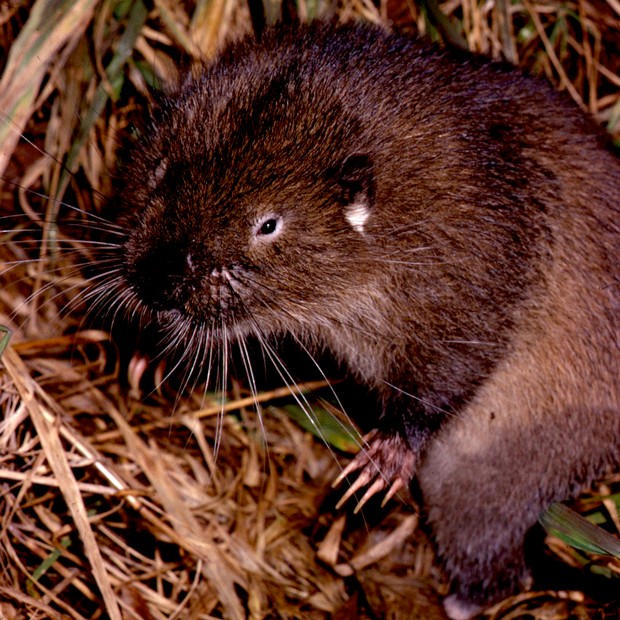 So there we were, a full busload of 6th graders touring with the Oregon Museum of Science and Industry, pounding on fossil-laden rocks in a quarry just outside the sleepy logging town of Vernonia, west of Portland.

The year was 1965 and school was out. I was the staff naturalist (and bus driver), and with the help of my boss, Vice President of Education Ray Barrett, we came up with a whole passel of outdoor programs for kids from 1st grade to high school seniors. The activities were meant to help kids learn natural history sciences, and fossil digging was just one part of the curriculum.

For most of the 6th graders, the original plan of digging for fossils in the Vernonia quarry was enough—but as every parent and teacher knows, there are one or two kids who prefer to explore on their own, and that was how I met my first mountain beaver.

One of the kids who went out with us regularly was always exploring, and this time was no exception; he vanished within the first 10 minutes of our arrival at the quarry. I left my parent helpers with the fossil-diggers and (thanks to the ever-abundant mud) followed the kid's tracks into the surrounding fossil-laden hills. When I caught up with him he was looking right at me, finger over his lips in the "shhhhhh, quiet" sign.

I honored his communication, because not long into the naturalist business at OMSI, I learned that kids are experts at discovering new things. As I approached, he turned and began pointing at something not far off. When I reached him, he put his hand on my shoulder and turned me so I could see what he was pointing at.

What he had discovered, and I quickly photographed, was a mountain beaver. To be more exact —as there are several species — this one was Aplodontia rufa.


But beware, they're known to be the host to the world's largest flea, and who knows what would happen if you got bit by one. This monstrous flea can reach a half-inch in length, with a head the size of the normal cat/dog flea. tweet this

I had no idea what or who we were looking at. It was new to me and what I knew of the wildlife of The Swamp, aka Willamette Valley. I whispered back, "I don't know, let's watch it for a bit," and we did, for way too long. Suddenly, back in the quarry, an anxious voice was shouting my name, "Mr. Anderson! Did you find him?!" I looked at my new pal, he looked at me, and we both said, "Uh, oh."

As far as I know, that was the first and last time either of us had the privilege of seeing a mountain beaver in the wild. But the people of Gig Harbor, Wash., can tell you all about them. They not only have Bigfoot wandering around, but mountain beavers are as common as feral cats and mule deer in Central Oregon. If you think you have trouble with the infernal deer getting into your garden, you should live in Gig Harbor and put up with mountain beavers.

But let me tell you more about that little troublemaker. To begin with, they're endemic to only the Pacific Northwest, with a spotty range in California and Nevada. They're probably the most primitive mammal in this neck of the woods.

It's the ONLY living member of the genus Aplodontia in the world. In fact, it's not a "beaver" at all. The beaver so common around our lakes, river and steams is in the genus Castor, a water-loving rodent that's something very different.

The mountain beaver goes back to when the dinosaurs were eliminated from the earth and mammals began to take over their habitat. Their skull is like no other mammal of today; it's flattened and lacks the processes to hold muscles in that area, like today's mammals and like true beavers, and you and me.

If you're in a big rush to head out and photograph one, good luck! Gig Harbor would obviously be the first place to go, but the Oregon Coast Range around Vernonia would also work. They live in the ground and hide the entrance to their burrows with sticks, brush and grass. So good luck again.

But beware, they're known to be the host to the world's largest flea, and who knows what would happen if you got bit by one. This monstrous flea can reach a half-inch in length, with a head the size of the normal cat/dog flea. It was first discovered on a Washington mountain beaver, and as far as I know that's the first and only time they've been seen.

If you find a Mountain Beaver and it happens to have one of those fleas on it, PLEASE invite me to join you! jimnaturalist@gmail.com.