"The Lighthouse" illuminates our dark corners

So, if "The Joker" is about a mentally ill man's descent into madness, then Robert Eggers' nightmarish "The Lighthouse" is about everyone's capacity for insanity and violence if society and civilization are just out of reach. This is one of those movies with a deceptively simple premise that touches on themes and ideas so massive that the film ends up being pretty profound in retrospect. 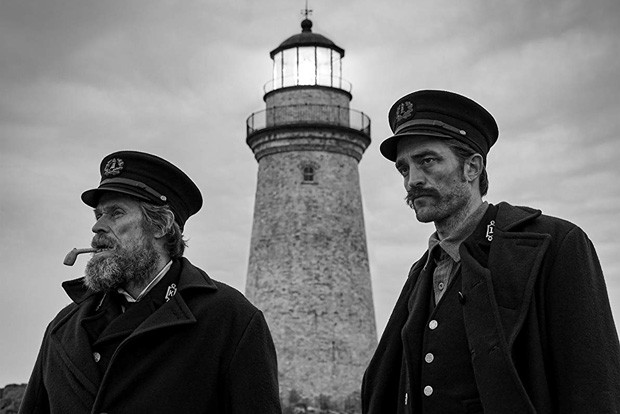 It's the late 19th Century and two men are on a boat headed toward a remote and isolated island to be lighthouse keepers (or "wickies"). Willem Dafoe is Thomas Wake, a drunken and flatulent lighthouse veteran, and Robert Pattinson is Ephriam Winslow, a young man trying lighthouse keeping for the first time, hoping to build a stable life for himself by learning a new trade.

The two men, strangers, are doing a four-week shift at the lighthouse before being relieved by two other wickies. A month isolated from the outside world doesn't seem long at first, but when you add alcohol, back-breaking and repetitive labor and a secret or two, then four weeks can (and does) seem like a lifetime.

"The Lighthouse" is black and white, shot with a smaller aspect ratio so that their isolation is evident even in the framing. In the days of IMAX and bigger, louder, faster everything, it's haunting to see a film mostly comprised of contrasting shades of shadow that takes place in a small square at the center of a giant screen. The claustrophobia these characters feel is mirrored back at the audience, making us desperate for more space—or at least a few more feet of frame for the characters to exist across.

Shot on 35mm film, Eggars and cinematographer Jarin Blaschke make "The Lighthouse" feel like some lost German expressionist film from the 1920s that could be the love child of F.W. Murnau and Fritz Lang. Combined with a hypnotizing score by Mark Korven and two towering and unforgettable performances by Dafoe and Pattinson, "The Lighthouse" feels like a movie that has always existed...even if just in our subconscious.

Without getting into spoilers, this is a film that fills each and every frame with perfectly composed shots of beauty and horror, and each image unwraps the film's secret meanings and metaphors. Ancient sea gods are invoked, curses are laid upon the damned and madness becomes the sanest response to a landscape so harsh and forbidding.

This is not a crowd pleaser and is guaranteed to split audiences down the middle. People looking for something a little more mainstream will dismiss the film as weird (which it proudly is) without engaging with the existential dread walled up tight at its center.

"The Lighthouse" is a film that will haunt you like a ghost you know is right behind you, still deciding whether or not to hurt you. This is cinema without fear and without compromise. Do people still want that anymore?