Downtown Bend became a sea of red on May 8, as local families and Bend-La Pine Schools' staff members — all wearing red —rallied together in support of appropriate state funding for public education. Participants marched together in camaraderie to the downtown Bend-La Pine Schools' Education Center. The joyful rally of approximately 2,000 people included live music and chants such as "fully fund our schools." Families carried signs urging smaller class sizes and increased counseling and mental health supports for students. 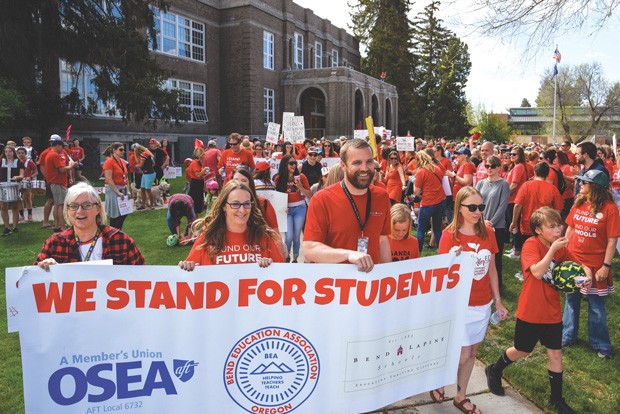 "Together, we created a mighty wave that will result in change to benefit generations to come. Keep raising your voices for education," said Shay Mikalson, Superintendent of Bend-La Pine Schools.

On May 13, the Oregon Senate passed House Bill 3427- the multibillion-dollar education funding plan. If Gov. Kate Brown signs the bill into law, it's estimated to bring in about $1 billion per year in additional revenue for schools from a new commercial activity tax on businesses with greater than $1 million in sales per year.

When the Cafeteria Gets Crazy Loud

Education is already innovative at the Redmond Early Learning Center, where the Redmond School District pools all of its in-town kindergarten classrooms into one building. RELC educates close to 400 kindergarten students, in addition to being the "one stop" shop for parents to access services for kids ranging in age from birth to age 6.


With that many little ones in one place, needless to say, the place can get pretty loud. In the cafeteria, about 100 "kinders" are eating lunch at the same time, according to RSD—and that means it can be difficult for staff members to communicate with kids.

Not long ago, however, a team of instructional aides remembered that speaking isn't the only way to communicate and proposed using sign language as a way to "talk" in the cafeteria. The team made a video and created posters that showed how to use important words such as ketchup, fork, spoon and water. It took the kids just one week to pick up the signs.

"While we originally came up with using sign language as a way to decrease the volume in the cafeteria, we quickly realized it also increased efficiency by allowing us to communicate across a crowded room," Instructional Assistant Gina Detweiler shared.

"It sounds a little funny, but until you've been in our cafeteria you don't realize how important it is to be able to sign "ketchup" from across the room," Detweiler said.

According to research from the Centers for Disease Control and Prevention, about one in nine women in the U.S. experiences postpartum depression following the birth of a child. In Oregon in 2015, about 12.8 percent of women reported having symptoms of postpartum depression, according to the CDC's Pregnancy Risk Assessment Monitoring System.


While health care providers have offered a variety of treatment options, a new drug is aimed at specifically treating postpartum depression. In March, the FDA approved the Zulresso (brexanolone) injection which should be available by late June.

Zulresso is not cheap, however, and its treatment protocol requires the new mother to stay in a health care facility for a few days to receive a continuous intravenous infusion. However, the treatment is touted to have a much faster effect than antidepressants. Some women reported feeling better within 48 hours—but according to an article in The New York Times, the drug costs around $34,000 per patient, before discounts.