Nevada Beer Gets a Revision

A young brewery with a king-sized rep 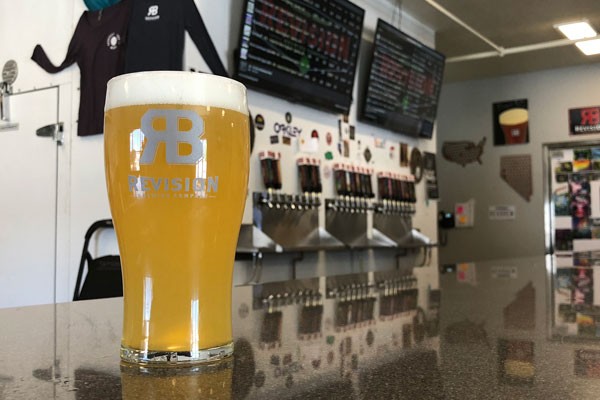 Walking into Revision Brewing Company's production facility in Sparks, Nev. (adjacent to Reno), one would think the place has been around for years. A roomy bar and tasting room facility opens up to an even larger warehouse area, complete with a gigantic graffiti-style mural and rows of neatly-lined steel fermenters. A dozen or so beers are on tap, many available for take-home sale in bottles, cans or growlers. Much of their stuff is widely available in Bend's bars and shops, too.

But this is no old hand in the northern Nevada brew scene. In fact, Revision is celebrating its one-year anniversary just this weekend.

Of course, the story is older than that. Revision was founded by Jeremy Warren, who first made a name for himself by establishing Knee Deep Brewing in central California. Known for super-bitter IPAs including Hoptologist and Breaking Bud (a name that attracted a lawsuit from "Breaking Bad" rightsholders, Sony, last month), Knee Deep's been popular with hopheads across the West for years. Warren left the brewery in 2015 in order to focus his creative talents elsewhere.

Revision is the result, and given Warren's past experience, it's perhaps unsurprising that his team's hitting it out of the park in such a short time. The standard Revision IPA and Double IPA (widely available in bottles across the Northwest) recall Knee Deep's best—but stop on by their brewery for a chance at their more experimental stuff, including what feels like several zillion Northeast-style pale ales. Planetary Fog, in particular, is pretty epic—a "big bang" of Amarillo, Mosaic, Citra and Galaxy hops, smashed together into a nice, hazy package.

Like a lot of other regional cities across the U.S., the Reno area has seen a torrent of breweries open in the past three years or so. One of them is Portland's own Occidental Brewing, bringing its world-class lagers to a new barroom space inside a casino down the street from Revision in Sparks. German styles are their trade, and in Nevada, they pair it with mouth-watering German food. Try the currywurst for that authentic Berlin train-station bar experience.

And speaking of trains, no brew-oriented visit to Reno would be complete without visiting The Depot Craft Brewery and Distillery. Housed in a three-story brick building that was once the Nevada-California-Oregon Railway headquarters, The Depot offers a wide range of ales and spirits, paired with an excellent dining program. It's in downtown Reno, near the main casino neighborhood. Two doors down from it is Lead Dog Brewing, another new guy with an amazingly large selection of high-quality NEIPAs.