Say "bye" to pot brownies and "high" to potcorn

According to a poll taken by comparecamp.com in 2019, 9.6% of cannabis users in the U.S. preferred to ingest marijuana via edibles like brownies, cookies or gummies. As weed grows in popularity, it seems more and more non-smoking stoners want to feel the effects of THC and CBD without inhaling. The most convenient way for these types of potheads to get baked is by ingesting marijuana. Being fresh to the dope game here in Central Oregon I decided to dive into the world of edible marijuana and try a few of the more off-the-wall ways to ingest weed.

The most chill way in my opinion to consume cannabis is via a can of soda, or bottle of juice. Depending on which part of the nation you are from, "pot pop" has a really nice ring to it. Dispensaries around Bend hold several styles of beverages that stoners can get their hands on. A recent personal favorite of mine is the caffeine-free colas from Magic Number, available at dispensaries including Oregrown, where I picked it up. The soda literally tastes of Coke, or RC Cola and doesn't have the jittery vibes that comes along with the regular versions. Instead, the fizzy drink leads you down a calm and energizing path that keeps your mind and body high. It is great for sipping on a hike or pregaming for a night out on the town. Magic Number has other flavors such as Ginger Beer, Mandarin Lime and Cherry Vanilla. Magic Number infuses all its beverages with single-strain live resins that make for a stony sipping session each and every time.

Another wacky edible I tried was a sort of cheese crisp from the Laurie + Mary Jane marijuana company. The crisp itself definitely has an acquired taste and if you're not ready for a mouthful of bud get prepared quickly. I was initially expecting a chip-like crunch but was met with a thick and brittle orange puck that only slightly smelled of cheese. Though it's not the best- tasting edible the high it brings defines "couch" or "bed locked" and would be perfect for movie night or helping you get to bed. This product can be found at several dispensaries around Oregon including Dr. Jolly's in Bend. 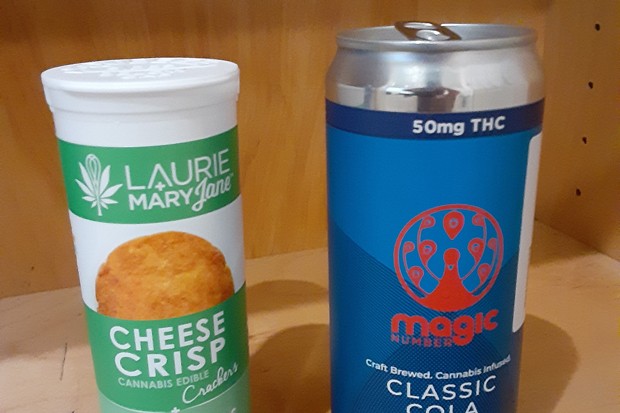 Drinking a soda or eating some cheese crisps is about as discreet as you can get while consuming cannabis. That is until you add pop, or potcorn to the mix. Mellow Vibes White Cheddar Potcorn is what I would consider nirvana in a bag. This cannabis product displays no hints of the substance at all—not in the taste, feel or look of the popcorn in the slightest. Walking around with a bag of this popcorn would be great for a Christmas party or a night in front of the tube.

Mellow Vibes Potcorn can be located at multiple dispensaries in Oregon.

Ingesting marijuana through food and beverages has definitely advanced in the mainstream world of cannabis users. Butter, oil and other sorts of infusions are allowing chefs and amateur cooks to experiment with marijuana extracts and terpenes in ways past stoners never even considered. As I type, there's most likely a company coming up with another ingenious way to consume THC like a pop-tart pot-tart, or infused spaghetti sauce. Either way, the world could definitely use more weed-inspired dishes.