New Album for a Classic Band

Now that live music is back, with it comes a string of Cheap Trick concerts. It's something the veteran act has been doing on a consistent annual basis ever since forming in Rockford, Illinois, in 1973. The year-and-a-half in which touring came to a standstill didn't mean founding member Rick Nielsen sat back twiddling his thumbs. An ever-restless sort, Nielsen found plenty to do in trying to avoid being idle. 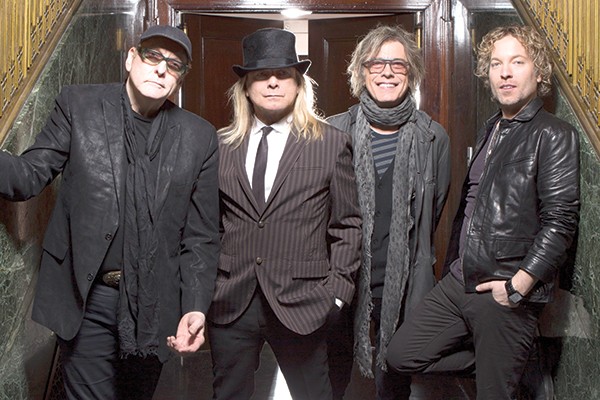 "I've never been home that much ever," he said with a laugh during a recent phone interview. "It wasn't inspiring, but it was interesting. Everybody was in the same boat—me the same as you and the next guy. I have other things I do—organizing things, working on my guitar collection—stuff I can't do from the road so well. I try to create jobs for other people and that's what I did. There's a spirits business that I've been involved in. I worked on two pilots for TV—just lots of stuff. I can't hold it in my hand here and show you."

One of those things the Rock and Roll Hall of Famer can show fans is "In Another World," Cheap Trick's 20th studio outing. While its official release date was April 2021, a couple of singles were leaked out dating back to 2018 including the opening cut "The Summer Looks Good On You," a gem chock full of layered harmonies and irresistible guitar riffs that stoke images of the beach, warm weather and carefree vibes.

It's the kind of seasonal earworm that would have been all over radio in an earlier age. Instead, it's been lost in a morass of hip-hop-dominated radio playlists and ignored by classic rock stations more content with playing the live version of "I Want You To Want Me" for the millionth time versus letting the public know Cheap Trick has a new album.

Other highlights include "Here's Looking At You," a co-write with hit songwriter Linda Perry that finds both artists digging into a deep power-pop vein erupting with an urgent torrent of melodic hooks. Elsewhere, veteran harmonica player Jimmy Hall is tapped to play blistering harp on the sinewy blues of "Final Day." It's the kind of collaboration that finds Nielsen drawing from longstanding relationships and opportunities to better a song versus it being any kind of strategic marketing maneuver that oftentimes looks better on paper than in reality.

Wrapping up this baker's dozen-worth of songs is a reading of John Lennon's "Gimme Some Truth" featuring friend and ex-Sex Pistol Steve Jones on guitar. While fans might scratch their heads over the decision for the apolitical Cheap Trick to cut one of Lennon's more overtly political songs, it made perfect sense to Nielsen and his band mates.

"We're not a political band, but we talk about politics amongst ourselves," Nielsen explained. "These are songs that we'd written over a period of time, including during the last four years of the last administration—it's about how to be optimistic in a pessimistic world. We decided to do ['Gimme Some Truth'] so John Lennon could get all the credit and all the criticism. It seemed an apropos song."

Dependably consistent might be the best way to describe Cheap Trick. For Nielsen, his musical path started out being the son of opera singers who moved the family from the Chicago suburb of Elmhurst, Illinois to Rockford, where they opened a music store. By the time he was 13, the younger Nielsen was a drummer in The Phaetons, his first school band. Tired of having to get up from behind his kit to teach his group's guitarists the proper chording for the Stones and Beatles covers his group was performing ("I didn't know how to play, but I knew a right note from a wrong note"), he eventually switched to guitar.

"I was self-taught and I still think of myself more as a songwriter than a guitar player," he said. "There are all these guitar whizzes around—I'm not one of them."

In the nearly five decades since forming, Cheap Trick has relied on a disciplined work ethic that Nielsen acknowledges has earned them a reputation for being a rock-solid live act to this day ("Wham, bam, thank you ma'am. We get up there and play. We're fortunate that we have so much different material to pick from.") And while the fickle tastes of the music industry and fair-weather fans have ebbed and flowed, Nielsen and company have established both a solid canon of music and become a much-loved cult act whose hard work landed them in the Rock and Roll Hall of Fame in 2016. For Nielsen, his band's longevity is rooted in staying true to their roots of being a rock and roll band with an ear for pop.

"I say this as kind of a joke—we've never progressed," he said. "We didn't try to be something we weren't. We started off pretty good but to never progress means we didn't want to be a jazz group or a metal act. We're just trying to be what we did. To this day, we've never had fire pots or explosions. We're Cheap Trick. The playing and our music set us apart. We didn't have any dance steps worked out. We've never worried about changing for the sake of change."