New Beer in the Pearl

Von Ebert not just "yet another Portland brewery" 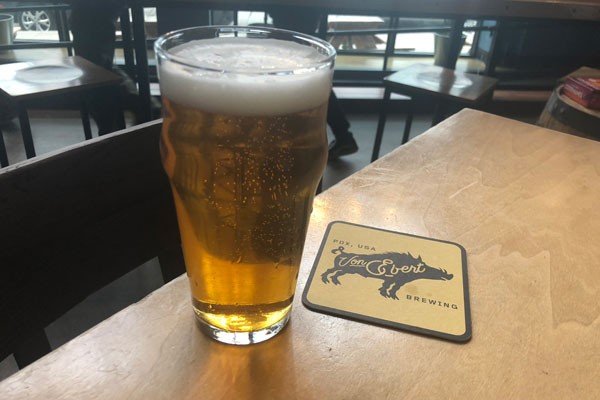 It can be difficult to stand out as a beer destination in Portland, which has literally hundreds. It can be even harder when opening up a new spot in the Pearl District, where one can currently spit and hit a corner bar with 12 local drafts (or at least one Boneyard tap). But a scant three weeks after its public launch, Von Ebert Brewing–which occupies a spot on NW 13th and Davis, near the Portland locations of Deschutes and 10 Barrel—has already succeeded in both endeavors.

If the address sounds familiar, that's because it likely is for Oregon beer fans. The building, a furniture factory way back in the day, was first occupied by Fat Head's Brewing back in the fall of 2014, the lone Western location of the Ohio-based brewpub. It was a successful-enough place, with a couple dozen locally made beers and enormous Midwest-style sandwiches, but the Portland location was a franchise of the original, not an independent outfit, and the two sides decided to end the agreement in late 2017.

This led owner Tom Cook to relaunch at the Fat Head's site, as its own brewery, with its own name. Indeed, Von Ebert looks familiar enough on the outside. Most of the brewpub's staff is still on the job, and considering the location was closed for only eight days in March before relaunching, the changes to the interior are pretty low-key.

The main new things: The food menu (say goodbye to pierogis, hello to pizza and charcuterie boards), and the direction the beer's going. For the relaunch, Cook brought on brewer Sean Burke, who left The Commons Brewery a few months before the Belgian-influenced outfit closed its main facility in November.

With the new hire (who's working both at the Pearl and in Cook's other brew facility in Gresham), the beer menu's undergone some revamping. There aren't quite as many IPAs as there used to be, although what's on there is still great. Have a peek at Battlestations!, built as a showcase for the Simcoe and Centennial hop varieties. But Burke's past experience means the selection, while still offering lagers and other traditional American varieties, has been nudged toward Belgium a bit. Saisons and experiments with yeasts are on the list, as well as an astounding 10 different barrel-aged varieties. (It's hard to pick a single number-one from the 10, but Red Bearded Man, a Belgian strong dark with tart cherries aged in brandy barrels, is one heavy standout.)

All the adjustments mean the Pearl has yet another craft destination for aficionados to visit. It makes it that much harder to pick a spot in the neighborhood to visit, but with all these heavy hitters in a five-block space, it's hard to go wrong.