Hillstomp writes their most personal album yet, while still letting you rock the eff out 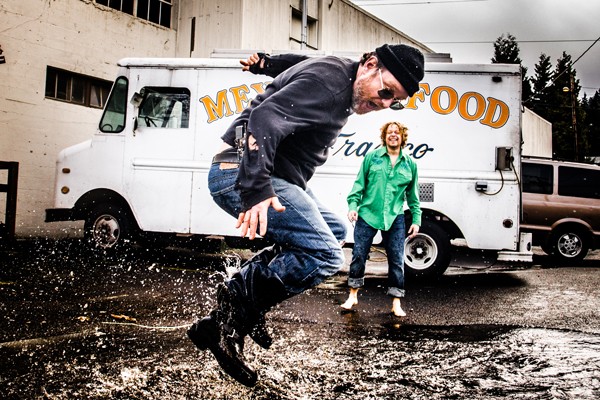 Whether you've lived in Bend for six months or 60 years, you may very well have gotten down to the slide guitar and bucket banging sounds of Hillstomp. The Portland-based, bluesy-rock duo has been performing in Bend for 15 years, and they say they love coming back year after year.

Hillstomp's string man, "Hurricane" Henry Hill Kammerer believes Central Oregon's love of hometown heroes, Larry and His Flask, helped pave the way for a band like Hillstomp to make a name for themselves in Bend.

"The tone was set for us with the Flask. We do that. We get carried away in a similar kind of way. They taught Central Oregon how to properly behave at a rock show," Kammerer jokes.

"You guys are freakin' crazy," Kammerer says. "Our first gig there, we played at McMenamins. I love Mcmenamins—we have pretty tight ties with them. But the room, it was lit up with fluorescent light; not even a real PA. It was a banquet room. We thought, 'this is going to be the weirdest freakin' gig of all time.' But 200 of you whackos stepped into that room and tore it up."

If you haven't heard from Hillstomp in the last couple months, it's likely because Kammerer and his partner in rhyme, John Johnson, have been at work in the studio, recording Hillstomp's first album since 2014.


"I can and get out every emotion that I can while I can. And John is flexible enough to adapt to everything I throw at him. Now, when I've written five-minute-long banjo songs, he's able to find a drum beat." tweet this

Kammerer believes that lyrically, the new songs take inventory of the band members' lives up to this point. Being in their 40s now, he wanted to look back on what was and what will be.

"It's more personal in some ways than other records we've made before," Kammerer says. "We couldn't have gotten away with this record even 10 years ago, because I was unable or afraid to write from such a personal point of view. I've realized that Hillstomp is my bull horn to the world. I have to tell every story I can and get out every emotion that I can while I can. And John is flexible enough to adapt to everything I throw at him. Now, when I've written five-minute-long banjo songs, he's able to find a drum beat."

As a band on the Fluff & Gravy Records roster, Hillstomp has access to a lot of musicians and resources, so for the new album, Hillstomp will feature instruments they've never used on a record before. Kammerer wrote a country song for the record, for which he thought a fiddle player might sound nice. With their connections, the band was able to make a call and get a fiddle player across town to record. While 10 of the 14 tracks on the yet-to-be-released record will be just Kammerer and Johnson, the addition of new sounds and players will bring new depth to the Hillstomp sound.