New Outdoor Adventures, Made In C.O. 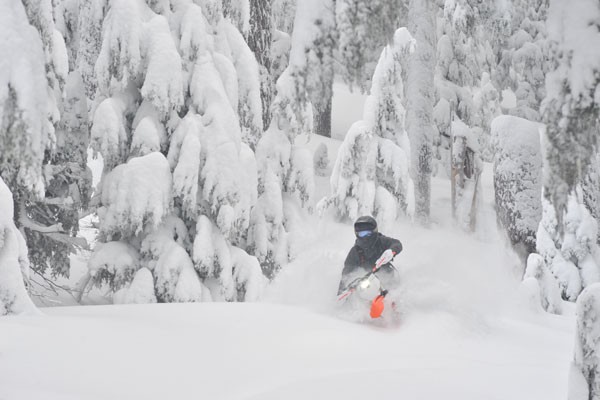 As if there weren't enough options for enjoying Bend's awesome winters, Cascade Snowbikes added another one this year: motorcycles with a snowmobile-type track.

Cascade Snowbikes is owned by Dave and Casey Reuss. The couple came up with the idea in 2016 and just opened the doors Feb. 15. The Reuss' convert dirt motorcycles for riding in the snow, also renting their own bikes for $350 per day from their home-based shop.

Dave Reuss grew up riding BMX bikes and building tracks in Northern California. He followed his passion for BMX riding and track building across the country, even helping build the Woodward West dirt jumps in Southern California in 2003. In 2007 his dream to live in the mountains came true when Reuss was hired by Mt. Bachelor to shape jumps in the terrain park.

"I've spent the last seven years learning our area, extending my Avy [avalanche] education, and figuring out how to have successful days in the backcountry," Reuss told the Source.

Reuss said the concept of snowbikes has been around since about World War II, but he said the modern bikes credit goes to 2Moto brand, which went into production about 2009.

"When snowbikes caught my eye a few years ago, I was floored," he said. "It's the perfect combination of all the machines you could ever ride. I love wrenching and modding things. I love riding, and especially love the backcountry, and snowbikes hit all the marks. These machines have got to be one of the raddest inventions in the last 20 years, way better than smartphones."

"Our first renter took a bike out the first day we were open," Reuss said. "We are planning on organizing a couple group snowbike rides in the coming months to help build the community."

"We know that we are catering to an emerging niche market, but we believe once people get the opportunity to ride a snowbike, there are going to be a lot of folks leaving their sleds behind," he said.

In the summer months, Reuss said the company is considering converting its bikes back to dirt use for rent. One of the company's biggest goals is to secure the Forest Service permits they've submitted so they can guide next winter. Another is to prepare their clients with the proper resources, tools and knowledge before they head out into the backcountry.

"Before our clients head out, we check the weather, look at Central Oregon Avalanche Association observations and go over avalanche tools—shovel, beacon, probes—and talk about trip planning and decision making," Reuss said.

"All of these things help contribute to good days in the mountains, and we aim to be stewards of safe and sustainable backcountry travel."

Central Oregon Jeep Tours, which opened its doors on New Year's Day, can take up to six passengers on tours in its highly customized, four-door Jeep Rubicon bearing the call sign: "The Iron Patriot."

Owner Jay Harness is an 11-year Army veteran, serving as a military policeman and narcotic and explosive K9 handler. He finished his career as a bodyguard for James Stavridis, who was the supreme allied commander of Europe and a NATO admiral.

"Not only do we provide tours to every location in Central Oregon, but we also offer hunting and fishing tours for those looking for the best spots and are looking to go off-roading in some very beautiful and remote locations," Harness told the Source.

In addition to the remote tours, Harness' business also offers night tours, shuttle services from Drake Park during the summer months and customizable picnic packages. Central Oregon Jeep Tours start at $35 per group—which is six people or fewer—and go up to $450.