Residents of Old Bend are largely satisfied with new pilot parking program, but the City Council is concerned about equity

The Old Bend Parking district pilot program expires at the end of the year but is likely to be renewed with a few tweaks. The City started the program at the start of 2021 after Old Bend residents complained that on-street parking was limited in their neighborhood from floaters, downtown shoppers and people visiting Drake Park. Beyond congestion, neighbors also said they felt unsafe with drinking floaters wandering through their yards. 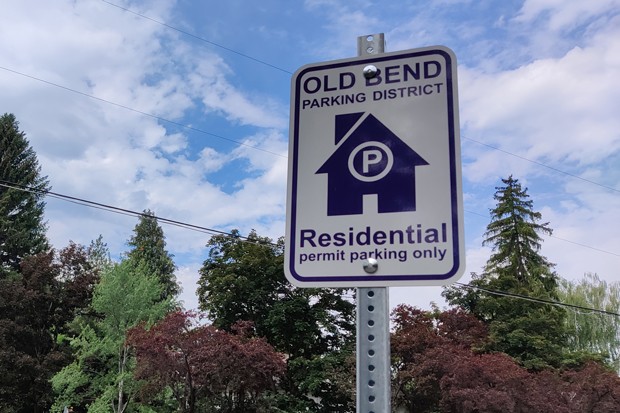 The pilot program made more than $112,000 in its first year, mostly from the 3,177 citations issued totaling $84,500. Parking enforcement tried to be lenient in its enforcement since it's a new program and voided or dismissed about 28% of total citations.

"We adjusted our enforcement approach a lot," said Tobias Marx, Bend's parking services manager, during the Bend City Council meeting on Nov. 17. "We adjusted it from routes to also more grace periods."

A survey sent to Old Bend residents in April and May sought input on the program, and common complaints were that getting visitors passes was too complicated, signs weren't clear on where parking is allowed, short-term parking was lacking and that people didn't know where event parking was. Marx said they addressed these issues by directly sending visitors passes to people, updating signs, creating more two-hour parking spaces and coordinating with event organizers.

The City recently sent another survey to all 575 addresses in Old Bend to determine whether residents want to continue the program. The City collected 161 responses, most of which were pleased with the program. Over 67% of respondents said they saw reduced traffic, 76% that livability improved and 70% that the program improved safety. There was a 75% satisfaction rate and 80% would like the program to continue.

While people living there largely expressed support, Bend City Councilor Barb Campbell is among those concerned about potential inequality in guaranteeing a public right of way exclusively to people living in an expensive neighborhood. She also didn't want to rely too heavily on survey results since it didn't account for the rest of the city.

"The way I see it this survey is pretty much asking the recipients how do you feel about being given this program and the privilege of being able to get these parking passes which just cost a tiny little bit of money," Campbell said during the council meeting. "So we ask them how they feel about being on the receiving end of this—but nobody asked the rest of the City."

Councilor Melanie Kebler suggested making all spaces available as paid parking, opening it back up for non-residents but reducing congestion by making it time-restricted to two to four hours.

"I think that generally the trend in the parking world for parking benefit districts is to make it all paid and then have residential permits," Marx said. "I think the reason we didn't suggest that in the beginning is that we don't have a precedent yet for on-street paid parking."

Marx said going forward the program needs to find a solution for bordering neighborhoods that are affected by Old Bend's restricted parking.

"This will be kind of outside of the Old Bend district, but engaging neighbors on the border or the buffer zones like NW Georgia or Delaware on the other side of Broadway that are just outside the district that have clearly expressed to us that they see a little bit of a ripple effect," Marx said. "I think there is enough there that we should have a conversation."

City Manager Eric King said it may be possible to implement the changes suggested without major changes to City codes, and that City staff will establish new frameworks and bring the issue back to City Council in the future.