With Bend’s population boom, Central Oregon was in the center of the drama over where to put the state’s new congressional seat

October 05, 2021
comment
Hours before a deadline on the night of Sept. 27, Oregon became the first state to redraw its congressional maps for the next decade, following a boycott by House Republicans and last-minute negotiations. The process was especially contentious as Oregon gained its first additional congressional seat in 40 years—and with Bend’s population boom, Central Oregon was at the center of the drama about where to put that new seat.

State lawmakers ultimately passed maps putting much of Central Oregon in a new congressional district that stretches across the mountains to the outskirts of Portland. And while Central Oregon maps for the state legislature gained less attention, lawmakers made significant changes in how the region is represented.


Each of Oregon’s now-six congressional districts has to have an equal share of the population, at about 766,000 people per district. According to Judy Stiegler, a former state legislator and political science professor at Oregon State University-Cascades, it was inevitable that Bend would end up in a different district due to its immense population growth.

“The issue just got down to what district, and how did that look,” she said.

“While I do think that it’s an improvement over the original map, I still believe it was unnecessary to breach the geographical boundary of the Cascade Mountain Range to split Deschutes County into two different congressional districts." —Sen. Tim Knopp tweet this
State Democrats — who hold a supermajority in Salem — originally proposed maps that would have been even more favorable to Democrats, grouping Bend in a district extending all the way up to the Oregon-Washington border in Hood River.

Now, the new fifth district lops Bend in with parts of the Willamette Valley and is seen as a relatively competitive seat, with a partisan lean of D-3, leaning Democratic. The outskirts of Bend, along with La Pine, remain in the Republican’s safe second district, which takes up the rural eastern half of the state. 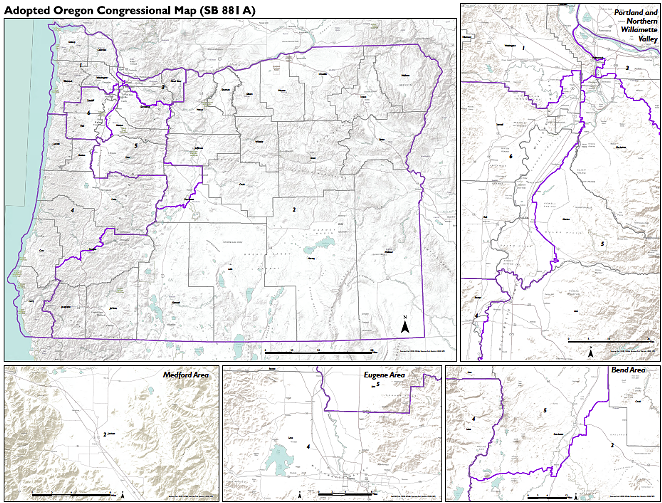 “While I do think that it’s an improvement over the original map, I still believe it was unnecessary to breach the geographical boundary of the Cascade Mountain Range to split Deschutes County into two different congressional districts,” said Knopp, who represents Central Oregon’s State Senate District 27.
But Stiegler highlighted that this isn’t the first time that Bend has had representation from across the mountains: Prior to the 1980 redistricting, the monstrous second congressional district stretched over to the Willamette Valley, since there had yet to be population booms east of the Cascades.

Regardless, according to a statement from Senate Republican Leader Fred Girod (R-Lyons), “There will undoubtedly be court challenges to follow.”

Challenges to the congressional maps are due by Oct. 12, and ones to the legislative maps must be filed by Oct. 25. All court decisions must be made by the March deadline for filing to run for office.

Despite the Republicans’ efforts, experts don’t expect the maps to be overturned.

“At the end of the day, I think the courts are going to look at it and say the ultimate decisions that were made were based on sound reasoning,” Stiegler said.


Compared to congressional redistricting, map-drawing for the state legislative districts flew under the radar. Still, lines shifted significantly in Central Oregon, with Bend’s House district shifting inward around the city and the surrounding areas being redistributed to other districts.

Since the 1990s, the region’s state House districts have resembled a “donut” and “donut hole.” House District 53, or the donut, made up much of Deschutes County, including the more conservative-leaning regions of Redmond, Sunriver, Tumalo and Deschutes River Woods. District 54—otherwise known as the donut hole—was carved out of District 53 and included most of the more liberal-leaning Bend.

Related Drawing the Lines: State lawmakers are drawing new maps for the State House and Senate, as well as U.S. Congressional Districts. What will this mean for Central Oregon?

Drawing the Lines
State lawmakers are drawing new maps for the State House and Senate, as well as U.S. Congressional Districts. What will this mean for Central Oregon?
By Hanna Merzbach
Local News
In the past 10 years, Bend and its surrounding areas have seen some of the most growth in the state: Bend’s District 54 saw a population increase of nearly 15,000 people, growing to over 78,000 residents. The surrounding District 53 saw an increase of almost 10,000 people, rising to over 74,000 residents. Since each house district could only have about 69,000 people, the Central Oregon districts needed to shed some numbers.

“I think it was predictable that there would be changes, but I don’t really see that it changes the balance of those districts that much,” said Stiegler, the political science professor who also represented District 54 from 2009 to 2011 as a Democrat.

District 54 — which now includes Downtown Bend, most of the west side neighborhoods south of Newport Avenue and portions of the east side—will likely be more strongly Democrat, Stiegler explained.

Rep. Jason Kropf (D-Bend), who flipped District 54 in the Democrat’s favor last year, was pleased with the new maps.

“These maps meet all statutory requirements and uphold the constitutional principle of one person one vote,” Kropf said in a statement. But his Republican counterparts said far from the same. Knopp, who represents the Senate district that includes House District 53 and 54, took issue with the districts dividing Bend north to south, when Bendites typically refer to themselves as “west siders” or “east siders.”

“Really what it feels like was the maps were drawn by someone who doesn’t live around here,” said Knopp.

District 53 no longer wraps all the way around Bend, shedding its southern half, which includes areas like Deschutes River Woods and Sunriver, and its eastern half around Bear Creek Road. Those regions now fall into District 55, which extends all the way down to Southern Klamath County along the Oregon-California border.

“There’s a lot of people on the east side of Bend that’re going to be represented by a representative from Southern Klamath County,” Knopp said. He added that District 53 and subsequently his district, Senate District 27, now includes Sisters, Black Butte and Eagle Crest, which all used to be lumped in with a district that stretched up to The Dalles.

Rep. Jack Zika (R-Redmond) highlighted that District 53 splits Redmond in half, putting much of its population in the surrounding District 59, which includes Madras and Prineville and stretches east to the Ochoco Mountains.

“These redistricting maps have a blatant disregard for keeping communities together,” Zika said in a statement. According to Stiegler, these observations are legitimate, but it was inevitable for people to be pushed out of their past district.

“There’s no way to have drawn it perfectly to meet everyone’s expectations,” she said. “I think it was probably as bipartisan as it ever was going to be under the circumstances.