A ribbon cutting ceremony took place June 21. The hub is set to start seeing buses and passengers in July 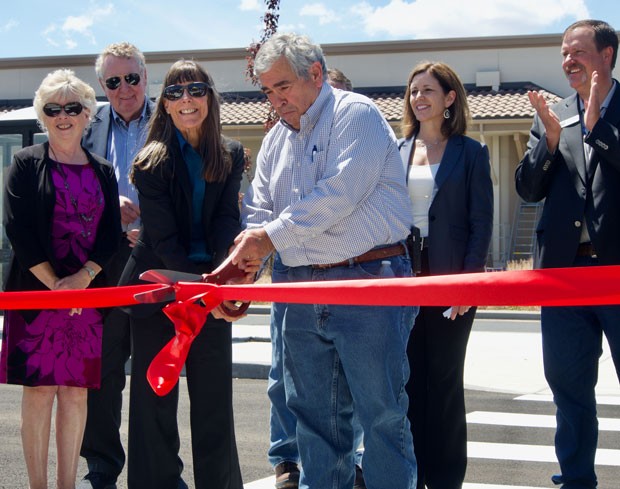 Standing in the direct sun June 21, Redmond Mayor George Endicott grabbed a pair of comically oversized red scissors, stood in front of a crowd of about 40 and sliced through a red ribbon, signifying the opening of the new Redmond Transit Hub, officially set to open in early July.

The new hub will have more modern amenities, including real-time arrival signs, passenger shelters, restrooms onsite and dedicated loading areas for each bus. Artwork adorns the hub, including a firepit from this year's WinterFest.

Karen Friend, director of the Central Oregon Intergovernmental Council, which runs Cascade East Transit, said the new hub will allow buses to come and go individually, unlike Bend's Hawthorne Station, where buses can stack up because it's on a public street.

Endicott said the Homestead Trail Project, a 5.3-mile trail off Odem Medo Road and Highway 97, ends near the new bus hub, allowing people to walk or ride to catch the bus to Bend or other points in Central Oregon—all without the use of a car.

Endicott also pointed out that the residents of Cook Crossing, which provides 48 apartments to low-income senior citizens, have free access to CET. Cook Crossing, located on Veterans Way, is within walking distance to the new transit hub.

Friend said this year marks the tenth anniversary of the regional transit system, which got its start in April 2008. She said the transit system is unique because of its regional connectivity.

"We set aside for connection to communities," Friend said. "Others haven't prioritized that connection."

Theresa Conley, District 4 regional coordinator for the Oregon Department of Transportation, said ODOT put $1.1 million into the transit hub, which is part of the larger Connect Oregon Project. The total cost of the Redmond project was $1.7 million, according to Derek Hofbauer, outreach and engagement administrator for COIC and CET.

According to Friend, about 10,000 riders pass through the Redmond hub each month. She said people near the old hub—near the Deschutes County Library—are probably happy to see the buses go.

"We're not a favorite customer of the library," Friend said, laughing.

Currently, Redmond doesn't have daily buses that run through the community, something Rhoads said may change with Redmond's growing population.

"Redmond has grown over the past few years and it is a good time to take a serious look at designing a fixed-route bus system for the community," she said. "That would allow people to simply hop on the scheduled bus, rather than needing to call to reserve a ride in advance. It increases independence, mobility, convenience and access to the community."