When Bad Wolf Bakery and Bistro shut its doors in September, head chef Spencer Montoya found himself displaced. He moved on to a pizza parlor, but continued looking for an innovative restaurant that would allow him the opportunity to express himself. Fortunately for Montoya, he soon caught wind of a new restaurant opening—in the very space Bad Wolf once occupied. 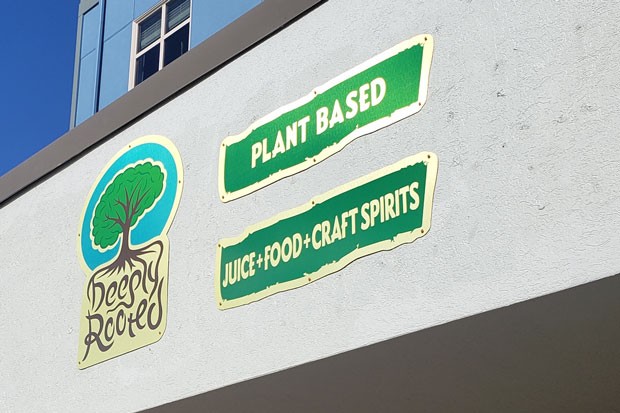 Deeply Rooted, an exclusively plant-based restaurant, is slated to open the first week of March. "We're a completely plant-based, from scratch kitchen," Montoya said. "It's conceptually unique in that we're both a juicery and a bar, featuring fresh juice and craft cocktails. We're doing everything from comfort food to raw dishes, and everything is locally sourced and sustainable. Our goal is to change the way people think about plant-based food."

A plant-based diet consists mostly of foods derived from fruits, vegetables, nuts, seeds and legumes. "The owner, Devin Sims, is a longtime vegan," Montoya explained. He noted that the divergent approach to plant-based food is going to be mirrored by the restaurant's décor. "Most of the woodwork inside the restaurant was done by Devin and his close friend. Right now we're really bringing everything to life and making some final additions."

Montoya is working closely with his culinary and cocktail team to make sure every recipe is perfected. "I was hired to come up with all of the recipes for the food and juice menu," he said. "Macey Martin, the bar manager, is coming up with all of the cocktails. I'm really excited to finally bring our comprehensive menu to the public. Bend has a lot of amazing food, but it doesn't have anything like this."