I discovered Forth Distilled Goods the way most Bendites who are already hip to them have: at the Northwest Crossing Farmers Market. That market is now closed for the season but fear not, if you're looking for that tasty, canned Bourbon Smash, co-founder Joey Pleich offered you a sample of, you can soon find it at their own tasting room opening soon in midtown Bend. What's more, you can try that ready-to-drink (RTD) cocktail or their other equally enchanting one, the Cucumber Gimlet, or even a series of bottled RTDs. In other words, Forth proffers cocktails for home for those who may not aspire to be home mixologists.

Obviously, Americans' drinking habits changed during the pandemic. And since we're not out of it yet, those new homebound habits have led to a rapid rise in RTD sales. Neilsen reported that RTD sales nearly doubled as we vaguely started quarantining and drinks market analysis company IWSR reports it's still the "fastest growing beverage alcohol category," making it a $5 billion a year industry, according to industry research company IBISWorld.

The two-man company is composed of Pleich, who came from Deschutes Brewery and tackles sales and marketing, while Bend native Ben D. Brewer (real name) has a degree in chemistry from Oregon State University and handles product development.

Farmers markets have treated the nascent Forth well—Pleich has sold as many as 60 cases in a single day—but as awareness and demand grow, locals will soon find their products in more liquor stores around Oregon. The perks of picking up their boozy delights at the almost-ready tasting room include, chiefly, being able to sample before you buy. Like other distillery tasting rooms, half-ounce samples will be available. The bottled offerings come in re-useable swing-top bottles (with the required deposit going to a nonprofit, while those cans go straight into your recycling bin).

"It's essentially a growler fill program for cocktails," Brewer remarks—though it's highly advised the consumer supplies their own ice and fresh garnish.

As the name implies, Forth makes distilled goods but is not a distillery. At least not yet. As is prevalent in the industry, the initial spirits emanate from Midwest Grain Products in Indiana. But one thing Forth doesn't do is mix vodka or other banal grain neutral spirit with artificial flavors to create seltzer-like drinks. Both canned cocktails are 5% alcohol and carbonated (too bad floating season's over), while the five initial batched bottles are 20%. Actually, the Motor Bike is 21%, but we'll get to those in a second.

Related Hard-ly Drinking: A roundup of the myriad hard seltzers locals are enjoying in 2021

"We're a full-flavored cocktail without being full strength," says Brewer from behind what will be the bar. "They're relatively light in sugar and alcohol, but with depth of flavor and complexity." 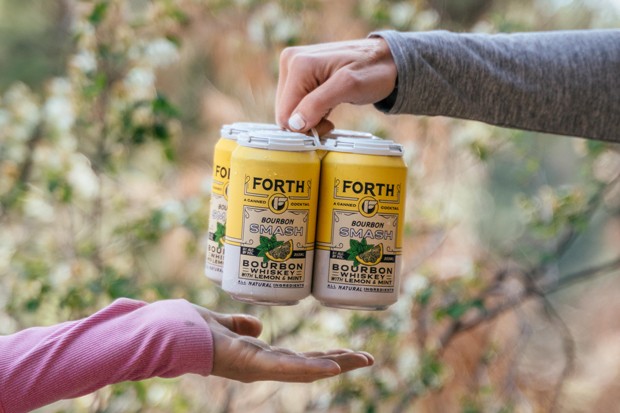 Most of Forth's offerings are vintage cocktails; no reinventing of any wheels.

There's a "healthy struggle between vintage—we take a lot of inspiration from these cocktails that have been around a long time—and taking something that's classic and putting it in a new format delivers in a way that consumers want to imbibe these days," says Pleich.

The first ones include a Negroni (gin, amaro, sweet vermouth), gin martini, Goldilocks (perhaps better known as a relative newcomer called Penicillin, and made with rye whiskey, lemon, ginger and honey), Evergreen (gin, cucumber, lime), and the aforementioned Motor Bike (rye, amaro, lemon). Forthcoming bottled beverages include an old-fashioned and a barrel-aged Manhattan, among others including seasonal releases or twists. Additional canned brands are coming, too.

The cans are $13.95 per four-pack while the bottles are sold for $39.95 each. The duo is likely to launch a club or subscription program, as well.