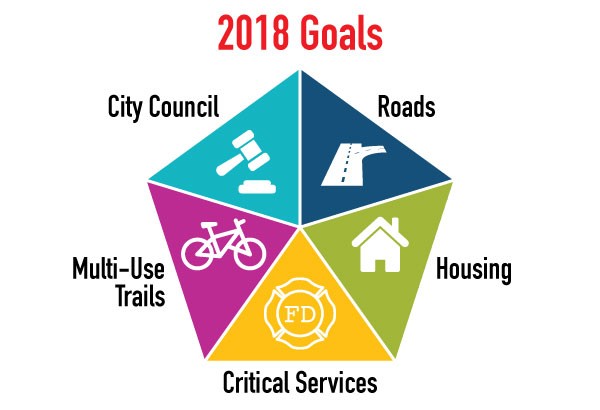 When sorting through the various projects, initiatives and ideas for the upcoming year, a common theme emerges: out with glamourous investments (waterpark, anyone?) and back to basics—the critical systems that make a city run. You know, the not-so-sexy stuff, like roads.

With an estimated six people moving to Bend each day, an increase of 6,000 new cars on our roads per year and the population set to increase by 40 percent in 10 years, according to the City of Bend, there's no doubt there's been a squeeze on our current infrastructure. The ideas floating around Bend show the city is adjusting to the changing rural landscape of our community—to one of a thriving future metropolis.

How did the new City Council fare in its first year?

"In some ways it's been satisfying and in other ways very frustrating," says City Councilor Bill Moseley. "...The residents in Bend are so, so gracious... But the council, well, it's an odd group of people," he adds laughing. "They're effectively a board which oversees a $350 million budget with 600 employees. And if this was a nonprofit or in the private sector I don't think you would pick this group of people to run it."

Moseley, CEO of the tech company, GL Solutions, points to the recent evaluation of City Manager Eric King, as an example of where old habits die hard. "They didn't want to measure his review based on how he met his goals but on how well he communicated. He's effectively a chief executive who makes a quarter million dollars with benefits, and they didn't want to assess him on facts."

New council rules will help improve some of these processes. For one, new rules will restrict councilors from presenting new ideas to just one time, at the beginning of each month. Mayor Casey Roats, excited about the change, says "I literally think people would think of an idea on the spot, vocalize it out loud, with little research put into it," adding, "it's awfully easy for a group of volunteers to spread ourselves thin."

Another change? A possibility of an elected mayor, with an increased four-year term (also on the ballot in May). Moseley adds, "With new people, rapid building, existing neighborhoods are getting denser and alarmed citizens want solutions. Our current structure emphasizes our very real problems."

T is for Transportation

With a newly appointed citizen-led Transportation Safety Committee, expect to see big ideas in the next 12 to 18 months surrounding the way Bendites move around the city.

The 25-person committee will hold monthly meetings beginning in February and will examine the best technical solutions, applicable to a city with such geographical and funding limitations. "There are constraints in our city with the way it was originally built, the river, anchored by buttes and intersected with a railroad—so we'll have to realistically see what we can do," says Roats. He points to existing projects connecting Murphy Road and 27th Street extensions as small progress and wants to tie in the 13 neighborhood associations to get more feedback.

Known as the board member who crunches numbers, Moseley agrees that transportation, as well as housing, are the two major players for 2018. "We'll get a lot of fixes," says Moseley, a big advocate in the creative approach the city took to finding an additional $1.5 million for street preservation following last year's heavy snowfall. "Everyone said there wasn't any money, but with a bit of forward thinking we were able to find it."

From Crisis to Solutions: Housing

If 2017 was the year of highlighting the housing crisis, then 2018 could be the year of trying to mind the gap. The city developed just 132 affordable housing units in 2017, but Roats says, "We have to remember it takes a while for the housing market to respond."


The city relaxed permitting requirements, trying to spur the construction of Accessory Dwelling Units and affordable housing. Moseley says the council could do better. "In my first year I was surprised at how seldom the council directs city staff in planning... and there isn't a lot of specific goals." He continues, "So you would hear housing was a big problem across all income levels and yet, it took me nine months to convince them to do a broad housing initiative."

Moseley's plan is in line with other council members thinking of a "multifaceted" approach. Instead of just focusing on subsidies—such as dropping System Development Charges on affordable housing projects— Moseley adds, "We need to focus on raising middle income wages, having tradespeople to build homes and provide housing across all income levels."

"We need to prioritize planning dollars and move house plans ahead quicker than what they can do on their own," says Roats, "We just need more supply, period."

T is also for: Trails

"Right now we're finishing up our comprehensive plan which will be the guiding document for us in the next 10 years and will help prioritize project investment," says Michelle Healy, planning and park services director at Bend Park and Recreation District. The main thing she's heard from the community? Greater trail access, and equitable access.

Don Horton, BPRD's executive director, says trails which were primarily built for recreational use also now need to be built or adapted with transportation use in mind. "Linking the eastside and westside are of course on our radar and we're working with the city to try and get great crossing points at Third Street." Horton says the future of transportation trails is in using Central Oregon Irrigation District ditch-rider canals.

Riley Ranch, just opened on Dec. 20, is another highlight for 2018. The 184-acre nature reserve showcases the changing needs of the city, in that is doesn't allow dogs or bikes. "It's a space where people can commune with nature without those user groups. It's been the first time we've done something like that," says Horton, adding that last week, staff reported seeing a young black bear, an example of the wildlife the reserve attracts.

Investment in new parks in the southeast and northeast areas of the city are also on the docket with parks such as Alpenglow currently in the design process. Horton says he's most excited about the addition of another community center at Larkspur. "We're in our final design stages and then we'll be looking at construction permitting."

"We're waiting to see what direction parks is taking and what they want to support," says Roats, "but it honestly feels like we're getting some mixed signals." Horton says there hasn't been much discussion since the Department of State Lands requested Mirror Pond Solutions, LLC provide soil samples of the pond sediment and extended the deadline to Dec. 31, 2017. "We want to concentrate on our bank restoration project (along Mirror Pond) and honestly that project has become more costly than we were hoping."

So it seems dredging Mirror Pond is dead in the water, for now.