No bones about it, 2018 was a rough one for the marijuana industry. Wholesale prices for marijuana plummeted and we saw the Oregon Liquor Control Commission halt new-license application processing in June, with no certainty if or when new licensees will get the chance to enter the market. Finally, we witnessed an anti-marijuana zealot elected to the Deschutes County Board of Commissioners, bringing the anti-weed zealot tally to two, or 67 percent of the Board. If you're applying for a land-use permit or change to a permit that will go before the board, bring some extra spending money to appeal to the Oregon Land Use Board of Appeals. Commissioners Phil Henderson and Patti Adair are odds-on favorites to rubber-stamp "no" for any marijuana application of any kind. 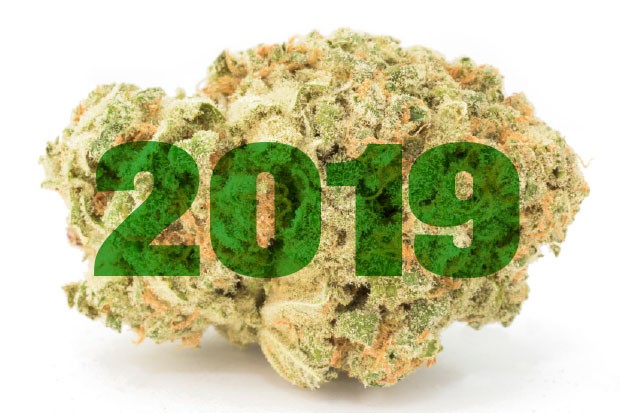 For consumers, a lot of this is good news, as prices are falling at retail shops. Even for those wholly opposed to the cannabis industry, there's solace in the unregulated market watching profits dry up (which is one of the main philosophical/political drivers behind ending prohibition and removing the public and private costs of criminal penalties).

Also ringing in the new year are some new OLCC rules.

Here are a few highlights:

Medical marijuana patients can now bring home 8 ounces per day (up from 1 ounce, which had been reduced last summer from a previous limit of 24 ounces)

While the federal government has ground to a standstill because the president is being denied his border vanity project, there are some legislative offerings for the cannabis industry. In addition to the STATES Act pushed last year by Sen. Elizabeth Warren (D-Mass.), which would tell the feds to back off of marijuana businesses in legal adult-use states, Rep. Earl Blumenauer (D-Ore.) introduced a resolution to remove marijuana from the controlled substances list entirely. His proposal would put the industry under the supervision of the current Alcohol, Tobacco and Firearms law-enforcement agency. House Resolution 420 (natch) is referred to in the bill as the "Regulate Marijuana Like Alcohol Act." The bill has 26 co-sponsors (up from 19 in the 114th Congress).

With a Democrat supermajority in the Legislature, it might appear that this bill would have a solid chance of passing, but it faces some major logistical complications. First, what state would agree to go against the feds in such a brazen way, and invite federally illegal interstate trafficking? Moreover, because even though this proposition would forbid trafficking through illegal states, and Federal Aviation Administration rules would make air transport of pot dicey, there would only be three states with which trade could be conducted: California, Nevada and Washington.

Finally, at what point does the Republican-controlled executive branch say "enough," and begin handing out federal indictments to marijuana businesses if such a law is passed, a state agrees to play ball, and licensees load up the trucks? Either way, you have to admire the chutzpah of local lawmakers in reaching for the stars.

If nothing else, Prozanski told the Salem Statesman-Journal last month, the proposal would put Oregon cannabis entrepreneurs in the driver's seat should the federal government finally remove marijuana from the controlled substances list, giving the green light to interstate commerce. "I don't want us to be flat-footed and (have) everyone running out at the same time trying to create something," he said.

If you want a silver lining to the turbulent political fights surrounding everything (not least of all the marijuana industry), you can look to the resounding defeats that Racketeering Influenced and Corrupt Organizations plaintiffs are suffering in federal court. RICO plaintiffs in Massachusetts, Colorado and California have all gone down in flames as judges declare their smell and property value complaints either frivolous or downright false. In Oregon, portions of a similar RICO case were dismissed, and another was settled out of court. RICO cases aren't prohibited, however, and there could be a split in the circuits with respect to whether odor can affect property values and therefore grant an award to plaintiffs. Plus, in all cases, defendants are nursing financial wounds, so follow the Fred Rogers rule out there, pot farmers, and be a good neighbor. It's your best defense.