Oregon's over-supply of marijuana has been well publicized (around a million pounds of usable but unsold marijuana is being tracked by the Oregon Liquor Control Commission), and the backlog of applications with the OLCC for new producers, processors, dispensaries and wholesalers was more than 2,200 when the OLCC paused applications effective June 15, 2018. 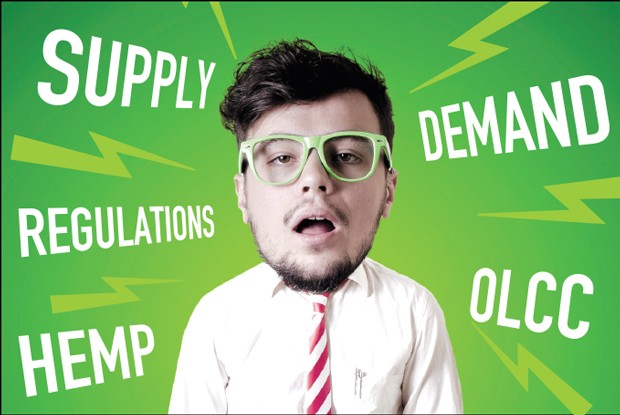 The official word from the OLCC, according to their May 30, 2018 news release, was that the agency would stop processing new applications as of June 15, and they signaled that in 2019 the agency would look out for "further statutory controls" from the new year's legislative session. Thirsty marijuana entrepreneurs hoping to break into the OLCC assembly line in 2019 are better off waiting to see what the Oregon legislature does in the upcoming session to address supply. Even with a Democratic supermajority in Salem, we're not likely to see the same free-for-all, uncapped licensing scheme we've witnessed so far. Colorado has managed to precisely meet demand with their supply (albeit with licensees using far less than their allotted canopy sizes in most cases), and they also require growers to show that the vast majority of their flower was selling.

As always, the federal government has the power to end all supply problems by legalizing marijuana nationwide, but that's still a long way off even after the blue tsunami of November. Sen. Chuck Grassley (R-IA), the chair of the Senate Judiciary Committee, barred discussion of an amendment to the criminal justice reform bill which would have mirrored the Strengthening the Tenth Amendment Through Entrusting States Act. This amendment would have allowed states with regulatory schemes for adult-use marijuana to move the cannabis industry forward untouched by federal law enforcement. Grassley, a notorious prohibitionist, is leaving his post as chair in a week. Lindsey Graham (R-SC) is on deck, however, and he's no Willie Nelson.

It All Smokes the Same!

Meanwhile, closer to home, a hemp farm just north of Redmond fell victim to a Christmas Day robbery attempt, when two people trespassed onto the farm, and mistook the low-THC hemp for marijuana. Thinking they were scoring a free high, one of the two alleged perpetrators was arrested after threatening property owners with a weapon. The second, a woman, eluded law enforcement on foot and "remains at large," according to a local news report.

Of course, if the pair had successfully trespassed onto a licensed OLCC marijuana farm, they would have been identified with security cameras at every corner, assuming they had made it past the commercial locks and silent alarm.

To those already shipping their wares through the OLCC system, some new rule changes are worth reading. Alternating proprietors (marijuana processors who share a kitchen) will no longer be let in under new applications. Existing licensees hoping to renew need to have their documents in and fees paid by the prescribed deadlines or face outright denial. Finally, dispensaries on the edge of an "opt-out" city or county can deliver their medical or recreational marijuana to residents inside the opt-out boundary. You're welcome, Madras suburbs.