New Year's Eve With Larry and His Flask

Hometown rockers Larry and His Flask are prepped to take over the Domino Room New Year's Eve. You can't go wrong jamming out with some local favorites to start the new year, and there isn't anything else the guys would rather be doing, either. 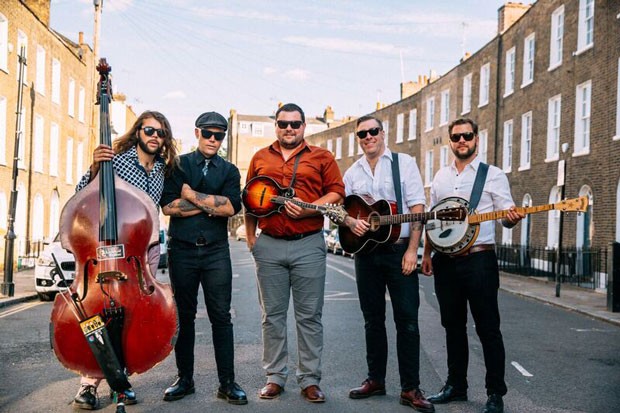 "It's great to be home and playing music," says member Kirk Skatvold. "Not having to look across the country for people who like your music is always great."

One of the other cool things happening that night is the raffle set to help raise money for local nonprofit, the Cascade Horizon Band. Prizes will include a sweet Deering Goodtime banjo and an acoustic Eastman guitar with a Fishman pickup installed. Why the Cascade Horizon Band? A special connection to Skatvold's early musical inspirations, for one.

"I was trying to track down my old middle school music teacher," says Skatvold of CHB's Music Director Sue Steiger. "She used to let [bandmate] Andrew and I into the band room at lunch, even though Andrew wasn't even in band she would still let him jam on the drums. She was always special to me."

Being around for this long as a band, Larry and His Flask have seen the music industry go through a lot of changes. "Probably the availability of music," says Skatvold of the biggest differences between then and now. "I don't see a CD anymore and think, 'I need to buy it.'" This is contributed by the rise of streaming services like Spotify and Apple Music, or as Skatvold even mentioned, the possibility of "downloading from a Russian website."

The band's latest album, "This Remedy," only just dropped this October, but the guys are stoked to get back at it. One of the band's resolutions for 2019 is to try to release more music, considering it had been five years since the previous release. "We hope to have a new EP out, maybe early summer or late spring," mentioned Skatvold. The band appears ready to combat the immediateness of people's attention spans and the music cycle, which also includes a little west coast run coming at the end of January.

Before the music starts you can catch a local art show starting at 7pm. And if you can make it to midnight, there will also be an absinthe toast provided by the Oregon Spirit Distillers. With that, 2019, here we come!