Newts Deserve Respect, or Else... | The Source Weekly - Bend, Oregon

Newts Deserve Respect, or Else...

Victor Berthelsdorf, who lives over in The Swamp on a farm near McMinnville, recently sent me an email with a photo of a great egret posing with a mouthful of rough-skinned newt. 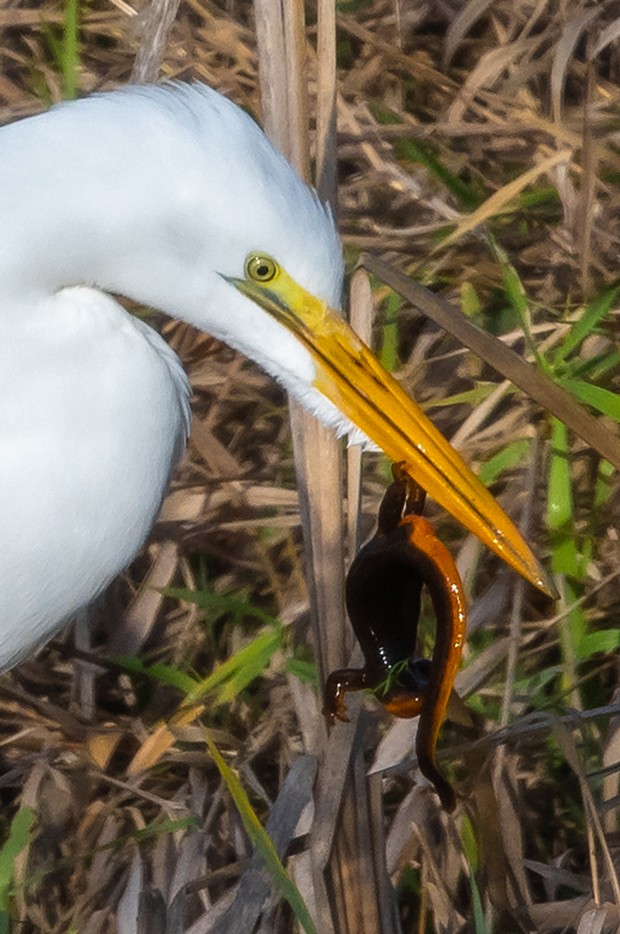 Berthelsdorf's note read: "I was wondering what your take might be on this. Taken Dec. 13. Dazed & confused? Washing it off? Flipping the proverbial coin?"

I wondered, too. Some amphibians can release powerful toxins to protect themselves from harm. That's the meaning behind the newt's scientific name. "Taricha" is the name some people give the toxic substance in the newt's system, and "granulosa" is the description of its skin.

I needed to know more about the impact of the toxin on birds, and sent an email off to my herpetologist pal, Al St. John in Bend, who put me in touch with herpetologist Chris Rambo, who steered me into AmphibiaWeb, where I found information that makes the mystery of the egret and the newt even more mysterious.

The site left me with a lot of "what if's," such as: What if a bird as big as an egret eats a newt — will it die? Do all newts have the same amount of toxin?

According to AmphibiaWeb, "When threatened by a predator, adult newts display a characteristic body posture called the unken reflex, a rigid U-shaped posture that reveals the bright orange ventral coloration.

"During the unken reflex, eyes are closed, limbs extend laterally, the head is raised vertically, the back is depressed, and the tail is raised forward over the body. A release of toxic skin secretions accompanies the defensive posture."

Take a look at the posture of the newt in Victor's photo — you can actually see the toxin oozing from the newt's skin. And the experts have this to say about the toxins:

"If the predator is not deterred by the unken reflex, the newt must rely on chemical defense. Adults possess tetrodotoxin (sometimes referred to as tarichatoxin), a potent neurotoxin that is concentrated in the skin, ovaries, muscles, and blood of adults.

"It is one of the most toxic non-protein substances known, and it also occurs in pufferfishes and relatives. The skin from adult rough-skinned newts is several times more toxic than skin from other species of Taricha."

There is considerable variation in the degree of toxicity of rough-skinned newts in different parts of their range. Skin extracts from Vancouver Island newts were at least 1,000 times less toxic than those of newts from the Willamette Valley. 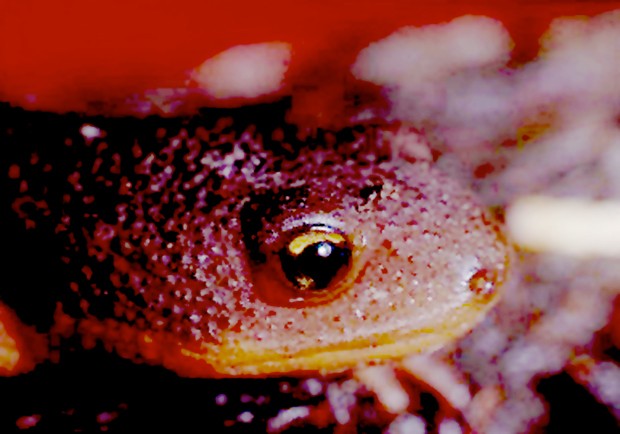 The rough-skinned newt is one of the most toxic animals known to science. There's a story about a 29-year-old guy in Coos Bay who had been drinking heavily and swallowed a newt on a dare. Within 10 minutes, he complained of tingling in the lips. During the next two hours he was suffering with numbness and weakness and then experienced cardiopulmonary arrest.

He died later, despite hospital treatment. In another case, toxin from a Taricha entered a puncture wound on a scientist›s index finger, and he suffered 30 minutes of numbness up the arm into the shoulder, along with nausea and light-headedness.

The final word: handle Rough-skinned newts very carefully and wear plastic, throw-away gloves. Make sure your children leave them alone! And after you've finished handling any newt or salamander — or toad for good luck — WASH YOUR HANDS at least twice.

So, what happened to Victor's Great Egret? We don't know, but I do know what will happen to you if you allow a newt's toxin to invade your body.