Looking for some new ideas for your next outdoor adventure? Try these camping favorites

In honor of the Outside Guide, we submit these ideas for some of our favorite camping foods. It's an adventure all in itself.... 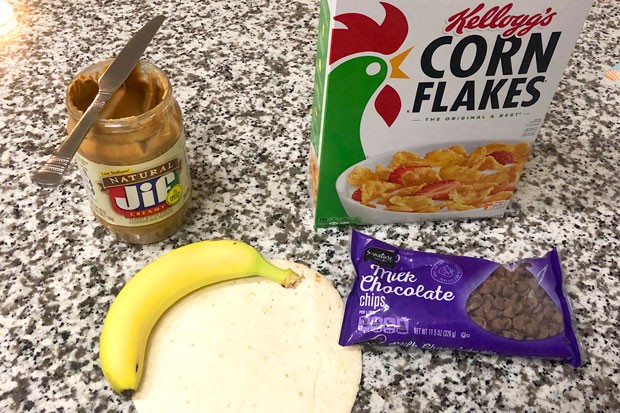 Anytime I go on a backpacking trip, the one consistent item I buy at the store is a bag of flour tortillas. For one, they're light and compact. Two, they have a variety of uses. You can eat them plain, make a tuna melt with your mess kit and stove or, if you're feeling froggy, you can make the "AJ Special." I call it this because a family friend named AJ got me hooked on these in high school. It's quick, cheap and super delicious.

• Peanut butter (or if you're allergic to nuts, any alternative spread of your choosing)
• A crunchy cereal. I use Corn Flakes, but feel free to use another.
• Chocolate chips
• 1 banana
• 1 tortilla

How to make it:
Spread the peanut butter around the tortilla to whatever amount you feel comfortable with. Then, slice up the banana and place it – followed by the Corn Flakes and chocolate chips—onto the tortilla. Once folded, bam – you're done! Store it easily in a reusable bag, wrap or however else you carry your camping/backpacking food. Get this prepped before an overnight trip and it will really hit the spot when you need that extra kick of energy. 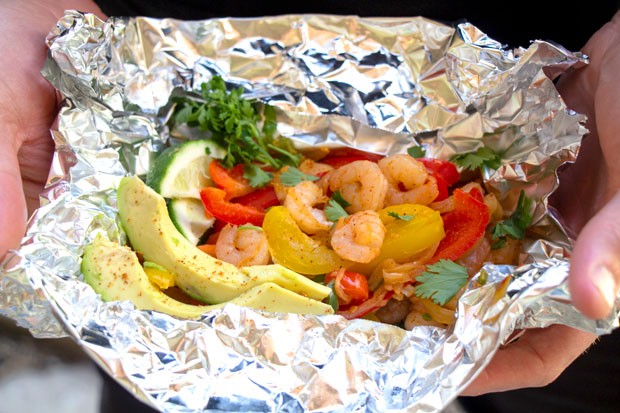 If you're on a diet, or recently made a few lifestyle changes that include an overhaul of your food choices, the prospect of keeping your momentum going in an uncontrolled environment — such as camping with friends—may seem a bit daunting.

Recently, my boyfriend and I started following a (mostly) keto diet. The simplified explanation of a keto diet is eating a minimal amount of carbs, more healthy fats and a moderate amount of protein. If you're going on a shorter one to two-day camping trip, a well-packed cooler will keep your options pretty flexible. A carton of egg whites can fit in a cooler, though dehydrated eggs are also a great option, and protein pancake batter (pre-made and stored in a water bottle) makes easy on-site prep and cleanup.

While there are plenty of keto-friendly meal bars and shakes to fill out your day, it's nice to have a solid dinner while sitting around the campfire. Even if you're not following a low-carb diet, these shrimp fajitas will hit the spot, making for some all-around happy campers.

How to make it:
Use frozen, pre-cooked, extra small shrimp with the tails removed. The packets are easy to throw in a cooler and will be easy to thaw when you're ready to prep them. Prep your veggies at home and throw them in a reusable container. If prepped in foil packets, you can throw them on a grill. If you don't have a grill, sauté all the ingredients in a cast iron skillet on a camp stove. If you're feeling like a go-getter, marinate the thawed shrimp in lime juice and fajita seasoning for 10 minutes or so before cooking for some extra flavor. 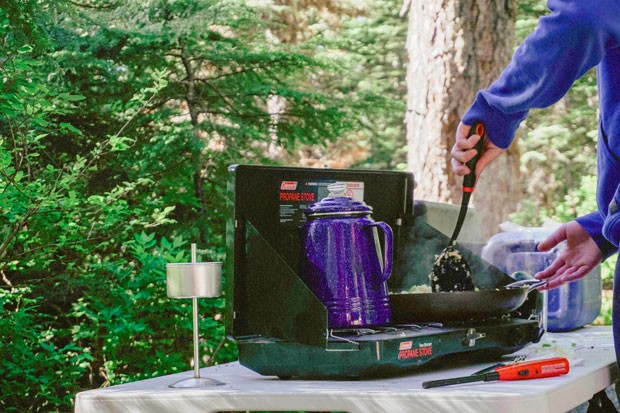 I've been fly fishing for steelhead for over 20 years—many of these years on remote rivers in Oregon. In my early days, my fishing partner Hans and I would eat typical 20-year-old men fare: canned chili, hotdogs and other garbage.

But about 15 years ago, I learned to cook, and the chili brigade ended. Now we take healthful meals—like canned fish and quinoa—but still have the last night feast of Camp-Made Bolognese. Since we're able to drive in to camp, we have the good fortune of large coolers and the ability to bring red wine—essential to bolognese. It takes a while to make, especially with a two-burner Coleman stove, but it's well worth the time invested, and you've got red wine to enjoy!

How to make it:
Heat olive oil in a pan. When hot, add steak cut into bite-sized pieces and seasoned with salt and pepper. Brown meat and then remove and set aside. Add more oil to pan if needed and add garlic, onions, shredded carrots and celery. Cook until carrots and celery are slightly soft. Add one cup of beef broth and simmer down until dry, then add one cup of red wine. Pro tip: if you've got the coin, use Barolo, it's the wine of the gods in Italy. Simmer the red wine down until nearly gone. Then add pasta sauce. I personally use Newman's Own tomato and basil. If I were making the dish at home, it would all be handmade. But hey, we're camping. Pour sauce over cooked noodles and mangia! 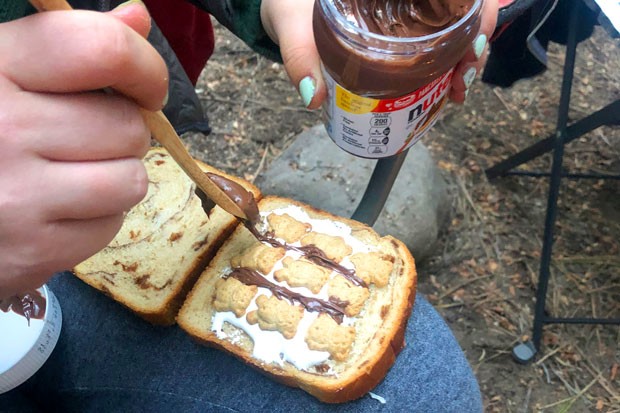 You've likely had them during countless camping adventures—so to mix it up a bit, my family and I set out to make some truly Next Level S'Mores. Warning: These are neither Keto nor healthful, but we bought everything at Newport Market—so that's something, right?

Years ago, a friend handed down an old-fashioned pie iron to us, which we never used 'til now. And now that I've used it, I can imagine all sorts of delicious uses. Pizza pockets? Chinese style dumplings? Fresh berry pies? Yes, yes and yes. For now, though, we started with the S'Mores.

• Cast iron pie iron
• Cinnamon bread
• Nutella
• Marshmallow spread (You can use small marshmallows too, but we were aiming for everything Next Level)
• Graham crackers (We opted for Teddy Grahams, bite-sized and easy to use)
• Oil

How to make it:
Get your campfire going. Cut the crusts off two pieces of cinnamon bread and then spread a little oil on the insides of your pie iron. Place one piece of bread inside one side of the pie iron. The easy route is to dab a large tablespoon full of both Nutella and marshmallow spread on the center of that piece of bread, and then add crumbled graham crackers on top (or place a few Teddy Grahams on instead). Then add your second piece of bread over top and close the pie iron. The harder route is to carefully sweep your Nutella and marshmallow spread over the bread in a grid-like fashion, adding the grahams in an orderly, artsy manner, like my kiddo did—but either way, it's all going to melt together.

Stick that pie iron into the coals or embers of your fire and wait about five minutes before opening up to check the bread. When it looks toasted on both sides, it's time to open the iron over a plate, and revel in the wonder of Next Level S'Mores.