Shooting, Dumping and Cleaning Up | Outside Features | Bend | The Source Weekly - Bend, Oregon

Shooting, Dumping and Cleaning Up 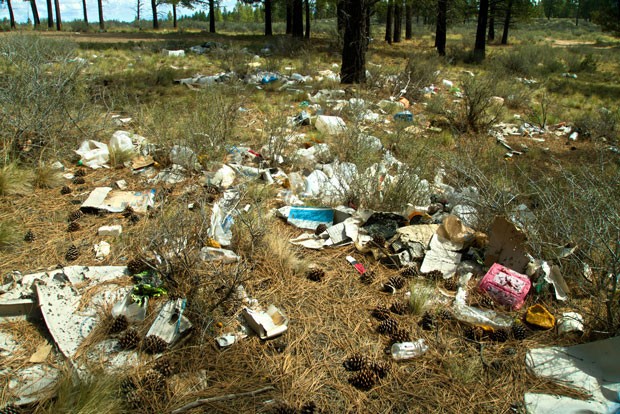 Brent Jenkins likens the national forest to a play area.

Jenkins works for the Deschutes National Forest, and often has his eye on China Hat Road, leading into the Forest in southeast Bend. The road's close proximity to Bend provides convenient access to that section of the national forest.

It's also a quick and convenient dumping ground for just about anything that could alternatively be dumped into the nearby Knott Landfill. In a March 2017 article, those who talked with the Source Weekly described the China Hat access area as a "war zone."

Visit the area and you'll often see junked cars providing target practice for shooters. In this most recent cleanup, volunteers loaded three industrial-sized garbage containers with debris. They could have filled more. The area near Coyote and Cabin Buttes—popular areas for shooting—was strewn with debris, including leftover rifle, shotgun and handgun cartridges and other garbage.

"I'm not sure what the mentality is behind bringing out televisions and things like that. I think it's something they want to get rid of, so they take it out, shoot it up and see what happens to it when it gets hit with a bullet," says Jenkins, who helps coordinate the cleanup effort for the Deschutes National Forest. Most of the junk volunteers found and ultimately removed was riddled with bullet holes.

"Basically, the people that come out bring things to shoot at, and then just leave them and you end up with that litter," says Steve Westberg of Toyota Landcruisers of America, who volunteered in the cleanup effort.

Westberg says when people see it, they bring more of it. "I think it attracts people who see the litter here already and think they don't have to go to the dump. They feel they can come out here for free and get rid of trash."

Jenkins concurs. "It's very accessible for folks in town. You'll find trash on most of the side roads in this area."

This was the second annual cleanup for the club, which targets several areas around China Hat. The club's vice president, Jeremy Evans, says, "We filled up three trash bins last year and we had three or four vehicles towed out by a local tow company. It's absolutely amazing how much gets left out on public land like this. We want to leave it better than when we found it." 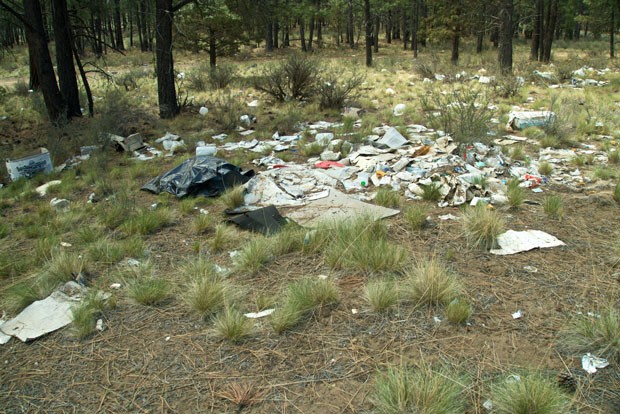 The Landcruisers, along with other non-shooting user groups, are hoping officials from the Deschutes National Forest will make changes in how user groups recreate in the area, in an effort to avoid trashing the area.

"They're hoping to get this shooting area around Coyote Butte turned back into an OHV (Off-Highway Vehicle) play area and maybe get a designated shooting area somewhere else," says Jenkins of Deschutes National Forest. "This is an area in close proximity to residential areas and there are some complaints from them, and so they're hoping to find a good area for shooters to go."

Cleanup volunteer Steve Westberg agrees. "This area is also close to where the mountain bike trails run through. I know the Forest Service is thinking about Cabin Butte rather than Coyote Butte as the designated shooting area. That's farther away from any of the trails that are going through the area."

Cabin Butte is also farther away from the proposed OHV area and would provide separation—thus avoiding potential conflict for the user groups which includes hikers, mountain bikers and equestrians.

Cleanup volunteers and recreational user groups are realistic about changing recreational areas along China Hat to improve the area. Changing its use would be a long process involving much public input, requiring a major shift in attitude to improve an area abused for decades.

"We're all trying to work together," says Evans. "We all love the land. We all love using it in different ways. We have too much divisiveness in our country as it is, so if we don't work together to be able to use it, keep it clean and take care of it, we'll eventually just lose it all."

Brian Jennings is host of "The Great Outdoors," seen on KOHD (ABC) Wednesdays at 6 pm and KBNZ (CBS) at 7 pm on Central Oregon Daily.

Editor's Note: The original version of this story listed Brent Jenkins' name as Brett. We regret the error.