Next Stop, The Motet | The Source Weekly - Bend, Oregon

Next Stop, The Motet

The Motet is an all-star-studded funk, jazz and Afrobeat band out of Denver, Colo. The members have gone through various looks over the years, with the latest lineup putting out a brilliant funk record called "Death or Devotion." It seriously sounds like a time machine – one powered by dance, anyway.

Lead singer Lyle Divinsky took some time out of his day of enjoying Super Bowl leftovers to chat with the Source about the new record, his road to finding his voice and ultimately, to finding The Motet as well. 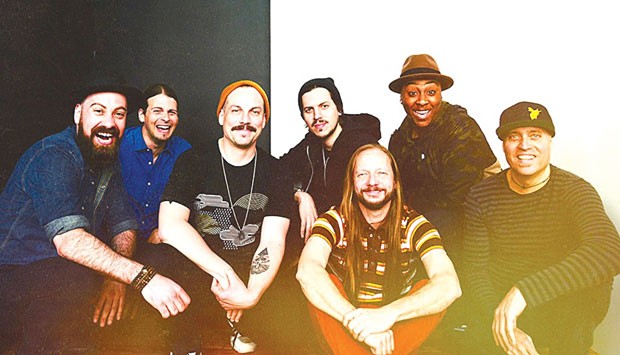 Source Weekly: You teamed up with The Motet back in 2016. What's it been like being a part of that?

Lyle Divinsky: Oh man, it's been a whirlwind. I was living in New York before joining in with these guys, living in Brooklyn. I've spent a lot of my time in New York playing in subways and working my way up literally from the bottom. To go from getting the call from The Motet, from playing subways to headlining Red Rocks is like my childhood dream come true. It's almost storybook sh*t.

SW: Your dad was also a singer. Have you always been drawn to music?

LD: He's my favorite singer in the world. Like any kid you kind of rebel against your parents, even if they're like way cooler than you. I was pretty convinced I was going to be a basketball player. Singing was always his thing. He was always really good at it, so I was kind of intimidated by it. I didn't start singing until I was like 16 or 17.

Funny enough, it was actually through basketball. I was kind of messing around with my coach being like, "Hey, are you gonna let me sing the national anthem?" Expecting him to be like, "Shut up and go run," but he was like, "Yeah, I'll go line it up right now." It completely backfired on him 'cause it was actually kind of fun.

SW: The Motet just put out "Death or Devotion." What was it like working on that?

LD: That was incredible, man. This is a very true representation of The Motet right now and what's been inspiring us. The thing that I love and really admire about The Motet and the community around it is the understanding that the only constant is change. There are no walls or boundaries. This record was very freeing.

SW: One of my favorite songs on there is "Get It Right." Is there anything special you can tell me about the track? Because it's over seven minutes of this awesome groove.

LD: It was one of those songs that kind of wrote itself. Once I heard what they [rhythm section] had done to it I think I just got up in my room and was like dancing around with no pants on. I headed down immediately and just started recording the demo vocals.

SW: What makes you love funk and soul so much?

LD: It just feels good, man. I look at funk and soul as two sides of the same personality. Funk is the extrovert, the party, the social interaction – and then soul is the introvert. The reflection, the sensitivity, the vulnerability. With this record we wanted to find a way to really marry both of those.