No Cause, No Problem | Local News | Bend | The Source Weekly - Bend, Oregon

No Cause, No Problem

Without the ability to evict, landlords resort to more informal means to kick out tenants

On Sept. 23 Paul Parrish got a letter from his landlord telling him that he'd have to evacuate his home the day before Christmas Eve or face eviction from his single-wide trailer in Sunriver. The U.S Army veteran lived there for 13 years, and watched it gradually sink into disrepair as the now 50-year-old home neared the end of its lifecycle.

The front deck is rotted to the point that FedEx won't bring packages to the door. Water seeps in through the roof when it rains. The front door doesn't fully shut. The refrigerator is broken, and Parrish has to constantly transfer food to the freezer and back to make sure nothing spoils. The hot water pipes under the house leak, so they're kept off unless needed to avoid sky-high utility bills. There's no ventilation in the kitchen and smoke fills the house whenever he cooks. 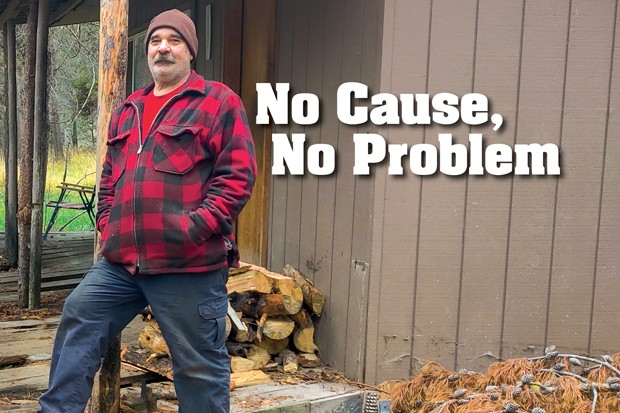 "I've actually talked to him about this and a whole bunch of other stuff, but they never did nothing," Parrish said of the landlord. "It's like they couldn't care less, and I didn't push it because I have more of a fear of, they might just kick me out, and then where am I going to go?"

With little support from the landlord, Parrish took maintenance upon himself. He's fixed busted pipes under the house, reconnected the power line to the house and paid arborists to cut down a tree that could collapse on the roof.

"You would think that they would appreciate the fact that I've never messed with them at all, and they haven't had to spend any money," Parrish said.

This isn't the first time Parrish's landlord served him an eviction notice. Over a year prior, on Sept. 1, 2020, a letter informed him of the landlord's intent to demolish the premises so a 2,000-square-foot home could be built as the landlord's primary residence. A no-cause eviction was unlawful at the time under Oregon's eviction moratorium effective June 1, 2020, and Parrish disputed it, starting a contentious relationship with the landlord and his attorneys.

"I can't believe these attorneys are supposed to be high-powered attorneys that know everything. But apparently, they must not know that much about evictions in the law. Because I hit him on that. I called him and told him that this 90-day is illegal," Parrish said.

The firm representing the landlord is Francis, Hansen and Martin, a local firm who recently represented homeowners on the River's Edge Golf Course. The firm insists they've conducted everything above board during the eviction.

"I'm just not sure what I'm retaliating against," said Frances Mann, the lawyer who sent the most recent eviction notice.. "We're allowed to send him the notice under the law, his landlord wants to move back to the properties, and that's why I've sent the notice." 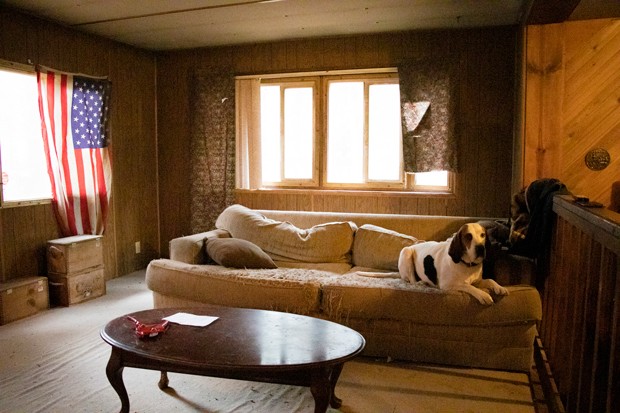 Tenants are entitled to 90-day notices in Portland, Milwaukie and Bend. Parrish said the attorneys were hostile during the first attempt but eased up after he filed a complaint with the Oregon State Bar, which he retracted after the lawyers abandoned the eviction order. Understanding that he would have to move soon, Parrish found a new rental in January of 2021. He'd offered to pay the whole lease up front, and the deal was almost done until his current landlord gave a bad reference.

"I could of [sic] been out February 2021 but he gave me a bad reference by saying, 'even though there's been a problem getting him to vacate I'd still rent to him again.'  Nobody wants to hear that on a rental," he wrote to the landlord's attorney.

"If you remain on the Property past the 90 days, then I will be left with no option but to file a civil suit to have you removed from the Property, which may result in costs and attorney fees you will be responsible for. Either way your tenancy will not be extended or continued at the Property," a letter from the attorneys said. "How you choose to leave, with more cash in your pocket or not, is completely up to you."

Parish, unable to find a new place in 17 days and not satisfied with the $1,300 offer, declined. He believed the timing of the eviction, threatening to withhold his security deposit and the allusion that he'd get bad references if he didn't remove himself were attempts to retaliate after he refused the first eviction attempt and complained to the state bar association.

"It's kind of like they purposely did those dates just to mess with me, saying we're going to mess up this guy's Christmas, too, we're going to make it so you can't celebrate Christmas," he said. "If you ask me, that's tenant retaliation on their part."

“We know that landlords are harassing people, and that is a form of landlord-based eviction. We know this, because tenants have been telling us this when we survey them.”—Kim McCarty tweet this

Oregon law prohibits landlords from retaliating against tenants by increasing rent, decreasing or stopping services or threatening to evict a tenant because of tenant complaints to the landlord or a governing body, asserted their legal rights as tenants, joined or started a tenants' union or won an eviction case in the last six months.


"I can certainly say that kicking someone out just before Christmas is certainly an act of cruelty, and I think some courts, if it were brought that week, might ask the landlord to make accommodations, acknowledging circumstances, like it's too cold, or this is profoundly inconvenient, where is someone going to be able to find housing this time of year," said Kim McCarty, executive director of the Oregon Community Alliance of Tenants, a group that organizes, educates and advocates for low income tenants in Oregon. "In some states it would be illegal. Unfortunately, that's not the case in Oregon."

Oregon's eviction moratorium expired on June 30, and there wasn't a massive increase in evictions filed as some predicted. McCarty believes that the numbers may give a false impression that Oregonians aren't at threat of evictions.

"Some people, looking at the numbers, would say that the number of evictions are not happening at the rate comparable to what they were last year, but that's not really a fair comparison," McCarty said. "We still have thousands of people that we know are eligible, that we know are in economic distress, because the landlords are telling us that. The rent hasn't been paid, they have not applied for emergency assistance. So logically, those folks are at this risk of eviction."

Without the ability to evict during the pandemic, some landlords took more informal approaches to force tenants out.

"We know that landlords are harassing people, and that is a form of landlord-based eviction. We know this, because tenants have been telling us this when we survey them," McCarty said. "When we look at the Forced Entry and Detainer filings (the formal name for evictions) from the landlords, the number of filings that are deficient, and what I mean is that they were not filed correctly, that the landlord did not follow the law or the policies for how you would do an eviction, all of these things together tell us that that people are losing their housing. And it may not be that the number of FED filings are the indicator of how many people are losing their housing, because many people are being evicted by other means." 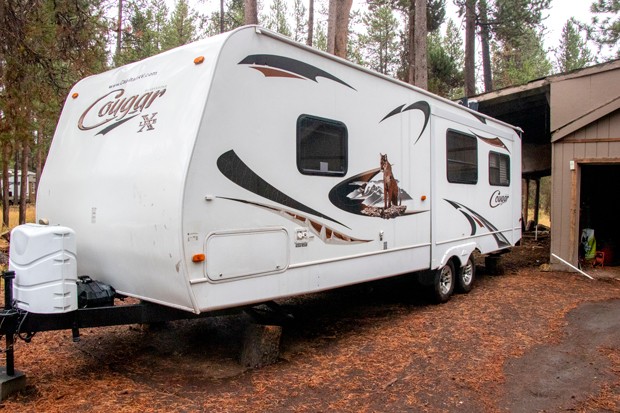 Those other means can come in many forms. One renter in Bend, who requested anonymity to avoid further confrontation with her landlord, says her rights are routinely violated. Her landlord has entered the house without notice, raised rent without proper notice and asked the tenant to leave multiple times. After the rent was improperly raised, the landlord placed the tenant on a month-to-month lease. The tenant suspects they're trying to kick her and her family out so they can cash in on Bend's real estate boom.


"She wrote me saying, 'You're not on a lease anymore, you're on month to month, because you failed to sign the lease addendum. And that's good for you because you can just give me 30 days' notice, and nobody's happy with you being here,'" she said. "I don't want 30 days. I want to have a lease. We are happy here. And every time they've tried to say, 'you can just go.' Then I realized that they're selling the house and that's why they're trying to get me out."

The tenant hopes to avoid any legal trouble and is in the process of purchasing a home. Parrish, however, has no such reservations. He said he's willing to take the issue to court if they don't refund his $950 security deposit.

"All I'm really asking for is I want my $950 back. I'm thinking that should be fair," Parrish said.

The impact of the eviction drained Parrish of his savings. He saved up over $10,000 for dental health, but instead spent it on a fifth wheel trailer so he'll still have a roof over his head if he's evicted.

"I was going to get my teeth all redone, and I hear it was going to be about $10,000 from what I understood," Parrish said. "I went and spent 10 grand on that trailer, just so I have something to live in. I can't even fix my teeth."

The eviction process has been stressful for Parrish, but he said in an odd way it helped motivate him out of a bout of depression. If Parrish ends up going to court over the eviction, he'll be facing experienced lawyers in a legal system more tailored to landowners.

"If a tenant is low income, chances are they have no legal representation. Even if you're not low income, most people come to court with no legal representation, no understanding of the law. So that right there puts a person at a huge disadvantage," McCarty said. "Tenants do not fare well in landlord-tenant court. First, because they're not represented. Secondly, because the laws are not in their favor."

Related Evictions Ahead: A predicted surge of evictions hasn't come yet, but protections are expiring

Evictions Ahead
A predicted surge of evictions hasn't come yet, but protections are expiring
By Jack Harvel
Local News