No Farms Without Water

July 15, 2020
10 comments
Driving north on Highway 97 toward Madras, fields of carrot seed and alfalfa stretch out toward the horizon. The farmers that work this land rely on a century-old irrigation system that’s starting to dry up. This summer, like last, the majority of the region’s 400 farmers will be forced to leave some land fallow because of light snowpack and low precipitation this winter. 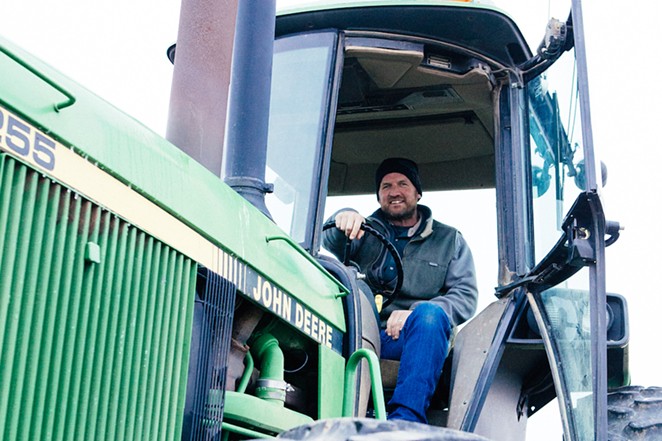 One way to help the farmers get more water in the future is through piping irrigation canals in the region. This prevents water from seeping into the ground on the way out to farms and other properties. On July 9, an ambitious piping modernization project was approved by the federal government. This will convert 7.9 miles of large, open canals in Central Oregon into an underground, closed-pipe system, reducing seepage by an estimated 29.4 cubic feet per second, according to a recent press release from the Farmers Conservation Alliance.
In a complex water swap, the farmers near Madras will get more water during farming season, but give an equal amount back to the river in the winter. The project will improve the habitat of fish and the Oregon spotted frog in the Upper Deschutes.


There’s lots of water in the river at the Old Mill. But if you see that and then go and have a drink on the deck at the Riverhouse, it’s hard to understand that it’s the same river. Ninety percent has been diverted. Now it looks more like a creek. - Tod Heisler, COLW tweet this

The intricacies of this exchange provide a quintessential example of the cooperation that is needed between environmentalists, farmers and local irrigation districts to keep the Deschutes River healthy while also helping local farmers grow food.

Phil Fine rotates carrot seed, bluegrass seed, alfalfa, hay and small grains on his farm north of Madras. His property is part of the North Unit Irrigation District—the largest district in the state—covering 60,000 acres. These farms are fed with water from Wickiup Reservoir, the Deschutes River and the Crooked River.
The NUID shares water with hundreds of property owners near Bend who mostly use it for watering lawns, raising a few animals or filling ponds. Without the water, this land would look like the rest of the high desert, dotted with sage brush and a few juniper trees. Instead, these properties look lush and inviting, boosting their real estate value. 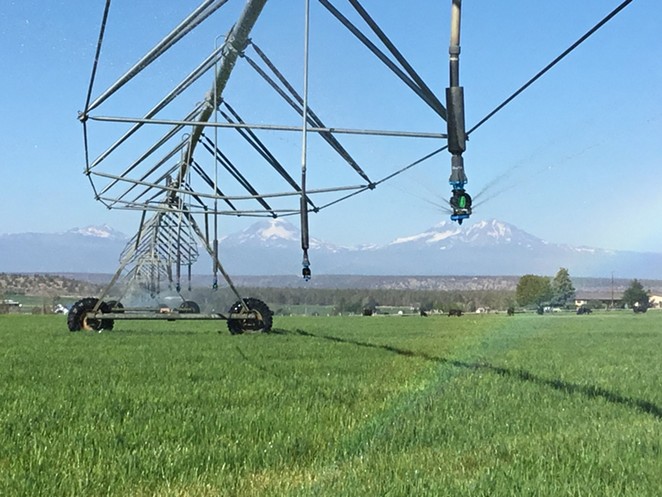 For the second year in a row, the managers of the eight irrigation districts of the Deschutes River basin declared a severe drought. While water rights holders near Bend (in the Central Oregon Irrigation District) will receive more than enough to keep their pastures green, the commercial farmers of Jefferson County will make due with just 1.25 acre feet—far less than their farms need.
An acre foot is the amount of water it takes to cover an acre of land in a foot of water.

“Two acre feet in this country isn’t enough to make it work, but we’ve had to,” Fine explains, detailing an elaborate system of water conservation methods he uses, such as pumping water run-off back onto his crops.

“We’ve taken the most inefficient form of irrigation and maximized its full potential,” Fine said.

Many farmers like Fine in the North Unit use highly-efficient sprinklers and drip irrigation to target the plant roots.

On a normal year Fine will get 2 acre feet of water. Farmers getting water from NUID officially have rights to four, but it’s been decades since they’ve seen that much. This year, Fine will get 1.25—meaning he’ll have to leave 25% of his land fallow. Fine attributes this to a changing climate, though he doesn’t believe the warming is a result of human behavior.

What are water rights?

“The story starts with water rights in the state,” said Tod Heisler, river conservation program director for Central Oregon LandWatch. “Most of these were established around the turn of the century. It’s first in time, first in rights. The water rights of the districts right around the City of Bend are the oldest and hold senior water rights, so they get priority. Most water rights holders in Madras and Culver were established in 1913, yet they are still considered junior.”
The water rights system was first established to help white settlers who claimed land on the Deschutes River to start subsistence farms and raise cattle, Heisler explained. As new settlers came in, they took land farther away from the river, and began building a complex system of canals to divert the flow out to their farms. 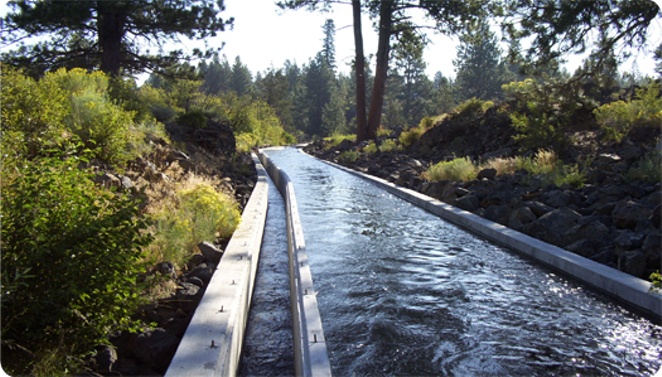 But the farms near Madras needed more water at the right time than they were getting from the natural flow of the Deschutes River. In 1949, U.S. Bureau of Reclamation damned the Deschutes and created Wickiup Reservoir to store the river’s water for use throughout the summer. The bureau promised 70% of this “reclaimed” water to farmers in NUID.

This year, like last, Wickiup only filled to two-thirds of its capacity, according to Craig Horrell, the managing director for COID. People with water rights in the Central Oregon Irrigation District are entitled to their full amount first, and what's left goes to NUID.

In the winter months, the dam at Wickiup Reservoir blocks flow in the upper part of the river and flow may sink down to 100 cubic feet per second. By the time it hits Bend, tributaries and natural springs add to the river and it rises to an average of 550 CFS through the city, through the Middle Deschutes and to the dam at Lake Billy Chinook.

In summer, Wickiup Dam is released to provide Madras farmers and water-rights holders near Bend their water. But in order to meet the irrigation needs of water rights holders in COID and NUID, the Deschutes is diverted shortly after flowing over First Street Rapids, just north of downtown Bend. Both canals begin near a tiny overlook off NE Division Street.

“There’s lots of water in the river at the Old Mill,” Heisler of Central Oregon LandWatch explained. “But if you see that and then go and have a drink on the deck at the Riverhouse, it’s hard to understand that it’s the same river. Ninety percent has been diverted. Now it looks more like a creek.”

In the summer, the water in the Middle Deschutes—the section north of Bend and before Lake Billy Chinook—sinks to between 130-160 CFS, down from its historic flow of 1,000 CFS, Heisler said. 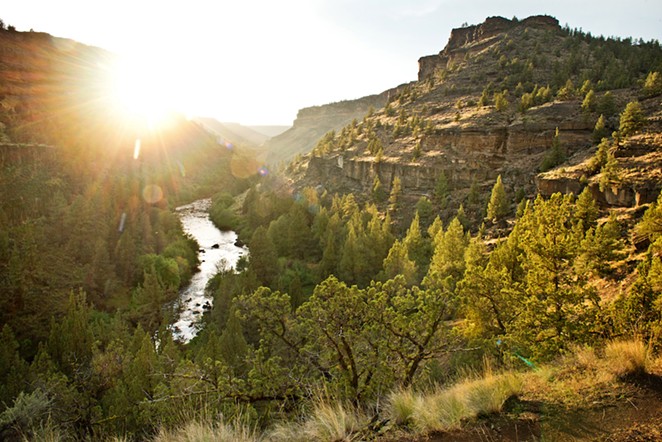 This pattern of wildly fluctuating drought and flood flows and impassable dam systems have decimated fish and wildlife populations along the watershed.
“The dam and reservoir system were designed by the federal government to use the Deschutes River as a conveyor belt for water,” said Fine, whose farm is one of the farthest away from the river’s origins.

He sits on the board of the Deschutes River Conservancy, an environmental group that says the river is being managed more like an irrigation canal than a natural flowing river. An avid fisherman, Fine keeps one foot firmly planted in water conservation and the other standing up for the interests of commercial farmers. He’s also a board member of NUID.

The U.S. Department of Fish and Wildlife declared the Oregon spotted frog threatened (under the Endangered Species Act) in 2014, which triggered WaterWatch, and the Center for Biological Diversity to file lawsuits against the irrigation districts and the U.S. Bureau of Reclamation. As a result of the law suits, the NUID was forced to release more water from Wickiup during the winter.

More recently, another major conservation effort has been underway with the U.S. Department of Fish and Wildlife, environmental groups and the irrigation districts. The Habitat Conservation Plan would guarantee minimum flows on the river to help maintain threatened species of steelhead and trout, while also helping the frog.

“Central Oregon LandWatch got involved because we see this as what we describe as a once in a lifetime opportunity,” said Ben Gordon, COLW’s new executive director, and a recent guest on the Source Weekly’s “Bend Don’t Break” podcast. “Once this plan goes into effect it is in place for 30 years and it actually provides some accountability for the irrigation districts. The initial proposal was not strong enough to sustain the in-stream needs of the river.”

An elaborate canal piping plan for Central Oregon is also underway that will cost an estimated $1 billion in taxpayer money and take 30 years to build, according to Heisler. Piping the canal system prevents the water from seeping into the ground, he explained. Heisler, like some other environmentalists, are generally in favor of piping to save water and restore healthy flows to the river. But Heisler said piping is expensive but will take too long, and will largely benefit the senior rights holders in Deschutes County, who aren’t using the water for the public good.

“This water is not being used to benefit the population of Oregon; the public owns it,” said Yancy Lind, and avid fly fisher and environmental activist who sits on the board of WaterWatch.

“There are no economically viable farms in Deschutes County. They do it for fun. They get all the water they want because they are senior, with a big lawn, a horse, a pond. The farmers in Jefferson County have to let their land go fallow based on a what a bunch of people agreed to over 100 years ago.”

Craig Horrell, managing director of COID, disputes the assertation that his water users are all hobby farmers. COID delivers water to a high number of water rights holders on smaller plots of land, including providing water to keep the grasses at the Les Schwab Amphitheater and throughout the Old Mill District, for example. Only about about one-third of COID water users use the water to water lawns (considered beneficial use in Oregon), Horrell said. Meanwhile, one-third of COID users have lifestyle farms. Another third runs for-profit farms, growing carrot seed and raising cattle, Horrell said. 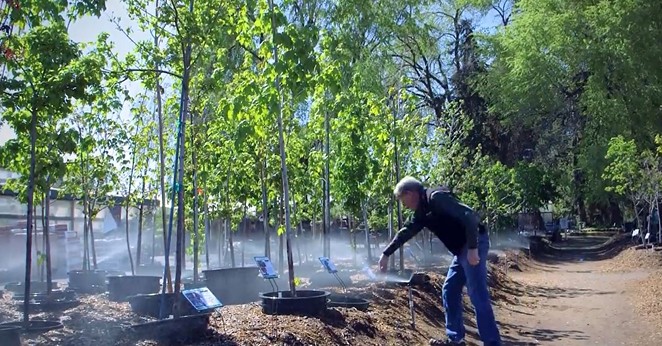 “I don’t like to call it hobby farming,” he said. “We have the largest 4-H participation in the state. This is a way of living where the land is used to teach kids how to raise animals. I’m not going to tell them that’s wrong.”

Horrell said he’s well aware of how COID is characterized among environmentalists, who he talks with on a regular basis. “When I started, I thought, ‘we can do this in a couple of years,” he said of the elaborate water conservation projects proposed by years-long collaborations between environmentalists, government agencies and water-rights holders. “But these are changing times; it’s like trying to move a huge ship through rough waters.”

Horrell said COID takes an aerial inventory of water use throughout the district on a regular basis and sends out hundreds of letters a year threatening water rights revocation for inefficient consumption. Unused water from successful conservation is offered to other rights holders in the district—so it doesn’t necessarily benefit the junior rights holders in Jefferson County, he said.

Horrell is feeling hopeful about the future of water conservation with upcoming projects like the forthcoming piping modernization project approved in early July. COID has also started an on-farm program with the Deschutes River Conservancy to help property owners in the district save water and then volunteer to put it back in the river.

“There are a number of things on the table right now that are the low hanging fruit, while others are legally impossible,” Horrell said. “Right now we’re working on a farmer-to-farmer lease so if someone in COID has a friend in the North Unit and wants to give them their water they can, though we’ll have to have the state approve it as a pilot project. We just need to pick someone to do it this year.”