No Rabbits. No Hates. Just Magic.

Identity exists in and of itself in this moving live show

I spent this entire week prepping to review the new Denzel Washington movie, "The Little Things," a throwback serial killer thriller also starring Jared Leto and Rami Malek. I was really looking forward to it since the movie looked like exactly what I was after: cinematic comfort food. Empty movie calories that reminded me of '90s thrillers like "The Bone Collector" and "Fallen," with a little bit of "Seven" thrown in the pot.

But then a friend recommended I watch some weird-ass little movie on Hulu called "In and Of Itself" and now I can't think about anything else. Magician/storyteller/performance artist Derek Delgaudio performed his one-man show 552 times at the Daryl Roth Theater in New York City from April 2017 to August 2018. Astonished, tear-filled audiences that walked in for a magic show came out different people with entirely new conceptions about themselves and the world. 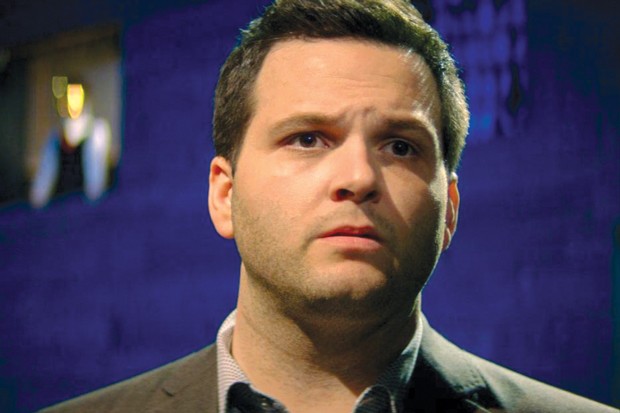 As people arrived at the theater, they would see 690 cards in the lobby. Each card began with the words "I am" and was followed by a profession ("An artist"), or a life choice ("A father"), or something a little more metaphysical ("A nobody"). I refuse to spoil anything further, but by the end of the performance, each member of the audience that took choosing a card seriously was revealed not only to the audience, but to themselves, as well.

I had never heard of Delgaudio and had no idea he was a magician, so when he starts adding illusions and simple, yet astounding, card tricks to his deeply personal and heartbreaking monologues about his childhood and his early life as a professional gambler, the entire show becomes a meta examination of our own identities and fragilities in the modern world. This isn't David Blaine levitating and pulling needles out of his chest or David Copperfield walking through the Great Wall of China; this is a very generic-looking white guy with tears streaming down his cheeks, laying himself bare onstage and healing himself and his audience at the exact same time.

Magician/storyteller/performance artist Derek Delgaudio performed his one man show 552 times at the Daryl Roth Theater in New York City from April 2017 to August 2018. Astonished, tear-filled audiences that walked in for a magic show came out different people with entirely new preconceptions about themselves and the world. tweet this

Here's the thing: Delgaudio is either the most honest and self-effacing magician who has ever lived, or he's the best liar I've ever seen. Directed by the legendary Frank (The Damned Voice of Yoda) Oz, the stage performance looks to have changed some of the lives and thought processes of people lucky enough to have been there. The magic inherent in this show has nothing to do with the illusions presented, but in the way Delgaudio focuses on the misconceptions of identity and perception. The magic is in how he makes people feel, not in what he makes them see.

None of this is done in a way that feels false and pretentious. "In and Of Itself" is elegant and moving, mesmerizing and transcendent; a warm hug for those of us deeply missing the live theater experience. This show is humanism at its finest and a reminder of the things we carry with us our entire lives and how they shape every single interaction we have.

There's so much more I want to say about this show but going into it completely blind to what is coming is such a joy. I was amazed by a trick one moment and had tears streaming down my face in the next due to the sheer compassion and empathy on display.

"In and Of Itself" is a profound and deeply moving experience. Share it with everyone you know. Even if they hate magic. Especially if they hate magic. In fact, find the most cynical, dour human being you've ever met, show them this, and, when it's over, hold them for a minute. Let's see what happens.

In and Of Itself
Dir. Frank Oz
Grade: A
Now available on Hulu