No Substitutions, No Ketchup

We're the Wurst serves up bites so good, your neighbors might steal some 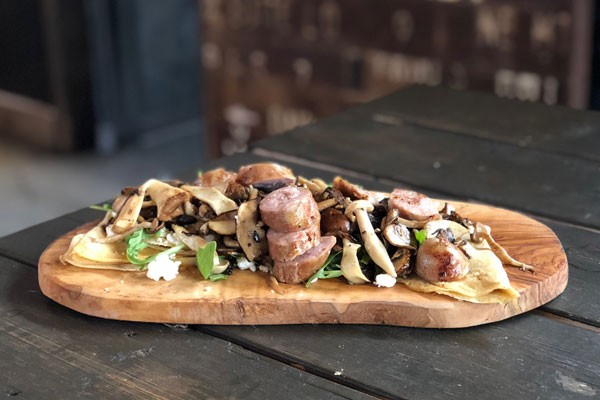 The antipasto plate was a feast for the eyes. We had tried a little of everything from the We're the Würst menu, so our appetizer was still piled high with crispy porcini pancetta, glistening herbed olives, snow white goat cheese, sweet dates and fresh white truffle arugula salad. Having saved room for dessert, I went out to order our sweet crepe as my dining partner, Lori Lubbesmeyer, grabbed us another round of drinks.

When I returned, Lubbesmeyer was acting different. our previously animated conversation now a bit reserved. We were sharing a picnic table inside Spoken Moto with a couple who had earlier told us they were hung over. When the couple got up to look around at the vintage motorcycles, Lubbesmeyer told me, "When I was ordering our drinks I saw her take a few nibbles from our antipasto plate." My eyes widened. Pretty gutsy on her part—we clearly weren't finished, my phone and notebook still on the table. Maybe the alcohol was still guiding her decision-making, or she simply couldn't resist the bounty of that antipasto platter. It was scrumptious.

Before serving European fare at We're the Würst, Cascade Culinary Institute graduate and native Oregonian, Matthew Fidler, was helping out at his family's furniture business. One day a lost woman walked in. Fidler cracked open a Belgian beer and started talking to her. Noticing his beer, the woman recommended he try her son-in-law's Belgian beer at Monkless Brewing. Fidler went on to tell her that he makes his own brats using Belgian beer. A month later Robin Clement, the woman's daughter and co-owner of Monkless Brewing, came in to try one of Fidler's brats. After tasting it, she said she wanted his brats at the brewery, so Fidler took the plunge and bought a food truck.

After a successful year at Monkless Brewing, Fidler decided to move to a higher traffic location. He's been slinging brats, crepes and pommes frites, better known as French fries, from the parking lot at Spoken Moto for the last six months. Fidler said, "I want to take you back 100 years with my food." The offerings are super traditional. Almost everything is made from scratch. The brat is served with house-made, organic sauerkraut and Dijon mustard on a potato bun. Don't even think about asking for ketchup: a carved wooden sign on the front of the cart reads, "no substitutions, no ketchup."

We tried the brat on the master crepe, a special that changes with the chef's whim. This one had creamy, tart goat cheese, arugula and earthy trumpet mushrooms. The bratwurst was soft, juicy and lightly seasoned, the casing barely noticeable. Comfort food isn't normally considered "light," but it was. The brat's flavors were delicate. The no ketchup sign made sense. Dijon would enhance these flavors. Ketchup would drown them.

You won't get ketchup with the pommes frites, either. They're Belgian style, double fried, topped with a mayonnaise and served in a paper cone with tiny forks. The forks came in handy because the lemony shallot aioli pooled into the crispy potato sticks makes them messy to eat.

Save room for dessert at We're the Würst. Fidler makes Liège waffles dipped in caramel or ganache, a chocolate and cream glaze. The waffles are made with coarse pearl sugar that caramelizes into crispy sweet bits inside the waffle. We ordered the lemon, cardamom and honey crepes, served with a dusting of powdered sugar and lemon wedges. It was a wonderful, bright, sweet treat to end our meal—even in spite of the theft. 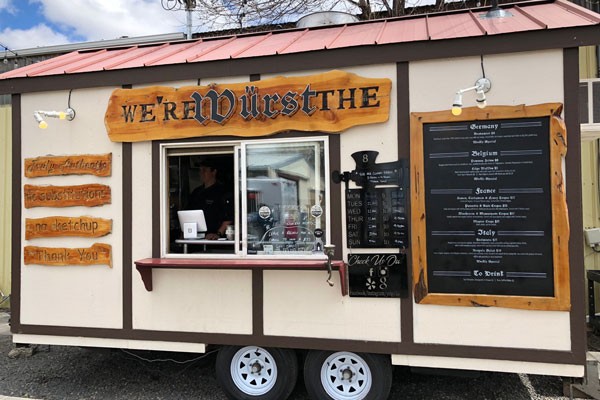